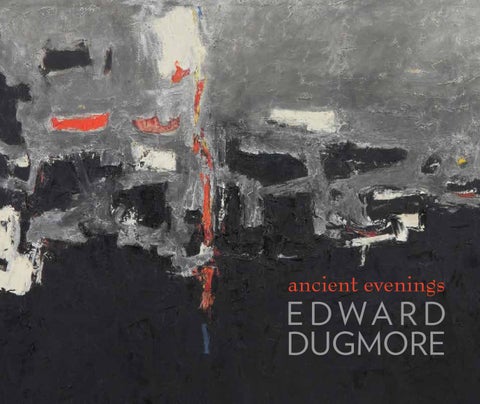 FOR Edward Dugmore, painting and life formed inseparable practices. The son of a photographer, he spent countless hours helping his father develop negatives in the family’s makeshift darkroom. He began drawing as a child, and with his mother’s encouragement entered the Hartford Art School with a full scholarship in 1934. There he received a classical training, studying the Renaissance masters and learning to grind his own pigments (a process crucial to his painting throughout most of his life.) Following graduation he spent a summer at the Kansas City Art Institute studying with famed regional artist Thomas Hart Benton. In 1943, like so many men of his generation he joined the United States Marines. In 1948 he moved to San Francisco where he attended the San Francisco School of Fine Arts on the GI Bill and founded the influential Metart Gallery. It was there, working alongside artists like Sam Francis and Richard Diebenkorn and under the dynamic and furious tutelage of Clyfford Still, that Dugmore inherited his full potential as an American painter of the postwar era. Though New York was to accept the torch from Paris as the new international city of Art, San Francisco enjoyed an important moment as a potent and equally fecund incubator for radical painterly invention. Still’s words would become foundational for a career based on artistic integrity and painterly ambition: Detail from Threshing Wheat by Thomas Hart Benton (1938-1939). All rights reserved T.H. Benton and R.P. Benton Testamentary Trusts/ UMB Bank Trustee — Licensed by VAGA, New York

We are now committed to an unqualified act, not illustrating outworn myths or contemporary alibis. One must accept total responsibility for what he executes. And the measure of his greatness will be in the depth of his insight and his courage in realizing his own vision.

As if to match his surrounding landscape, Dugmore began to expand the scale of his canvases. Working with a pallet knife he seemed to scrape away “the husk of visual form” laying bare raw expanses of luminous pigment. Asked about his experiences years later he explained: The whole feeling was huge. You felt huge. You felt all encompassing. Like the wrong end of a telescope. Instead of going into it, you sort of expanded in conversation, in ideas. It was a great lifting kind of experience. He spent the next two years in Mexico with his family, where he earned his masters degree from the University of Guadalajara. In 1952, with the last of his GI Bill funding running out, he joined his fellow artists in New York. He drank with Pollock, de Kooning, Kline and others at the Cedar Bar, enjoyed picnics, dinners and late night talks with the always sober and fastidious Still and debated theory with Mark Rothko late into the night. Already a ubiquitous figure in the downtown scene, he enjoyed his first of three solo exhibitions at the seminal Stable Gallery, which was lauded by peers and critics alike. During this time he played a central role in the milieu surrounding the gallery. He often worked as a carpenter for owner Eleanor Ward, helping hang exhibitions and often sleeping in the abandoned hayloft, that had earned the gallery its name. It was here that Dugmore’s paintings became more frenetic and compacted though they maintained the intense chroma and dramatic sense of scale learned on his western sojourn. In Untitled, 1958 the devastating heat and intensity of the desert radiates through compressed urban frenzy. The roiling surface of red is woozy with pleasure, wavering in the air while the thinly knifed white drifts to evaporate at the bottom of the canvas. There is a jubilant fervor in the passages of white, yellow and red that immediately calls to mind the jazz of Thelonious Monk and Sonny Rollins, whose performances Dugmore would often watch at the legendary 5 spot, near his Lower East Side apartment. Though he would continue to call New York home, he once opined, “I’m not an urbanite — I don’t paint New York. My back yard goes to the West Coast.” Silver Gray and Black (1958) is a stark coun-

terpoint to the often hyperbolic action painting which became a mainstay of New Yorkâ&amp;#x20AC;&amp;#x2122;s downtown scene during the late 1950s. Lushly painted with undulating fields of silver and black, one canâ&amp;#x20AC;&amp;#x2122;t shake the sensation of staring across a great distance into the night sky. Skeins of grey and silver sketch themselves across the top of the picture with an almost lazy rhythm. These are monumental forms laid bare just beyond our field of vision. We feel the pastoral elegance of the modern skyline and the ancient beauty of the American mountain range. We are grasped by an intoxicating sense of mood, the feeling of greatness glimpsed momentarily through the drifting embrace of fog.

Dugmore traversed the country several times throughout the next decade as a visiting artist and artist in residence. His time spent at the Aspen School of Contemporary Art in 1961 provided the artist with a striking visual reference. The panoramic sense of scale in Untitled, 1960 foreshadows his trip to the Rockies. His familiarly sensuous surfaces are shot through with jagged rivulets of deep blue. The entirety of this shifting image is held together at top and bottom by haunting contours of burnt red. The experience conjures the magical effect of reflected water in a landscape. We feel the tectonic force of the North American continent as it unfolds around us, as well as the hard-won wisdom of the artist as he contemplates his surrounds. The drama of these forms elicits association with his longtime mentor Clyfford Still and the romantic writings and illustrations of his poet-hero William Blake.

Dugmore’s horizontal pictures from the 1960s recall our heightened experience of the natural landscape. His 1970 series of monumental vertical nudes similarly distills our physical experience. The sensation of the human body is lushly wrought in fleshy surfaces of cream, red, black and white. His forms wrestle across the entire surface, playing out a visceral dance of ethereal line; a time lapse love song. One might be forgiven for hearing in these paintings the lyrical, sensual complexity of Beethoven. The artist often painted with music, and had long found comfort and companionship particularly in the quartets. The artist continued to paint tirelessly throughout the rest of his life. His later works are filled with a sense of memory as the artist expressed the self-reflective process of growing older. His canvas Ancient Evenings was painted in 1984, the year after the publication of Norman Mailer’s controversial book of the same title. Mailer’s meditative prose is steeped in ancient myth and treats with themes of life, death and reincarnation. Upon the death of his closest friend, Ernie Briggs, the artist scraped away the top third of this painting. His delicately knifed span of gold and pink are an allusion to his comrade’s most recent painting. Upon finishing this homage the artist was visibly less pained. Though it marks a somber occasion, this story serves to remind of the transformational power of a life dedicated to art. Dore Ashton wrote in her catalogue essay Burning Bright: Paintings 1950–1959: Throughout his painting life, Dugmore has challenged himself to locate and express his most delicate feelings in the most truthful way he could. These paintings speak a language that emerged from a set of legitimate beliefs, and their astonishing freshness and power, still today, bespeak a characteristic that I do not hesitate to call authenticity. This is what Dugmore offers; a world that swallows us whole, where we remain suspended in the balance between tension and beauty, joy and bodily impact. n

The Tyger William Blake Tyger, Tyger, burning bright, In the forests of the night: What immortal hand or eye, Could frame thy fearful symmetry?

What the hammer? what the chain, In what furnace was thy brain? What the anvil? what dread grasp, Dare its deadly terrors clasp!

In what distant deeps or skies. Burnt the fire of thine eyes? On what wings dare he aspire? What the hand, dare seize the fire?

When the stars threw down their spears And waterâ&amp;#x20AC;&amp;#x2122;d heaven with their tears: Did he smile his work to see? Did he who made the Lamb make thee?

And what shoulder, &amp; what art, Could twist the sinews of thy heart? And when thy heart began to beat, What dread hand? &amp; what dread feet?

Tyger, Tyger, burning bright, In the forests of the night: What immortal hand or eye, Dare frame thy fearful symmetry?

Loretta Howard Gallery is pleased to present a retrospective exhibition of paintings by Edward Dugmore. Major canvasses from each decade trace the trajectory of his life’s work over more than 50 years of painting. Archetypal works from the 1950s and 1960s exemplify the artist’s romantic vision of abstract expressionism. In these paintings we see the influence of former teacher and lifelong friend Clyfford Still who he studied under at the San Francisco School of Fine Art but also the frenetic energy of the New York School. When the artist moved to Manhattan in 1952 he quickly became a central figure of the downtown art community. He was a regular at the Cedar Bar alongside Jackson Pollock, Willem de Kooning and Franz Kline and enjoyed three solo exhibitions at the seminal Stable Gallery.