David Row: There and Back 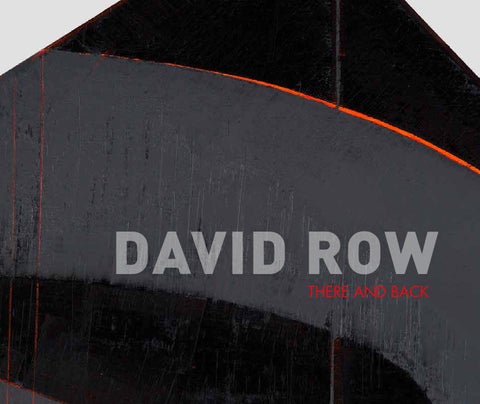 Along with other painters of his generation — Ross Bleckner, Philip Taaffe and Jonathan Lasker — David Row felt that the task was not to bury modern painting but to reinvigorate it and reinvent it. His work invites viewers into a dialogue about what a painting is and about the many ways a painting can be read. He knew that there were — and still are — many important questions to be asked and answered. Born in 1949 in rural Maine and educated at Yale, Row had an epiphany that set him on the trail to becoming an artist in 1969 at the Metropolitan Museum of Art. Henry Geldzahler’s exhibit, New York Painting and Sculpture: 1940–1970 so intoxicated him that he decided to go to graduate school at Yale and study painting in earnest. But, once there, he found the narrow academic climate stifling, and he left to spend a year in India to join his parents. They had been living there for years, his father working as a city planner. That was a second awakening. He found himself drawn to certain non-Western ideas, particularly the Indian concept of infinity, which he felt he could incorporate in his work, expanding the formalist definition of abstraction both visually and metaphysically. The search for a new language can be traced as a free-associational hopscotch from Bauhaus and de Stijl through Mondrian and the New York school as practiced by AI Held, who briefly had been his advisor at the Yale Graduate School. He also began to turn to other art media for inspiration. He particularly loved the process-driven “look” of printmaking, its seriaIity and rigid architectonic restrictions. He adapted these qualities to his painting program, weighing printmaking’s inherent feeling of mechanical coldness and distance against the hands-on sensuality and lushness of oil as a medium. Thingamajig (detail) 3

Row also began what became his signature practice of working with a set of ellipticallyshaped templates, curved hard-edged cardboard guides from which he could trace shapes, then flip them over and create mirror symmetries. The templates became a tool for generating ideas about structure. Row used them in an exploratory manner, whereby the shapes began to suggest their own logic and to influence Row’s iconography of their own accord — a process not unlike Frank Stella’s use of a protractor in his famous Protractor Series of the late 1960s. With Row, the templates could remain the same — a given — while the work transformed itself around them. From the world of science, he seized upon J.D. Watson and F. H. Crick’s 1953 model of DNA, with its twisting and ladder-like form. From the world of art, he re-examined Brancusi’s 1918 Endless Column sculpture, a geometric totem defined by its sharply zigzagging silhouette. Row’s reliance on these forms to build a visual vocabulary derived from his desire to “break open” the language of geometry. Yet his stated means remained simple and pragmatic. His dictum, he says, was: ”Make a shape. Flip it over. Flip it around again.” He remembers being especially taken with “acompositional” and “continuous” structures. Two questions arose. First, could a structural “whole” be synthesized completely through an assembly of fragments? And second, could traditional associations of symmetry — from biological configurations through the history of hierarchical architectural orders — be visually subverted? Both issues arose from Row’s desire to question the viewer’s expectations. He rightly believed that these geometric schema carried with them a sense of anticipation, a prospect of baIance or order that could be gently tweaked, subverted or denied outright. In 1990 Row broke his paintings out of their conventional rectilinear format. He introduced what he terms a “divided triptych” structure. Here, three self-contained rectangles abut. Each piece contains a fragmentary image which, when viewed with its reciprocal units,

suggests a larger whole. Issues of fracture vs. continuance are brought into new tensions. Like the stone plinths of a Roman architectural ruin, the lone parts suggest a much larger sense of weight and structure. Each panel offers a clue to a bigger, more complex edifice. The divisions heighten the sensation of ad hoc motion. Issues of unity, disunity and velocity are reinforced by Row’s paint handling: The surface is by turns slathered, blotted, smeared and scraped. The paint has an authority all its own that exerts its own physical nature, expressing a gestural attitude antithetical to the rigidity of its geometric confines. With his triptych series Row found that his ideas became more concise. The parts are “provisional,” posing an open question meant to provoke a viewer’s “desire for completion.” Also, the forms themselves became “infinite” and the segmentation doesn’t intrude on that condition. Here, Row’s work is counterpoised against Stella’s shaped canvas series from the Copper Series, first shown at New York’s Castelli Gallery in 1962, In those paintings, Stella’s internal stripes were configured to conform to the irregularly-shaped outer stretcher bars. With his current shape and triptych series, Row brings his structural interest in segmentation into concrete form. Excerpt from Continuous Model: The Paintings of David Row, published Edition Lintel, Munich. Verlag Robert Gessler, Friedrichshafen, 1997.

David Row: There and Back

Loretta Howard Gallery is pleased to present a catalog in conjunction withDavid Row: There and Back featuring text by John Zinsser.