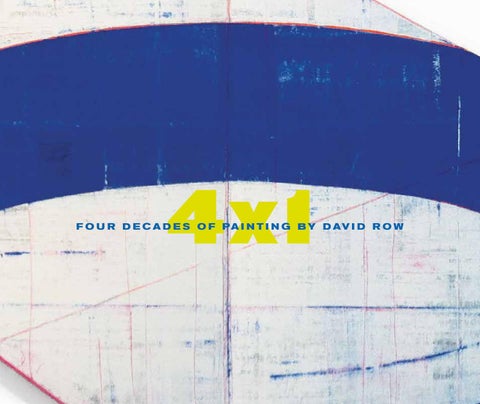 A snapshot of four decades of painting: From Row’s move to New York City in 1975 until his survey show at Loretta Howard Gallery 1976 1. After graduate school at Yale, David Row moved to New York. While living on Wooster Street in Soho, he shared a studio space in Chinatown with artist and friend, Sandy Skoglund.

One question seems to form the consistent core of David Row’s work, at least since I first became acquainted with it in 1987 and more dramatically since about 1990. The question is this: When and how does a painting, which has multiple parts, form a whole, a unity? Naturally, the question itself turns out to have parts, hidden ones even, and these place its own unity into question: Is the question concerning a painting’s wholeness really a single question? For instance, what appears at first to be a question about the painting’s form unexpectedly (but is it really so unexpected?) turns out to be also a question about its color. And if there’s anything we know after centuries of debate about the relation of form to color, it’s that no one has ever arrived at a wholly satisfying solution to that issue. In a curious and (as far as I can tell) rarely remarked passage from The Critique of Judgement, Kant specified that “sensations of colors and of tone have a right to be regarded as

1987 8. Bias, 1986, oil and wax on canvas, 92 x 54 inches, from Row’s first one-person exhibition at John Good Gallery, with paintings loosely based on Brancusi’s Endless Column. That year, Row received a National Endowment for the Arts grant in painting.

beautiful only in so far as they are pure,” noting that, in this case, it is therefore “a determination which concerns their form.” Only colors that are single and pure enable, Kant says, “the formal determination of the unity of a manifold of sensations.” Concretely, it is hard to know what the philosopher had in mind as examples of pure color, or even what kinds of colors he would have accounted pure. Any spectral color? What about black or white? But in view of the history of monochrome painting from Malevich and Rodchenko to the present, it is fascinating that Kant saw pure color as the one instance in which color would become equivalent to form. And make no mistake, although Row’s most significant precursors also include several whose work did not really touch upon the monochrome (Al Held, most evidently) and he himself has rarely resorted to the monochrome after such very early works as Fortress, 1976 (page2)—still for all that, to see Row’s paintings without keeping in mind as their implicit background certain specifically New York avatars of monochrome painting would be to miss

1992 Invitational Exhibition of Painting and Sculpture at the American Academy and Institute of Arts and Letters included two of Row’s paintings. 13. Negative Monument, 1992, cast wax, 37 x 24 x16 inches, fabricated for a show at Ascan Crone in Hamburg.

half their point: Ad Reinhardt’s black paintings, Robert Ryman’s white ones or Ellsworth Kelly’s primary colors, the Frank Stella of the late 1950s and early ‘60s and the Brice Marden of the mid-‘60s through early ‘80s, Robert Mangold, Ted Stamm among others. Or am I permitted to say: It would be too miss half the fun? I’ll permit myself to say it. In fact, it’s necessary, because the great danger when it comes to an analytical approach to painting such as Row’s—and that of the tradition with which he has joined forces—would be to forget about visual and intellectual pleasure, the lightness and jubilation that are its main justification. Row’s feeling for color is grave, but his feeling for form is ebullient. But that’s an aside. I just wanted to remind you that (unlikely as this may seem) it’s possible to mention Kant while still having something lighthearted in mind. What all the painters I’ve mentioned—except perhaps Rodchenko—were aware of is that the monochrome, however pure, is never simple; it is always (to use Kant’s phrase in what may not be the same sense he used it) “a manifold of sensations.” Row’s proposition has

1995 15. Row’s Split Infinitive was included in Mark Rosenthal’s Critiques of Pure Abstraction catalog and travelling exhibition. 1996 16. Installation of Flatland at Locks Gallery, Philadelphia, which was also reproduced on the cover of Continuous Model: The Paintings of David Row, Edition Lintel, Verlog Robert Gessler, 1997).

been, simply—simply in the sense of “not so simply”—to dissect that manifold and recombine its parts, to find its tensions, its contradictions, even its arbitrariness, and yet also still find its unity. Row’s paintings are therefore not, I have to insist, made after the monochrome—no feeling of, “Well, what next now that that’s been accomplished?” here—but in a strange sense within the monochrome, only now one whose monochromy is understood as having always already been more rhetorical than actual. (By “rhetorical” I do not mean “verbal,” but rather, “persuasive.”) An early painting like Koloph I, 1986 (page 10), does not feature the clear division into segments typical of Row’s later work—whether through the use of multiple canvases or of hard-edged rectilinear divisions within a single support—yet it clearly declares its double game: The left and right halves of the painting could almost be overlaid to form either a black or a blue monochrome—but just almost because one side or the other would have be jogged up or down to make it work, as on the right, the shorter steps in the ladderlike pattern (reminiscent,

18. Wind Cools Itself, first shown at André Emmerich Gallery, New York, was later shown Galerie von Bartha, Basel, in 2010. 19. Row began working summers in his new studio in Maine, near where he was born. The house and studio were designed by his friend Richard Gluckman. 20. 1997 20. Roundtrip, 1997, oil and alkyd on aluminum panels, 72 x 248 inches, at the National Airport in Washington, DC.

as in many of Row’s works of this time, of Brancusi’s Endless Column) are lined up with the longer ones on the left, and vice versa. Still, the positive-negative duality within the work is held at a precise equilibrium so that the two sides grasp each other in an indissoluble unity that evokes the monochromy that is elided. Another instance of this positive-negative equilibrium— but top to bottom rather than side to side—can be found in Untitled Black, 1989 (pages 1213), in which the form is articulated by matte and gloss black: monochrome or not exactly? More than the sculptural Endless Column could ever do, unless it were built so tall it disappeared into the clouds, the pattern in a painting can imply indefinite reiteration simply by intersecting the edge of the canvas; availing itself of this possibility, Koloph I avoids making an issue of closure or fragmentation. By contrast, Row’s three-part paintings of the 1990s, in which the differently-sized canvases abut to create complicated, typically tensided configurations, always present themselves as concatenations of fragments, with their swooping arc-like forms always implying the possibility of completion at a larger scale so as

to form a letter O or, better, a numeral 0. The aptly titled Split Infinitive, 1990 (page 15), is a straight-faced trickster of a painting in which the three compositional zones do not accord with the three canvases that compose it. Like Koloph I, it is a two-color painting—but what complex, richly inflected colors!—that seems to desire above all the overcoming of its own compositional divisions, the attainment of single coloristic synthesis. Other works from the same decade include diptychs that do feature a completed 0 (zero) form, yet this “whole nothing”—if there can be such a thing—itself can appear to slide in and out, not just of focus, but of presence, as in Flatland, 1994 (page 17). In that painting we seem to see two adjacent monochromes, red and chartreuse, but once again, the layering of these near-complementaries implies an inner kinship—an elective affinity—rather than anything like a contrast. Here, opposites don’t just attract, they want to merge. In some of Row’s most impressive recent works, the flying arcs or fragments of ovals he has used for a quarter century take on new life by appearing in a different format: single,

irregularly shaped canvases such as Cartography, 2014 (page 23), with its six sides and angles, each side (if I am not mistaken) of a different length and therefore each angle. This is almost—another one of Row’s “almosts”—another two-color painting, blue and white, but again the painter is playing tricks, because of the red layered into the mix and seeming to outline parts of the painting, reinforcing its irregular form. In works such as Split Infinitive, the underlying questions was, “How do fragments come together to form a whole that is not the same as the whole or wholes they might once have been part of?” In Cartography, by contrast, where there is some residual sense that there might once have been a rectangle that has been carved away into a smaller but more complicated form, the question seems to be something more like, “How can so much be removed without losing the sense of the whole that might once have been?” In either case, the answer seems to have to do with a simple word for a complex phenomenon: desire. On further thought, never mind Kant. Reread Aristophanes’s speech in Plato’s Symposium. n