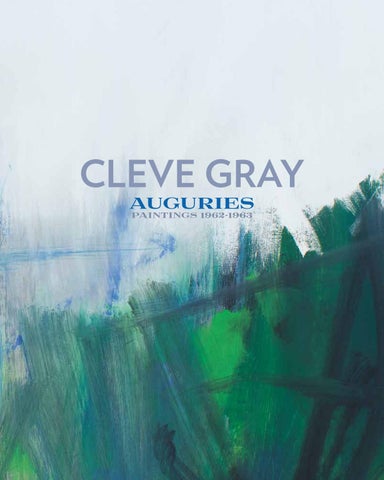 CLEVE GRAY: AUGURIES Like the most challenging stages of bicycle races, the resonant, mysterious abstractions of Cleve Gray are best described as hors categorie — unclassifiable. As soon as we think we have found commonalities among his work and that of his peers and near-contemporaries, we discover, instead, inconsistencies. We may note, for example, that, like the Abstract Expressionists, Gray constructed his most achieved paintings with ample, super-charged gestures that seem to be at once eloquent carriers of emotion and purely painterly ways of animating indeterminate space. But it is evident that Gray rejected the contingent, wet-into-wet, tonal approach of the Abstract Expressionists in favor of confrontations of relatively clear hues, which allies him with the Color Field painters. Yet to further complicate things, it is also plain that Gray never embraced the anonymous surfaces and disembodied facture of Color Field painting, preferring always to remind us of the presence of the artist’s hand with a brushy, calligraphic touch that brings us back to the aesthetic of the Abstract Expressionists — except for the fact that his bold gestures seem to be less declarations of psychological states than meditative, Zen-like manifestations. The closer we look, the more stubbornly distinctive and idiosyncratic Gray’s work appears to be. Knowing something of Gray’s history helps to explain some of these apparent anomalies. Born in New York City in 1918, he was at least a decade younger than most of the Abstract Expressionists and about ten years older than the Color Field painters. More important, although he was linked by friendship with artists from both generations, he had a very different formation than any of his American peers. While still a young student at Ethical Culture School, in New York, he began formal art training with a former pupil of George Bellows. Gray continued to study painting at Phillips Academy, Andover, Massachusetts, and later at Princeton University, where he also majored in art history, but his most important art education took place in France; during an extended stay, in the wake of World War II, he studied with André Lhote and Jacques Villon. Even Gray’s kind

of gestural abstraction was arrived at via a different path from that of his Abstract Expressionist precursors. Rather than springing from Surrealist ideas about generating or releasing marks that were the visible manifestations of the individual personality, his heroic flourishes had their origins in his deep knowledge of Asian art, which began when he was at Princeton and produced a thesis on Chinese landscape painting of the Yuan dynasty. Add to this mixture of European and Asian influences Gray’s wholly American sense of directness, ample space, and unconstrained scale, and it’s not surprising that his work resists categorization. What is undisputed, however, is that Gray’s paintings of the 1960s signal a significant shift in his direction, a clarification of approach that points ahead to his concerns over the next four decades of his long and productive life as a painter. These include a dedication to abstraction that also embraces rich, non-specific allusions; a celebration of the act of moving responsive paint across the surface of the canvas, so that we can mentally recapitulate the history of the work’s coming into being; and an exploration of the evocative qualities of color. The difference between Gray’s paintings of the 1960s and those that immediately preceded them is striking. While his 1960s works are still elegantly disciplined – “classical,” we might say — they are notably more sensuous and more insistently abstract than his earlier efforts; a wide range of chromatic hues and sinuous gestures dominates. The immediate trigger for these developments seems to have been trips to France, Italy, Greece and the Aegean. While Gray’s paintings of the 1960s are never overtly referential, they seem informed, however obliquely, by his responses not only to the art and architecture of the sites he visited, but also to particular qualities of light, weather, and landscape formations. It hardly needs saying that there is nothing literal about these responses. Yet while some of Gray’s confrontational gatherings of generous brushmarks in works from the early 1960s evoke land masses, foliage, or light on water, other, no less abstract

configurations from the mid-1960s have the presence and singularity of standing or reclining figures. Such associations are sometimes reinforced by titles or confirmed when we learn, for example, that some of the first iterations of the latter group were based on studies of the female figure, perhaps provoked by sculptures Gray saw on trips to Greece. But before we romanticize Gray’s motives too much, we should also remember in mind that both he and his wife, Francine du Plessix, were deeply involved with the antiVietnam War movement in the mid-1960s; one of his most intense canvases of 1963, Reverend Quan Duc, was conceived as a tribute to a Vietnamese priest who immolated himself in protest to the growing crisis in his country. Confronted by the painting’s energetic scrawl of loose black strokes that all but obliterate a zone of ethereal blue, we might, if not for the title, be tempted to read landscape or atmospheric references into the picture. In the end, Gray’s paintings of the 1960s, whatever the stimulus for him, whatever associations they suggest to the viewer, Reverend Quan Duc, 1963 Oil on canvas 60 x 50 inches

are about the seductive qualities of paint on canvas and the inherent expressiveness of the gesture that transfers that paint to that canvas — which is not to suggest that they are devoid of feeling or empty of that problematic concept, “meaning;” it’s simply that the emotion, like the “meaning,” is communicated by purely visual means. Whether we choose to concentrate on the history of the painting’s making manifest in Gray’s vigorous gestures or allow his open-ended allusions to provoke our own reveries, we can read his subtle, ambiguous images many different ways. That’s what keeps us looking.