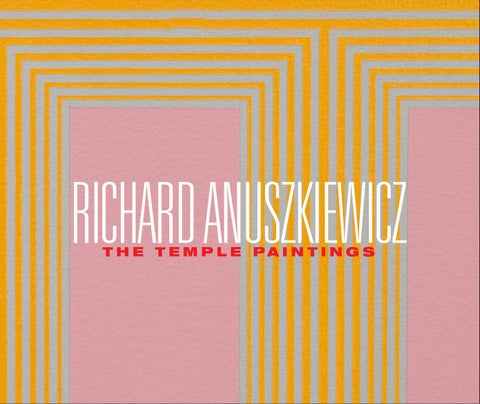 The first thing one notices about the paintings from Richard Anuszkiewicz’s “Temple Series” is the profound luminosity of these works. They appear to be lit as if from some inner source. And in an era that has become accustomed to art that employs both artificial and natural sources of light (think of Dan Flavin or James Turrell), it seems a striking accomplishment that the ageold medium of paint on canvas should offer up such radiant pleasures. No matter what their size—and the paintings in this series range from a relatively modest 18 by 24 inches to six feet tall—the “Temple” works also pack a powerful monumentality,

a byproduct in part of the architectonic framing of each set of vertical bars, surrounded by narrowly spaced parallel lines that give the illusion of being modeled in the round. The paintings, completed between about 1981 and 1984, were inspired by a trip to Egypt, specifically the Valley of the Kings, “when Egypt was still old Egypt,” as the artist has remarked. As is characteristic of virtually all of his works, there are no specific references, whether to ancient styles of building or other events and objects in the real world. Indeed the “fluting” of the framework seems to have more in common with Greek columns (significantly,

Hatshepsut’s temple, the focal point of the complex © Mirek Hejnicki

Anuszkiewicz recalls repairing a model of the Parthenon in the Junior Museum of the Metropolitan Museum of Art during one of his early jobs in New York). The colors can evoke a number of sources, from the well-preserved pigments of many ancient tombs to the neon glow of downtown Tokyo or Times Square. Now in his 80s, Anuszkiewicz experienced both the blessings and the curse of early fame soon after moving to New York in 1960. A small-town boy from Erie Pennsylvania, the son of Polish immigrants, the artist found his calling early on and rapidly developed a level of sophistication, first as an undergraduate at the Cleveland Institute of Art and later in graduate studies at Yale, where he had the good fortune to study with the legendary Josef Albers. The lessons of Albers would steer him on a course toward pure abstraction, grounded in the power of color. His first one-man show, at the age of 30 in 1960, garnered a largely positive review in The New York Times and a visit from Alfred Barr, director of the Museum of Modern Art, who bought paintings both for MoMA and for collector Nelson Rockefeller. Anuszkiewicz was part of the museum’s show “Americans 1963,” which led to a major article about him in Time magazine. Soon after, Sidney Janis—who along with Leo Castelli was one of the prime promoters of young talent in those years—became his dealer. And in 1965 two of his paintings were included in the Modern’s landmark show “The Responsive Eye,” the exhibition that launched the Op Art movement and 6

saddled Anuszkiewicz with a label that’s been in some ways useful for establishing his place in the pantheon of art history and in others has unfairly obscured his lasting achievements. In retrospect, Op Art seems almost absurdly emblematic of a decade marked by giddy highs (Woodstock, psychedelic drugs) and wrenching lows (Vietnam, the assassination of major leaders). MoMA’s sprawling show of 123 sculptures and paintings by 100 artists, organized by William Seitz, put the movement on the map (the catchy name, breezily rhyming with Pop Art, was coined a few months earlier by critic Brian O’Doherty in a Time article subtitled “Pictures that Attack the Eye”). But it included a grab bag of now forgotten artists, and though Seitz’s scholarly catalogue essay attempted to trace the movement’s origins in masters like Monet and Seurat, the best works

among the contemporary artists were, as art historian John Spike put it, “lost in a din of eye-chart tricks.” Nonetheless the sharper critics of the day took note of the two “Op masters” who would go on to long and lasting careers, namely Bridget Riley and Anuszkiewicz. Also lost in the cacophony that surrounded “The Responsive Eye,” which included a CBS special narrated by vetDonald Judd, Painted wood block, 1991 Art © Judd Foundation. Licensed by VAGA, New York, NY Courtesy of Gallery Yamaguchi, Osaka

eran newsman Mike Wallace, were parallels between Anuszkiewicz and some of the dominant trends and artists of the past 60 years. Like Frank Stella and Kenneth Noland, who were part of the MoMA show, Anuszkiewicz has always worked in series. Like Donald Judd, who was not included, he finds his roots more in the austere Precisionism of Charles Sheeler and Charles Demuth than in the Old World theorizing of Seurat or even Albers. No matter that they take their inspiration from ancient structures, the paintings of “Temple Series” are non the less quintessentially American, like Greek Revival architecture.

And within the boundaries Anuszkiewicz set for himself—vertical bars of color surrounded by a “pinstriped” framework, the whole encased in a narrow rectangular band—the range of effects achieved and emotions evoked is remarkable. The central colors can appear to blaze forth or recede into the distance; the narrow striations surrounding them curve and bend. And the choice of colors projects a mood that can veer from jazzily up-tempo, as in Temple of the Yellow Light, to mysterious and remote, as in Temple of Midnight Black. Some of the restless optical power of these paintings can be explained by pitting complementary colors against each other or within the same bounded space: green and red, blue and orange. But the rest, why the eye feels seduced and engaged rather than “attacked,” is pure magic. Taken as a whole, the paintings gathered here from the “Temple Series” offer a chance to reassess Anuszkiewicz’s accomplishments. Like all great work that depends in large measure on color for its impact—think of Matisse, for example—some of the freshness and intensity resides in the way the eye interacts with visual phenomena. And if we can forget about the largely useless label that was Op Art, we can see these works as resolutely classical, belonging to an era between the explosive innovations of Abstract Expressionism and the endless proliferations of post-modernism. n Ann Landi 7

Loretta Howard Gallery is pleased to present Richard Anuszkiewicz: The Temple Paintings. Composed between 1981 and 1984, these works were inspired by a trip the artist took to Egypt. While inspired by the geometries of sacred temples, these paintings do not make direct reference to individual structures but use the geometric framework as a space in which to experiment with juxtaposed complimentary colors. While Anuszkiewicz is known for his early involvement as an optical artist the subtle luminous depths of these paintings call fourth other associations- mainly the recurring geometric structures of Donald Judd and Frank Stella, the color theory of his mentor Josef Albers or the luminosity of a Dan Flavin.