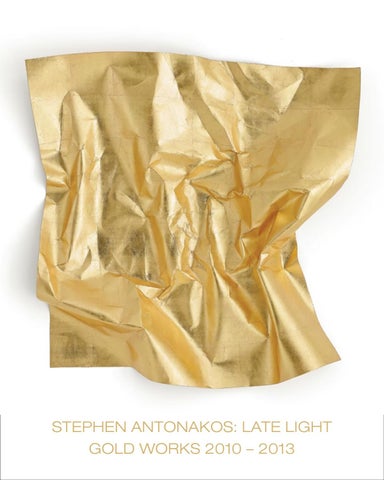 Stephen Antonakos has been the pioneer in the use of neon in fine art for 50 years. A major achievement has been his engagement with architectural form and space. Essentially a classist in the constructivist tradition, he has revealed the poetry of neon.

STEPHEN ANTONAKOS: LATE LIGHT The essence of Stephen Antonakos’s art is time, space, and light; his lifelong concern is the ever-changing relationship between these elements. Antonakos’s art is performative. It actively involves the viewer sensually, intellectually, and emotionally in unfolding experiences. While the geometric structure of the artist’s work is straightforward and direct, the aura created by surrounding fields of light is never static. To observe Antonakos’s Neon Panels in natural light over the course of a day is a revelatory experience. At mid-day, the gold and metal leaf of their surfaces is strong and declarative, and the surrounding field of light is delicate and elusive. As evening falls, the panels themselves seem to darken, absorbing rather than reflecting light. The adjoining atmosphere of light increases in intensity, complexity of color interactions, and expansiveness. The measurements of the Panels themselves may seem to change as they grow to fill both the viewer’s visual field and their architectural environment. The paired installation here of two late works, “Saints Cosmas and Damian” and “Archangels Michael and Gabriel” may be viewed as a formal dialogue. Antonakos began the Neon Panels in the late 1980s, and they remained a major practice of his art to the very end. They are the fourth exploration of works made for interior walls by this sculptor for whom the activation of space was central. First were the Direct Neons, linear complete and incomplete geometric forms installed directly into existing architectural situations. Begun in the early 1970s, these were exhibited in many galleries and museums, particularly in Europe, through the decade and beyond. The second, simultaneous, works were the large-scale painted Walls with complete and incomplete geometric neon forms flat on their surfaces. These also continued into the new millennium. The third, his unstretched Neon Canvases with neon tubes cutting through and extending across and usually beyond their active painted surfaces, remained a distinct, intense practice through the mid-1980s. The fourth, the Neon Panels, are the most sculptural of the four kinds.

Their geometric forms are substantial and they sit out from the wall a few inches, so the colored light of the neon tubes behind their edges spreads softly out along the wall — and, in the dim light of evening, out into the space of the room. Through the decades, they appear as single geometric shapes or as compositions of rectangles, with surfaces painted white or another solid color or else metal-leafed. Paradoxically, the solid Neon Panels can feel almost ephemeral: seeming to hover off the wall as if suspended in colored space. In the context of modernism, Antonakos shared with his minimalist colleagues an interest formalism and a profound understanding of the visual power of simplified geometric structures. But, while some embraced materiality for its own sake, Antonakos transformed his materials into felt experiences. In doing so, he reached back to modern artists with similar sensibilities. Among those artists is Malevich who described his suprematist compositions as “the supremacy of . . . feeling in . . . art.” The moral imperative of Piet Mondrian’s expansive grids moved Antonakos as did Mark Rothko’s belief in the elusive and sublime character of color. The present exhibition also features Antonakos’s gold leaf drawings begun in 2011, both his flatcut Continuations and the crumpled Terrains. Throughout his career, Antonakos had made drawings with cuts, creases, and crumples. The Terrains reveal both the sensitivity of Antonakos’s touch and his willingness to accept a degree of fortuitous accident that resulted from his interaction with the material. Like the Neon Panels, the Terrains and Continuations highlight the artist’s extreme receptivity to gold as a carrier of light. The color, luster, brightness, opacity, and translucency of gold in these works change dramati-

Kazimir Malevich, Painterly Realism of a Boy with a knapsack - Color Masses in the Fourth Dimension, 1915, Oil on canvas, 28 x 17 1/2 inches, Digital Image © The Museum of Modern Art/Licensed by SCALA / Art Resource, NY

cally depending on the lighting conditions and viewer positions. Also, like the Neon Panels, the Terrains are three-dimensional objects but seemingly have no mass. Within their box frames, they float like clouds in the sky. This exhibition also highlights one of Antonakos’s Meditation Chapels. The artist’s creation of singular architectural constructions originated with his outdoor installation The Room of 1973. Many Neon Rooms, Chapels, and Meditation Spaces were constructed full scale outdoors and inside museums and galleries throughout the decades. Others exist only as small models or as drawings. Some, if realized, would could be consecrated, others are formal, geometric architectural proposals. They all share an unerring sense of scale and a source in his experience of the light and space of the small chapel in the Peliponnesian village of his earliest years. The untitled Chapel model in this exhibition is radical in the simplification and directness of its design. The structure is a wedge formed by right-angle triangles. One enters the Chapel at the foot of the triangle on the west side, and the angular architectural space soars above. The southern vertical wall consists of frosted glass with three clear panes. The sloping roof, the hypotenuse of the triangle, contains a single pane of red glass. As the sun passes overhead, the red light projected on the floor moves during the course of the day from west to east, tracing time. As in all of Antonakos’s art, this Chapel embodies the artist’s unique understanding of the expressive power of space, light, and movement, all within the context of a rigorous contemporary sensibility.

NOTES ON THE ARTIST Antonakos has suggested that his earliest influences were the natural light in the tiny Greek village where he was born and the harmony he experienced inside the even tinier chapel there. After WWII he established his first studio in Manhattan’s fur and garment district. Here, working with Assemblages of found objects offered up by city streets was an economic necessity and a natural choice that aligned with modernism’s trope toward including things from the real world. Through the Fifties, these careful, colorful compositions often included box-like forms — small architectures. Around the end of the decade, it was the city’s streets that, again, had the answer: neon (a material we might think of as “found”). Once discovered, Antonakos redefined this medium as “real things in real spaces in the here and now” in unique abstract geometries whose placements were definitive. Words, images, metaphors, and references of any kind were gone. “For me neon is not aggressive, but it has certain powers. It can be seen from great distances and it can be used not just linearly but spatially.... I simply thought that so much more could be done with it abstractly than with words and images. I had a feeling it could connect with people in real, immediate, kinetic and spatial ways.” By the mid-Sixties, his sculptural installations at the Fischbach Gallery made it clear that a work’s scale is not merely the measurement of its tubes, but the volume of space it creates in relation to the architecture. Being present in the space that holds the art allows the viewer an experience both visual and kinetic, in time. Antonakos’s work addresses the viewer. For him, a work came into existence only when it reached what he called the inner person. His double Greek/American culture preserved the strength of his powerful early impressions and also opened the windows wide to a New York art world of exciting individuality and freedom. With his neon work and in his many other directions through the decades, his gentle rigor and his spatial innovations are all present in geometric forms. He said, “The square, the angle, the arc, the line — they last forever.”

Throughout, the placement of forms in space remained the central dynamic. Within each work, he positioned elements to relate to each other, to the composition as a whole, and to the site. With most of the framed works one senses not images, but objects. Spatial decisions there involved not only what was behind the glass, but the rhythmic, off-beat arrangements of serial works on the wall. None of this was arrived at through intellect or systems, but discovered through the physical process of creation. He was extremely sensitive to the moment when making the cuts and crumples of the late Gold Works. Each move was a new act of trust, in and for itself. As he said, “The hand leads the mind.” And, “It is important to know when to stop.”

Stephen Antonakos in the studio, 1990

Antonakos (Greece, 1926 — NYC, 2013) came to New York with his family in 1930. He drew constantly as a young person. After serving in WWII, he produced his Assemblages and Sewlages incorporating found objects. These were exhibited in such galleries as Martha Jackson and Charles Byron. From the mid-60s on, his site specific neon sculptures and installations were shown often at the Fischbach and John Weber Galleries, and increasingly across the US and in major cities throughout Europe and in Japan. The work spans the 3-D floor sculptures, the linear geometric architectural installations called Direct Neons, Neon Walls, Neon Canvases, Neon Panels, Neon Rooms, Chapels and Meditation Spaces, and the Public Works. There is also an extensive body of work including drawings of many materials, the conceptual Packages begun in the 70s, collages, Travel Collages, prints, Artist’s Books, and the late Gold Works. His work is held in numerous public and private collections here and abroad. He has made new work for hundreds of exhibitions and installations worldwide, including “10 Outdoor Neons,” Fort Worth Art Museum, 1974; “Works in Spaces,” San Francisco Museum of Art, 1974; documenta 6, Kassel, 1977; “Electra,” Museum of Modern Art of the City of Paris, 1983-86; “Chapel of the Saints,” Fortress of St. George, Rhodes, 1993; XLVII Venice Biennale, 1997; “Artec” International Biennale, Nagoya, Japan, 1997; “Inner Light” Smith College Museum of Art, 1997; “Proscenium,” Neuberger Museum of Art, 2000 and 2018; “Silent Chapel,” Onassis Cultural Center, New York, 2003; “Antonakos: A Retrospective,” Benaki Museum, Pireos, Athens, 2007-08 and Allentown Art Museum, 2009; “The Search,” Aeschyleia Festival, Elefsina, 2011; and “Remembrance,” National Museum of Contemporary Art at documenta 14, Kassel, 2017. Antonakos installed over 50 permanent Public Works in the US, Europe, and Japan and received lifetime achievement awards from the Neuberger Museum, SUNY Purchase in 2000; the National Academy of Art, NY, in 2011; and the Greek America Foundation, Chicago, in 2011.