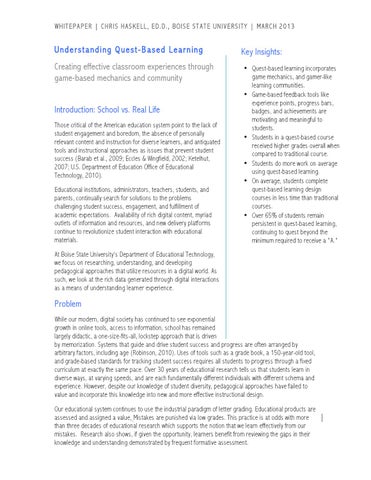 At Boise State University’s Department of Educational Technology, we focus on researching, understanding, and developing pedagogical approaches that utilize resources in a digital world. As such, we look at the rich data generated through digital interactions as a means of understanding learner experience.

Problem While our modern, digital society has continued to see exponential growth in online tools, access to information, school has remained largely didactic, a one-size-fits-all, lockstep approach that is driven by memorization. Systems that guide and drive student success and progress are often arranged by arbitrary factors, including age (Robinson, 2010). Uses of tools such as a grade book, a 150-year-old tool, and grade-based standards for tracking student success requires all students to progress through a fixed curriculum at exactly the same pace. Over 30 years of educational research tells us that students learn in diverse ways, at varying speeds, and are each fundamentally different individuals with different schema and experience. However, despite our knowledge of student diversity, pedagogical approaches have failed to value and incorporate this knowledge into new and more effective instructional design. Our educational system continues to use the industrial paradigm of letter grading. Educational products are assessed and assigned a value, Mistakes are punished via low grades. This practice is at odds with more than three decades of educational research which supports the notion that we learn effectively from our mistakes. Research also shows, if given the opportunity, learners benefit from reviewing the gaps in their knowledge and understanding demonstrated by frequent formative assessment.

2 WHITEPAPER | CHRIS HASKELL, ED.D., BOISE STATE UNIVERSITY Individuals in our modern, digital society interact with tools that offer more affective forms of interaction and feedback. Digital games and social networks allow for a personal, self-paced, and adaptive experience. It is this personally relevant and rewarding experience that makes these tools so popular and ubiquitous. Video games are played by 98% of youth and 93% of adults. Digital games, for example, offer experiences that are vastly different from traditional educational experiences despite the amount of learning that takes place (Gee, 2011). Games frequently offer multiple pathways, personalized rather than comparative progress tracking, recognition of progress and success through badges and achievements, and allow participants to fail without lasting punishment. Also, feedback in gaming environments is instantaneous. These elements contribute to the attractiveness of games. In Figure 1, we see how these attributes can be overlayed on the education process by comparing a traditional, linear grade-book based learning to a non-traditional, non-linear quest-based learning approach.

Solution Quest-based learning is an instructional design theory that leverages game mechanics and gamer-like learning communities to support student choice within the curriculum, and offers promising pedagogical possibilities in the area. In both video game and quest-based learning architectures, quests are goal oriented (or task-oriented) searches for something of value that regulate or guide a player/learner through the narrative of the game/course (Charsky, 2010; Howard, 2008; Sullivan, Mateas, &amp; Wardrip-Fruin, 2009). “Quests involve a series of trials, puzzles, and tasks (such as locating secret chambers and obtaining hidden information) that the participant must conquer for their character to advance to the next game level” (Lange, 2010, p. 27).

WHITEPAPER | CHRIS HASKELL, ED.D., BOISE STATE UNIVERSITY | MARCH 2013 Quest-based learning design focuses on an individualized and flexible curricular experience. In QBL, students can select activities, called quests, rather than assignments in a fixed linear order. Students leverage choice to promote engagement rather than waiting for a due date. Like curricular assignments, quests can contain any combination of text, media, or experience and culminate with a deliverable like a paper, speech, video, project, or other practical artifact. Since quests are digitally tied to specific standards and/or competencies, digital systems supporting quest-based learning record that progress when completed. Traditional course content taught through quest-based learning can offer multiple pathways that lead to an equivalent educational outcome. Teachers in a quest-based approach do not assign letter grades to completed quests. Dismissing the industrial paradigm approach in favor of a digital age sensibility, teachers either approve a quest because it meets all expectations or return the quest to the student for revisions and resubmission. Just like video games, quest-based learning supports multiple attempts without punishment to promote learning from mistakes. Successfully completed quests earn experience points (XP). Like videogames, XP contributes to progression through levels and ranks, as a prerequisite for other curriculum, demonstrates progress across standards and competencies, and accumulates toward course completion or “winning condition.” Like digital games, quest-based learning promotes the use of badges, achievements, and awards to mark student progress, recognize specialization, and provide multiple forms of formative feedback and evaluation. Teachers in a quest-based approach can designate specific badges to represent important or required elements of the curriculum. Tools that deliver quest-based learning also provide students with progress bars. Using XP, progress bars can show progress toward the winning condition, the next rank or level, or even individual standards or competencies.

Research In 2010, professors at Boise State University Dr. Lisa Dawley and Dr. Chris Haskell built a game-based learning management platform to begin testing the quest-based learning approach. Their tool, 3D Game Lab, was employed in just a handful of college and middle school classes initially. Since that time, the tool has been made available to over 500 “beta-teachers” and thousands of their Figure 2. Demographics of quest-­‐based learning in 3D GameLab. students in over 10 countries. As a webbased learning management platform, 3D GameLab collects thousands of points of data for each user including click data from interactions. Through data mining, this data has been used to describe the experience, interactions, and outcomes of questbased learning (see Figure 2 for summary data). In a key study of student success in a pre-service teacher course, I began using the tool as the primary learning management interface in my EDTECH-202 course in the fall of 2010. I took a curriculum that had largely been built in modules, and converted those readings, videos, and activities into quests. Students had the opportunity to choose activities they were interested in rather than have that decided for them.

Higher grades achieved overall. Preservice teacher candidates engaged in a digital age teaching skills curriculum are shown to be highly successful using the quest-based learning approach (Haskell, 2012). 93% of students (N=97) using this approach reached the winning condition, described as receiving a course grade of “A”. The remainder of students either received an F for failing to attend or an incomplete (I), later completing the course. In this approach, average completion time was reduced from 16 weeks to 12 ½ weeks with one student completing in just four weeks. Students reported the lack of due dates and freedom to progress in the curriculum as motivating factors. Figure 3 illustrates the variety of rewards earned during the course, the average number of completed quests (37.1), and the average user rating of quests (4.45 on a 1-5 likert scale).

Persistence in questing and completing more work on average. Despite being able to walk away from the class once they had completed the requirements (2000 experience points + a completed portfolio), students continued playing through the curriculum, demonstrating persistence in learning. Figure 4 below shows student activity, and XP, relative to the winning condition (white line). Not only did the vast majority of students reach the winning condition, many exceeded expectations. As a group, the class averaged nearly twice as many completed activities as previous, module-based iterations of the course.

Conclusion Students engaged in quest based learning benefit from choice in curricular interactions. They are more motivated to engage in classwork, complete nearly twice as much of it, have success meeting more of the class standards and expectations. Once finished with required classwork, many students in the quest-based approach continue to play through the curriculum. It is a promising approach for digital age teaching and learning, as well as a potential long term solution for student engagement and success. Continued research at Boise State and Gogo Labs will continue to improve our understanding of QBL.