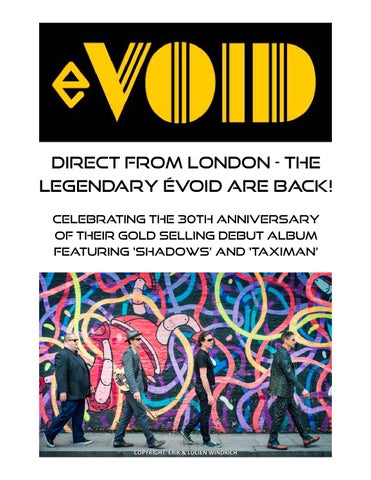 DIRECT FROM LONDON - THE LEGENDARY ÉVOID ARE BACK! CELEBRATING THE 30TH ANNIVERSARY OF THEIR GOLD SELLING DEBUT ALBUM FEATURING ‘SHADOWS’ AND ‘TAXIMAN’

The organisers - Des Buys, Themi Cooras and Cheryl Minkley - would like to thank everyone who has been involved in this venture. Thank you, East London, for showing that we have the spirit to support a show of this nature and that our town should be on the itineraries of international touring bands - watch this space for our next big gig.

As an original Otis D member, hereâ&amp;#x20AC;&amp;#x2122;s wishing the band all the best for an unforgettable, historic gig.

éVOID 30 YEAR REUNION TOUR éVOID is a pop/rock outfit from Johannesburg, South Africa, now resident in London, and best known for their hits “Shadows” (1983) and “Taximan” (1984). In 1984, their debut album, simply called éVOID, went to no.1 in the Springbok Charts, reaching gold status that same year. Follow up albums include “Here comes the Rot” (1986) and “Graffitti Lounge” (2008). In August 2014, éVOID embarked on their first ever reunion tour in South Africa. History Void (without the ‘e’) was formed in 1977 on the East Rand. They won the local Battle of the Bands in 1978 and were offered their first professional gig in Zimbabwe a year later. The group then consisted of Lucien Windrich (guitar and vocals), Erik Windrich (keyboards and lead vocals), Danny de Wet (drums) and Terry Andalis (bass). During an eight month stint there the band recorded a cover version of the Knack’s current hit “My Sharona”. The B-side “Magicia” took off and reached number 4 on the Zimbabwean charts. In 1981 the band, playing largely covers, completed a stint at the Clarendon Hotel, Port Elizabeth. Erik and Lucien were getting restless (creatively), and Terry Andalis (bass) and Aggie D’Aguire (vocals) wanted to move on. So Lucien, Erik and Danny De Wet (drums) decided to continue as a three piece, as their agency had already booked their next contract (at the Holiday Inn, East London.) After a few weeks rehearsal, Erik and Lucien woke up to the news that Danny had also decided to move on, so they had to find a drummer quickly - George Voros answered the call and Void moved on to East London. This was a crucial step in the development of éVOID as we know the band today - by name, sound and visual vibe. Because the East London crowd were so supportive of Erik and Lucien’s experimentation with sound and imagery, it became a formative experience for them as they explored their musical roots. East London was the training ground that prepared them for their onslaught on Johannesburg - Dawson’s Hotel, the Chelsea Hotel - and onto the legendary debut album - éVOID. At this time, éVOID upped their image with painted faces, dances and South African jive rhythms. In 1983 with the new drummer Wayne Harker éVOID began to produce their most memorable and exhilarating live shows, and enjoyed a ground breaking and highly successful Varsity tour of the country. Their first single “Shadows” peaked at number 3 on the national charts and remains a staple on South African rock and pop oriented radio stations. In Feb 1984 they released the catchy “Taximan” which got to number 6 on the charts.

Later that year, the self-deprecating “I am Fadget” became the band’s third single, consolidating their white African punk inspired sound and striking New Romantic ‘boy band’ image. By September 1984 their first album was riding high at the top of the charts, followed by the release of a 12 inch maxi single, “Kwela Walk”, which received rave reviews. On Saturday 12 January 1985, éVOID, along with many other top South African bands, performed before an estimated 100,000 people at the Concert in the Park, in support of Operation Hunger. A month later, the brothers Karl, Lucien and Erik left South African for London where they performed as a four piece with Ilne Hofmeyer on bass and Richard Devey on drums. A second album “Here comes the Rot” was released in 1986 from which WEA released the single “Dance the Instinct”. In 1993, the group recorded a third album called “éVOID - Over the Years” available only on cassette for limited distribution. In 2008, after a lengthy hiatus, the Windrich brothers and original éVOID drummer George Voros released another èVOID album, “Graffitti Lounge”. Reviewing the CD, Johannesburg newspaper The Citizen wrote: “The songwriting power is still very much in evidence, and what could have been a tricky career stumble is, without doubt, a triumph.” Lucien and Erik still live in London with their families. Erik is currently employed as Creative &amp; Performance Manager at Kingsbury High School in London. Since graduating from the prestigious National Film &amp; Television School specialising in film music in 2000, Erik has scored two feature length films “Wanted” and “Fighting Spirit” and provided music for BBC’s Arena documentary of comedian Ken Dodd. Erik has also released tow solo albums “The Vision Thing” (2001) and “Backyard Discovery” (2003) on his own label Tantrum Records. Lucien is currently doing astrological research and sings and plays guitar in the Redemption Blues Band. In 2006, Lucien co-produced Wonderboom’s last album “City of Gold” which includes the songs “Brian” and “Loose End”, written for the band. Wayne Harker moved to Germany many years ago where he continues to be involved in music. Thirty years on, encouraged by the boundless energy and enthusiasm of long-time friend and ex-drummer Danny de Wet, éVOID are coming back to South Africa in August 2014 for a two-week reunion tour at the Barnyard Theatres in Joburg, Pretoria, Cape Town and Durban, and at the Old Selbornian Club in East London. Lucien and Erik will be joined on stage by Yoyo Buys (bass) and Mike Horne (drums). éVOID lives on.

Otis D is an original East London band, well-known in the 80s for their hard rocking evenings at the Bonza Bay Hotelâ&amp;#x20AC;&amp;#x2122;s Hob Nob, where they played their first gig in 1987. The driving force behind the band was Themi Cooras, who, after a six month stay in Cape Town, arrived back in town inspired and determined to get a band together. The band began with Michael Baker playing sax and guitar, and Darrin Varnfield as front man on vocals. After being without a bass player for a time, James Mallinson was recruited. The name Otis D was taken from the make of a drum machine which the band used until Titch Wild (ex-Moby Dick) joined them as drummer. Apparently, when Otis D got together, there was only one other live band in East London, which was busy recording and didnâ&amp;#x20AC;&amp;#x2122;t have time to play to local audiences. Otis D soon put this right, and before long was supporting the likes of Yvonne Chaka Chaka, Bright Blue, Marcalex, Mango Groove, and Mahlathini and the Mahotella Queens, and playing to a packed auditorium at the Grahamstown Monument Theatre. Otis D disbanded in the early 90s, and was replaced by The Elevators. It seemed apt for an 80s band to open the bill for Ă¨VOID - and the band has relished reuniting for this special show.

ALSO NOW ON THE EAST COAST