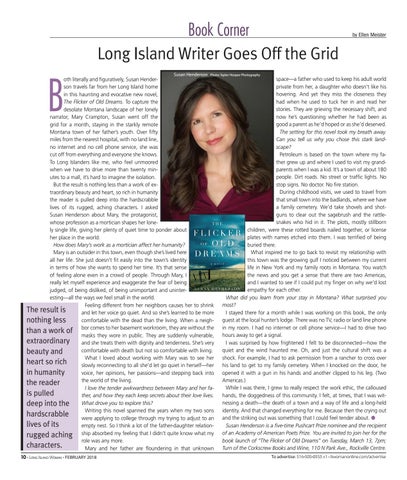 oth literally and figuratively, Susan Henderson travels far from her Long Island home in this haunting and evocative new novel, The Flicker of Old Dreams. To capture the desolate Montana landscape of her lonely narrator, Mary Crampton, Susan went off the grid for a month, staying in the starkly remote Montana town of her father’s youth. Over fifty miles from the nearest hospital, with no land line, no internet and no cell phone service, she was cut off from everything and everyone she knows. To Long Islanders like me, who feel unmoored when we have to drive more than twenty minutes to a mall, it’s hard to imagine the isolation. But the result is nothing less than a work of extraordinary beauty and heart, so rich in humanity the reader is pulled deep into the hardscrabble lives of its rugged, aching characters. I asked Susan Henderson about Mary, the protagonist, whose profession as a mortician shapes her lonely single life, giving her plenty of quiet time to ponder about her place in the world. How does Mary’s work as a mortician affect her humanity? Mary is an outsider in this town, even though she’s lived here all her life. She just doesn’t fit easily into the town’s identity in terms of how she wants to spend her time. It’s that sense of feeling alone even in a crowd of people. Through Mary, I really let myself experience and exaggerate the fear of being judged, of being disliked, of being unimportant and uninteresting—all the ways we feel small in the world. Feeling different from her neighbors causes her to shrink The result is and let her voice go quiet. And so she’s learned to be more comfortable with the dead than the living. When a neighnothing less than a work of bor comes to her basement workroom, they are without the masks they wore in public. They are suddenly vulnerable, extraordinary and she treats them with dignity and tenderness. She’s very comfortable with death but not so comfortable with living. beauty and What I loved about working with Mary was to see her heart so rich slowly reconnecting to all she’d let go quiet in herself—her in humanity voice, her opinions, her passions—and stepping back into the world of the living. the reader I love the tender awkwardness between Mary and her fais pulled ther, and how they each keep secrets about their love lives. deep into the What drove you to explore this? Writing this novel spanned the years when my two sons hardscrabble were applying to college through my trying to adjust to an lives of its empty nest. So I think a lot of the father-daughter relationrugged aching ship absorbed my feeling that I didn’t quite know what my role was any more. characters. Mary and her father are floundering in that unknown 10 • Long Island Woman • February 2018

space—a father who used to keep his adult world private from her, a daughter who doesn’t like his hovering. And yet they miss the closeness they had when he used to tuck her in and read her stories. They are grieving the necessary shift, and now he’s questioning whether he had been as good a parent as he’d hoped or as she’d deserved. The setting for this novel took my breath away. Can you tell us why you chose this stark landscape? Petroleum is based on the town where my father grew up and where I used to visit my grandparents when I was a kid. It’s a town of about 180 people. Dirt roads. No street or traffic lights. No stop signs. No doctor. No fire station. During childhood visits, we used to travel from that small town into the badlands, where we have a family cemetery. We’d take shovels and shotguns to clear out the sagebrush and the rattlesnakes who hid in it. The plots, mostly stillborn children, were these rotted boards nailed together, or license plates with names etched into them. I was terrified of being buried there. What inspired me to go back to revisit my relationship with this town was the growing gulf I noticed between my current life in New York and my family roots in Montana. You watch the news and you get a sense that there are two Americas, and I wanted to see if I could put my finger on why we’d lost empathy for each other. What did you learn from your stay in Montana? What surprised you most? I stayed there for a month while I was working on this book, the only guest at the local hunter’s lodge. There was no TV, radio or land line phone in my room. I had no internet or cell phone service—I had to drive two hours away to get a signal. I was surprised by how frightened I felt to be disconnected—how the quiet and the wind haunted me. Oh, and just the cultural shift was a shock. For example, I had to ask permission from a rancher to cross over his land to get to my family cemetery. When I knocked on the door, he opened it with a gun in his hands and another clipped to his leg. (Two Americas.) While I was there, I grew to really respect the work ethic, the calloused hands, the doggedness of this community. I felt, at times, that I was witnessing a death—the death of a town and a way of life and a long-held identity. And that changed everything for me. Because then the crying out and the striking out was something that I could feel tender about. l Susan Henderson is a five-time Pushcart Prize nominee and the recipient of an Academy of American Poets Prize. You are invited to join her for the book launch of “The Flicker of Old Dreams” on Tuesday, March 13, 7pm; Turn of the Corkscrew Books and Wine, 110 N Park Ave., Rockville Centre. To advertise: 516-505-0555 x1 • liwomanonline.com/advertise 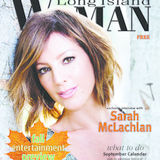