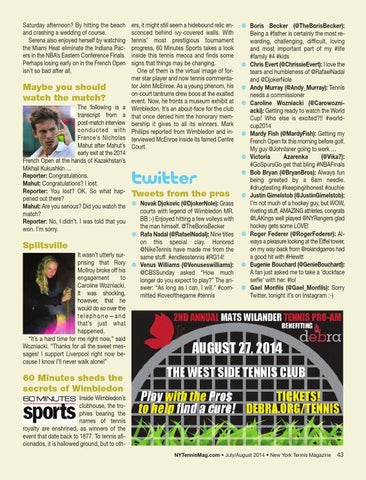 Saturday afternoon? By hitting the beach and crashing a wedding of course. Serena also enjoyed herself by watching the Miami Heat eliminate the Indiana Pacers in the NBA’s Eastern Conference Finals. Perhaps losing early on in the French Open isn’t so bad after all.

Maybe you should watch the match?

ers, it might still seem a hidebound relic ensconced behind ivy-covered walls. With tennis’ most prestigious tournament progress, 60 Minutes Sports takes a look inside this tennis mecca and finds some signs that things may be changing. One of them is the virtual image of former star player and now tennis commentator John McEnroe. As a young phenom, his on-court tantrums drew boos at the exalted event. Now, he fronts a museum exhibit at Wimbledon. It’s an about-face for the club that once denied him the honorary membership it gives to all its winners. Mark Phillips reported from Wimbledon and interviewed McEnroe inside its famed Centre Court.

The following is a transcript from a post-match interview conducted with France’s Nicholas Mahut after Mahut’s early exit at the 2014 French Open at the hands of Kazakhstan’s Mikhail Kukushkin … Reporter: Congratulations. Mahut: Congratulations? I lost. Reporter: You lost? OK. So what hapTweets from the pros pened out there? Mahut: Are you serious? Did you watch the l Novak Djokovic (@DjokerNole): Grass courts with legend of Wimbledon MR. match? BB :-) Enjoyed hitting a few volleys with Reporter: No, I didn’t. I was told that you the man himself. @TheBorisBecker won. I’m sorry. l Rafa Nadal (@RafaelNadal): Nine titles on this special clay. Honored Splitsville @NikeTennis have made me from the It wasn’t utterly sursame stuff. #endlesstennis #RG14! prising that Rory l Venus Williams (@Venuseswilliams): McIlroy broke off his @CBSSunday asked “How much engagement to longer do you expect to play?” The anCaroline Wozniacki. swer: “As long as I can, I will.” #comIt was shocking, mitted #loveofthegame #tennis however, that he would do so over the telephone—and that’s just what happened. “It’s a hard time for me right now,” said Wozniacki. “Thanks for all the sweet messages! I support Liverpool right now because I know I’ll never walk alone!”

l Boris Becker (@TheBorisBecker): Being a #father is certainly the most rewarding, challenging, difficult, loving and most important part of my #life #family #4 #kids l Chris Evert (@ChrissieEvert): I love the tears and humbleness of @RafaelNadal and @DjokerNole l Andy Murray (@Andy_Murray): Tennis needs a commissioner l Caroline Wozniacki (@Carowozniacki): Getting ready to watch the World Cup! Who else is excited?!! #worldcup2014 l Mardy Fish (@MardyFish): Getting my French Open fix this morning before golf. My guy @JohnIsner going to work … l Victoria Azarenka (@Vika7): #GoSpursGo get that bling #NBAFinals l Bob Bryan (@BryanBros): Always fun being greeted by a 6am needle. #drugtesting #keepingithonest #ouchie l Justin Gimelstob (@JustinGimelstob): I’m not much of a hockey guy, but WOW, riveting stuff, AMAZING athletes, congrats @LAKings well played @NYRangers glad hockey gets some LOVE! l Roger Federer (@RogerFederer): Always a pleasure looking at the Eiffel tower, on my way back from @rolandgarros had a good hit with #Hewitt l Eugenie Bouchard (@GenieBouchard): A fan just asked me to take a ‘duckface selfie’ with her. #lol l Gael Monfils (@Gael_Monfils): Sorry Twitter, tonight it’s on Instagram :-)

60 Minutes sheds the secrets of Wimbledon Inside Wimbledon’s clubhouse, the trophies bearing the names of tennis royalty are enshrined, as winners of the event that date back to 1877. To tennis aficionados, it is hallowed ground, but to othNYTennisMag.com • July/August 2014 • New York Tennis Magazine