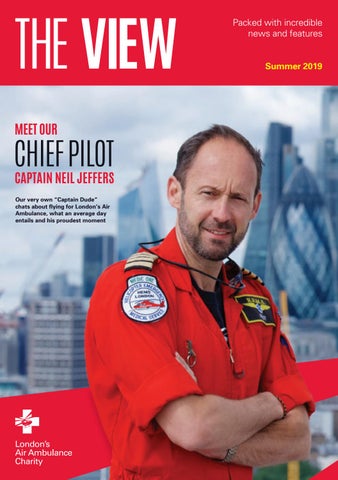 CHIEF PILOT CAPTAIN NEIL JEFFERS Our very own “Captain Dude” chats about flying for London’s Air Ambulance, what an average day entails and his proudest moment

IN THIS ISSUE… Latest News

The View From The Skies

IT’S COMING HOME In May, a new and exciting partnership was launched when London’s Air Ambulance flew the Cricket World Cup Trophy from The Royal London Hospital to the iconic Kia Oval, home of Surrey County Cricket Club (CCC), as part of the Cricket World Cup Trophy Tour. Jon Surtees, Head of Community at The Oval said: “London’s Air Ambulance has been a vital resource for the capital for the last 30 years and we’re delighted to be able to support their anniversary celebrations. “With the Cricket World Cup, the Ashes and Surrey CCC’s County Championship defence, 2019 is also a massive year for The Oval and to have the trophy flown into our ground by one of London’s most iconic services is a very exciting start!”

A RIGHT ROYAL REGATTA We are delighted to have been chosen by our 30th Anniversary Patron, HRH The Duke of Cambridge, as one of the beneficiaries of The King’s Cup, an inaugural sailing regatta taking place this summer in Cowes, on the Isle of Wight. Each boat taking part represents one of the charities being supported by Their Royal Highnesses this year. We are grateful and proud that London’s Air Ambulance Charity will benefit from the awareness and funds raised by this event, and are very much looking forward to taking part in this fantastic race.

TAKING TO THE AIRWAVES Keep your eyes peeled when watching TV, as London’s Air Ambulance Charity unveils its brand new TV campaign, “Every Second Counts.” Although 80% of Londoners know about our service, around two thirds of people are not aware that we are a charity. Our new campaign will spread the word and raise much needed donations to keep the service running. You can see the ad on ITV, Channel 4 and London Live.

PICKING UP THE PIECES

As a supporter of London’s Air Ambulance Charity, you know that your support saves lives. Now you can hear what happens next, through our “Picking Up The Pieces” podcasts. Hosted by Myleene Klass, the series is free to download, with each episode featuring a different patient’s story. Thought provoking, moving, inspirational and above all human, these are not to be missed. Download yours from iTunes, Spotify or wherever you download your podcasts from.

If you have a thirst for adventure and a head for heights, why not challenge yourself this September, by taking part in our annual Helipad Abseil. Take in London’s most spectacular view before making your thrilling descent from Europe’s highest helipad, whilst raising vital funds for London’s Air Ambulance Charity. To find out more or to book your place to conquer London’s scariest challenge, email events@londonsairambulance. org.uk or visit londonsairambulance.org.uk/ events

Captain Neil Jeffers gave The View a unique insight into his role as London’s Air Ambulance’s Chief Pilot I’ve been flying with the charity for 12 years and I’ve been lucky and privileged enough to have the role of Chief Pilot for the last 4 years. It’s amazing to me how many people are involved in treating a single person. From the police to the London Ambulance Service, our medics, pilots and fire-crew and other ops staff, our charity staff, and of course everyone that supports and funds us. Everyone has a crucial role to play in saving a life. A different day, every day One of the other incredible things about what we do is that 04

no day is the same. For example, I could be sitting here chatting and within 10 minutes be somewhere else on the ground next to a patient, helping people during the worst time of their lives. That’s why the days that stand out are the ones where you’re super busy. When I was a recently qualified captain, there was a day where I didn’t get out of the aircraft. We had 9 jobs with 2 medical teams on the ground, everyone working flat out, helping as many people as we could. Days like that, they’re the most memorable. The View

“As pilots our hours are limited; we’re only allowed to be on duty for 12 hours. A typical day starts at 7am at RAF Northolt…”

A unique challenge As pilots our hours are limited; we’re only allowed to be on duty for 12 hours. A typical day starts at 7am at RAF Northolt, where lots of safety checks are carried out. As you might imagine, when flying over an exposed, urban, built-up area, the risks are significant, so we spend a lot of time making sure it’s safe. But flying in London has its own unique challenges. For a start, there’s a lot of air traffic. There’s Heathrow and City Airport, as well as helicopters including police, commercial helicopters and other air ambulances - it’s a really busy and complex bit of air space. The View

Normally, over an open area it’s safest to fly and stay at a certain altitude, but we’re limited with how high we can go because of air traffic above us. We might fly at 1,000 feet but now we’ve got the buildings from below to contend with, along with other elements such as cranes and drones. Fortunately our helicopters are designed specifically for flying in this kind of environment, but it is challenging. Proudest moment Despite this, there are definitely moments that make me really proud. Recently I had the amazing

privilege to fly with His Royal Highness The Duke of Cambridge, who flew the aircraft to The Royal London Hospital to mark our 30th anniversary. Taking off from Kensington Palace with the Duke in the captain’s seat, whilst having a good chat about how and what we do, was a huge highlight. But it’s knowing that our service is funded by the people of London which make me proudest. To know that people care enough to keep us in the air is really special. It’s a real privilege to be part of that. You can follow Neil on Twitter @Capt_Dude and London’s Air Ambulance Charity @LDNairamb. 05

It’s a shocking statistic that currently, only 10% of people who collapse from a heart attack outside of hospital survive. If the heart is not restarted early, the chances of survival fall dramatically. Even in cases where the patient is resuscitated using conventional methods such as chest compressions, there is a significant chance of permanent damage to organs, including the brain. London’s Air Ambulance Consultant,Dr Ben Singer explains how by saving time, more lives can be saved. “For patients who have a cardiac

“Using a combination of new equipment and specialist techniques developed over 4 years, the study will take place in the North East London area and will be the first of its kind in the UK.”

arrest in hospital, there is a technology called Extra-Corporeal Membrane Oxygenation (ECMO). This effectively replaces the function of the heart and lungs, by taking blood out of the body, adding oxygen, and returning it under pressure. This has resulted in increased survival rates without brain damage. However, for a patient outside of hospital who experiences cardiac arrest, it can take between 45 and 60 minutes to begin this treatment, meaning the effectiveness is greatly reduced. “The evidence suggests that if ECMO is started within 30

minutes of a collapse, the patient’s outcome is significantly improved. London&#39;s Air Ambulance is working together with London Ambulance Service and Barts Health NHS Trust in a unique research collaboration to launch the Sub30 feasibility study. This will bring the technology to the patient, allowing ECMO to be started within 30 minutes, at the scene. “Using a combination of new equipment and specialist techniques developed over 4 years, the study will take place in the North East London area and will be the first of its kind in the UK.”

INSPIRING EXCELLENCE For the last 30 years, London’s Air Ambulance has been a world leader in the field of pre-hospital care. Through a combination of research, innovation and educational activities, it has influenced clinical guidelines, governance standards, and the practice of other Air Ambulances, not only in the UK but also overseas. In order to share this expertise more broadly, in 2013 The Institute of Pre-Hospital Care at London’s Air Ambulance was founded. This year we are proud to announce the launch of our first Masters of Science in Pre-Hospital Medicine. This new and innovative programme will be run in partnership with the prestigious Queen Mary University of London and will be teaching successful applicants from September.

Following on from the hugely successful iBSc in Pre-Hospital Medicine programme, the MSc is designed for experienced Doctors and Paramedics who are passionate about pre-hospital medicine. Running over three years (part-time), it comprises of a variety of taught modules related to pre-hospital medicine in the first two years culminating in a written dissertation in year three. The course will provide a realistic and practice based medical education to the next

generation of specialists at the forefront of vital services such as ours.

You can also play a part in saving the lives of Londoners in the future, by including a gift in your Will to London’s Air Ambulance. Each year, more of our amazing supporters from all walks of life are choosing to do the same. If this is something you have ever considered, or if you would just like to find out more, please call us on 020 3023 3320 or email legacies@londonsairambulance.org.uk