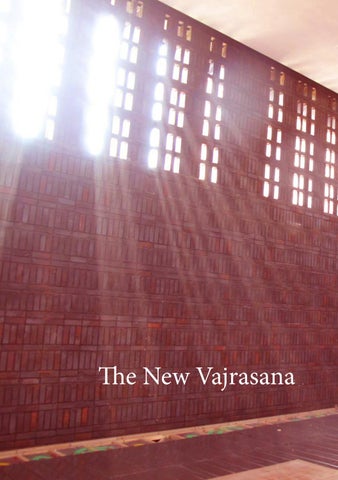 Chairman’s welcome A very warm welcome to Vajrasana, our new Buddhist retreat centre. In today’s world, the values that Buddhism teaches such as awareness, kindness, personal responsibility and generosity are needed more than ever. But these are challenging ideals to live up to, particularly in our commercially driven culture, and the fast-paced urban environments that many of us live in. Often it is only on a retreat that we glimpse our real potential and find inspiration for positive change. When we’re on retreat, we can leave behind our inboxes and to-do lists and fully immerse ourselves in spiritual practice. With the opening of this pioneering building, for the first time the London Buddhist Centre is able to offer retreats in a space fully designed for and dedicated to Buddhist practice. All aspects of the architecture – practical, aesthetic and environmental – support the values we are trying to bring to life. The communal and sacred spaces embody a collective wisdom about retreats that has developed in our community over the years. The retreat centre has a wider significance too, as the London Buddhist Centre is part of an international movement helping individuals to transform their lives and to act together as a force for good in the world. So I hope it is of value not just for those lucky enough to come on retreat here, but for the establishment of Buddhism within our wider culture. I want to thank all the people who have contributed to making this retreat centre possible by giving generously to this project and to previous retreat centres. In a very real sense, this retreat centre has only come into being thanks to a continual flow of generosity from thousands of people over nearly five decades. I hope you enjoy your time here. Jnanavaca Chairman, London Buddhist Centre

The London Buddhist Centre In 1976, a burnt-out, derelict fire station in a downbeat part of London was given by the Greater London Council to a small group of Buddhists. They promised to make it into a beautiful public centre for teaching meditation and Buddhism. Local residents took a bit of persuading about ‘the Buddhists’, but the Buddhists worked hard and won respect. It took three years to renovate the building. Floors were laid, shrine rooms hammered out, and a Buddha statue was sculpted and installed in what had once been the fire station’s engine shed.

As the economy of the 1980s boomed and busted, hundreds of men and women gave their time, energy and resources to create an urban oasis in the heart of London’s East End. Cafes and cooperatives sprung up, lotuses and winged horses appeared on the walls of E2. The old fire station became an improbable Western outpost of the Buddha’s teaching. The London Buddhist Centre was part of the vision of Sangharakshita, who founded the Triratna Buddhist Order and community. He believed Buddhism could bring about positive change, for individuals and society at large. Going on retreat was a vital part of the practice. In those days the LBC had no retreat centre, so getting away to the country with others meant renting a farm, a holiday let – anything with a roof.

Water Hall and Potash Farm The LBCâ&amp;#x20AC;&amp;#x2122;s first rural retreat venue was Water Hall in Suffolk (below), which was purchased in 1987 with generous help from two Order members. This cut out the cost of hiring venues and made retreats much easier to arrange. Water Hall was quiet and remote. It was next to an airstrip once used by an American heavy bombardment squadron. On a summerâ&amp;#x20AC;&amp;#x2122;s day, if a southerly breeze picked up, the local chicken farm seemed very close. Despite this and rumours of a resident ghost, many people were fond of Water Hall and went back often. Volunteers extended the roof to get another bedroom in, pulled down a piggery to make way for a pond and knocked together a food store.

Throughout the nineties, meditation was moving from the fringes of society towards the mainstream, and demand for retreats steadily increased. However, there was not much scope for expanding at Water Hall so in 1998 the LBC launched an appeal for a bigger and more beautiful retreat centre. It had to be within easy reach of London, secluded, with plenty of outbuildings and enough land for some solitary cabins. After two years of fundraising, the hunt began for a property somewhere in East Anglia. Eventually a small delegation from the LBC pulled up the driveway of Potash Farm (right), just five miles down the road from Water Hall.

Potash Farm becomes Vajrasana The farmer was retiring and wanted to sell to someone who would look after the old place. He certainly didn’t expect Buddhists to turn up. They walked around his garden admiring the fruit trees and Ginkgo biloba. There were lots of outbuildings, six acres of paddock and pleasant walks around the gently rolling Suffolk countryside. It was perfect and within budget. The Chairman assured the farmer that retreatants would be enjoying his farmhouse for at least fifty years to come. The story goes that the old farmer borrowed a book on Buddhism from a local library and afterwards decided to accept the offer. Potash Farm was re-named Vajrasana, after the mythical spot on which the Buddha attained Enlightenment. On a tight budget and with lots of volunteer help, sleeping and kitchen (and sewage) capacity was created for up to thirty-four retreatants. Two solitary huts were built in the corners of the paddocks. A garage was turned into a men’s dorm. A cavelike shrine room was made out of straw bales set in a circle in the barn. A team spent two weeks rendering the straw with concrete. The number and range of retreats grew. Soon there were retreats for beginners and for those with more experience, retreats for parents and children, and intensive meditation weeks. Buddhists were not the only ones catered for – there were retreats for people coping with stress, addiction and depression, and retreats for carers from East London.

A bold new idea Mahananda (pictured right) loved running retreats to give respite to carers from the East End. One day he might live at Vajrasana, he thought, maybe as the gardener. But sadly, in 2008, he died of a stroke. In his will he left his house in Primrose Hill to the London Buddhist Centre. A team at the LBC got together to talk about a big idea: could Mahanandaâ&amp;#x20AC;&amp;#x2122;s legacy be used to build and design a new retreat centre from scratch? There would need to be a huge increase in standing-order donations, new loans from the bank and a change in company structure. There were other legacies which helped, including ÂŁ100,000 from the fashion designer Alexander McQueen (below left). After much consideration and costing, the project was given the goahead and initial ideas were sketched out. It was a time for creativity and courage. The design must reflect the Buddhist tradition, but also incorporate the new cultural forms, the new understanding of Buddhist practice emerging in the West. A team from the architecture firm Walters &amp; Cohen came on a retreat at Vajrasana to get a feel for what we do, and there began a close collaboration with the LBC. They had to keep to the footprint of the existing barns and respect the scale, height and materials of the farmhouse. A bold design emerged, and in summer 2014 the resident bats were relocated and the farm buildings were pulled down.

Special features of the new Vajrasana For the first time a resident community will live at Vajrasana, quartered in the old farmhouse. The new retreat centre itself has many special features. The building is energy-efficient and has a low carbon footprint, designed and built to PassivHaus standards. It will have lower energy bills than the previous retreat centre despite nearly doubling in capacity, to 60 retreatants. The building uses traditional techniques such as triple glazing, insulation and photovoltaics on the roof as well as design features which use orientation and space to maximise natural light, heating and cooling. The Sangha courtyard (pictured below, in construction) is designed as a place of colour and communality, somewhere to enjoy and hang out. All the bedrooms, the dining area and the lounge lead out into it.

Next is the Stupa Courtyard (above), arranged around this ancient Buddhist architectural form, which is also a visual reminder of impermanence. The ashes of Sangharakshita’s teacher and friend Dhardo Rinpoche will be placed inside the stupa during the opening ceremony. The Stupa Courtyard is specifically designed for collective Buddhist rituals and walking meditation, while the Akshobhya Garden (following page, upper right) is intended for more solitary contemplation. The figure floating over the pond, cast in bronze, is Akshobhya, the Buddha of ‘mirror-like’ wisdom who sees and reflects things as they truly are.

The Stupa Courtyard, Akshobhya Garden and shrine room together form the ‘Temple Precinct’, all the elements of which eventually draw us towards the Buddha in the shrine room. By the time you reach it, you will have crossed a boundary, started an inner journey, a shift reflected in the shrine room’s design. Daylight falls through the high lattice of the ‘jali wall’, moving around the shrine room during the day and passing across the Buddha. The large Buddha figure combines historical forms with suggestions of the archetype that the Buddha embodies. It sits in a golden niche, symbolising the beauty of the transcendental breaking through into the shrine room. 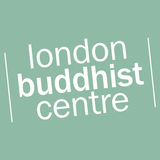