praised by specialists as one of the main advantages of the LC-A+ compared to other compact cameras. It’s quicker to use than any auto focus camera and you can always set your own focal depth. It’s dead simple: without even looking down, pull the Focus Lever [17] to the top (0.8 meter, about 3’) if you want to go close-up. Move down one stop to shoot subjects at 1.5m (4.5’) and one more stop for subjects at 3m (10’). If you want to Lomograph into the distance, then push the Focus Lever [17] all the way down, right down to the bottom (• = infinity = everything further away than 3m or 10’). Now you just have to practice: up is close, down is far away, the middle is in-between (the length of one to two people away), up, down, up, down, until setting the focus of your LC-A+ becomes second nature to you. You’ll soon see that you’re much faster than with any other camera

and you can decide exactly when you take a particular shot and what’s in focus. Take special care to set the focus properly as the light gets lower outside or if you’re shooting indoors.

THE AUTOMATIC EXPOSURE + + + + The LC-A+ is a 100% automatic exposure dream machine. Using its Light Meter [9], it looks at the scene in front of the lens and automatically sets the shutter speed and aperture for a correct exposure. For the old-school LOMO people, you’ll notice that the old exposure setting (including Mr. “A”) is long gone. Say goodbye to mistakes and accidentally shooting a whole roll of film at f/16. In very bright conditions, the LC-A+ can fire its shutter at a speed up to 1/500 per second. In low light, it can keep

its shutter open for as long as necessary to expose the shot. Read on for more about that.

+ + TAKING A SHOT AND THE TWO CLICKS By now, you know the routine for shooting. Set the ISO, set the focus, turn the Advance Wheel [7] and hit the Shutter Release [2]. Doing so in the daytime results in a solid “click” of the shutter and an instant exposure in a fraction of a second. However, everything changes when the lights go low. The LOMO’s automatic exposure will hold open the shutter for as long as needed for a proper exposure. This allows you to take pictures in the evening, by artificial light and by bright moonlight without a flash! We call this a “long exposure.” You’ll get

the bright colors of photography natural, ambient light: soft &amp; glowing hues, streaming light rays, comically long noses, blurred moving subjects, etc. When you do this, it’s important to listen for the “two clicks.” The first click happens when you hit the Shutter Release [2] – for this is the sound of the shutter opening. Now, keep that button pressed! Wait for the second click, which means that enough light has been collected for a proper exposure and the shutter has closed. This can take ten seconds or even longer - it depends on how much light is reaching your LC-A+. When doing long exposures, hold your LOMO as still as you can, prop it up on something, or screw it into a tripod via the Tripod Thread [16]. You’ll have some advance warning by way of the Slow Shutter Light [18] - a little red LED light on the right side of the viewfinder that glows when the light outside is low. If 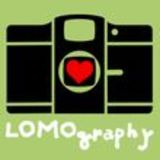