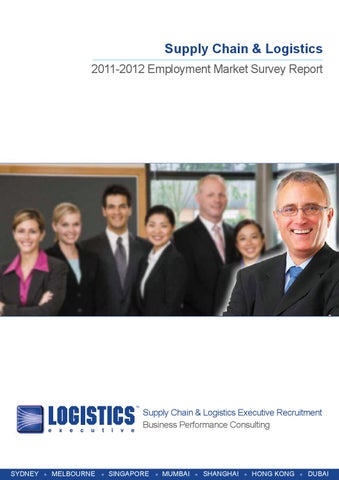 Key findings Welcome to the 2011-2012 Supply Chain and Logistics

research undertaken in mid 2011. This is our fifth consecutive

This year 62.48% of those surveyed said it had been more

annual Report developed for the international industry we

serve during a period of significant economic uncertainty

whilst only 13.76% indicated they had found it easier than

in the northern hemisphere and continued growth in key

the previous year to recruit.

will rise in the next 12 months, this is consistent with

24.33% of the total respondents employed in Australasia,

predictions from the previous survey. A slight increase

in the expectation by 13.82% of respondents this year

that staff numbers would decrease. This compares with

based in North East Asia and China.

About 67% of this year’s survey respondents indicated that

there had been business growth during the previous year,

indicated that they have an Undergraduate Degree, 37.40%

this is similar to the result from last year indicating consistent

of the total respondents indicated they possess Postgraduate

growth across most markets surveyed. Predictions for growth

previously. Approximately 16.50% of this year’s respondents

Whilst career development remains the highest driver of

15.22%. These four drivers outweigh all of the other results

Wages and salaries are again predicted to increase in line

and are the most important reasons as to why people join

with the demand for executive talent and the expectation

of continued economic growth, particularly in key markets across the APAC region. Upward pressure on remuneration

packages is particularly felt in the areas of highest economic

with 93.78% of the total respondents indicating that they

growth such as North Asia, South East Asia, and the Indian

would relocate for work and 53.96% indicating that they would

relocate internationally if the opportunity arose. 32.53% of respondents in fact indicated that career development is

their sole reason for relocation, followed by 21.08% who

with the continuing Resources and Energy boom driving

leading to significant Executive Talent shortages across the

to change roles for more for personal development than

wider supply chain. While other areas of the country and

Our previous Survey results have shown that respondents

survey. 51.87% of those surveyed are expecting salary

consider Corporate Social Responsibility (CSR) is as a

increases of 10% or more in the year ahead by comparison

to 48.38% previously. These results suggest continued

CSR continues to be a priority with about three quarters

upward pressure on salary and wages.

of those surveyed identifying this issue as a focus within their organisation, continuing the upward trend shown in each year since our first Survey in 2006.

external factors they expected to impact their business in

program said they believed their organisation should, this

the next 12 months CEO’s and Directors predicted Financial

the rise of CSR as an issue of consideration by CEOs.

by Economic Slowdown in level of importance.

The key driver for a CSR strategy amongst those surveyed

was the Contribution to Society (76.92%), followed closely

areas of most concern are Talent Retention, Talent Attraction,

by Health and Safety (71.25%) and Environmental reasons

and Leadership Development, these being of almost identical

THANKS FOR YOUR PARTICIPATION

Consumer Loyalty in that order.

The 2011-12 report is designed to assist you to make informed decisions about your business, your employees

and the industry as a whole. This Report summarises only

progression as a business imperative it also underlines

some of the key findings from the Survey, don’t hesitate to

ongoing barriers to its wider adoption. These factors were

relating to particular Survey subject matter or results from

a specific geographic region. Thank you to the industry

to include CSR as a meaningful element in the business

executives across many countries who took the time to

complete the survey and we look forward to inviting you to participate in next year’s Survey.

EXECUTIVE TALENT SHORTAGES SEEN AS MAJOR CHALLENGE CEO’s and Directors surveyed were asked to identify the key challenges to their businesses for the 12 months ahead, results showed Profitability, Customer Satisfaction, Productivity, Leadership Management, Sustainability, Retaining Talent, Financial Restraints, followed by Attracting Talent were ranked in that order. When asked to identify

Survey methodology An on-line survey of approximately 10-15 minute duration was emailed to more than 45,000 people within the Supply Chain & Logistics Industry in Australia, Oceania, Africa, America, Asia, Europe, the Middle East and New Zealand in late 2011. 3,550 respondents completed the survey. NB: The results are purely indicative in terms of overall trends within the industry. Disclaimer: Logistics Executive has compiled this report using data from which, to the best knowledge of Logistics Executive, was accurate as at the date of the publication. Results published in this report are for the general interest of readers and the industry. All material is published with due care and in good faith, but no responsibility will be accepted for omissions, typographical, or other printing errors or situations that may have taken place after publication. Logistics Executive disclaims all responsibility for any harm or loss arising from use or otherwise of the information provided within the report. All rights reserved. No part of this publication may be reproduced without the prior permission of Logistics Executive.

Survey demographic In which region of the world are you employed in?

The America’s (North, Central or South) Other

• 13.34% of the total respondents indicated that they are employed in

Roles & positions Please select the function that primarily best describes what you do?

Overall findings â&#x20AC;˘ The top four functions that describe the respondents are Transport and Logistics at 22.97%, 13.26% employed in a Supply Chain role, 11.40% in Executive Management (Chief Executive Officer, Managing Director, Director) and 10.57% in Distribution and Warehousing. â&#x20AC;˘ Transport and Logistics continues to be the number one function in which people in this industry are employed in each survey.

COMPARISON TO PREVIOUS YEARS In the 2010-2011 report 23.91% of the total respondents indicated that they were employed in a Transport and Logistics role. The results for the last three years have been comparable for all of the key roles.

Salary and wages In your last review, by approximately what percentage did your salary increase? 0-2%

In your next review by approximately what percentage do you expect your salary to increase? 14.23%

overall findings â&#x20AC;˘ 62.82% of the total respondent expect an increase of 6% or more, indicating many organisations will face wage pressure in 2012.

COMPARISON TO PREVIOUS YEARS The 2010-2011 report showed an increase of Degree qualified people on past year results.

Skills Shortage Areas within the industry that have been difficult to recruit in? Customer Services

that Transport and Logistics is the most difficult area to recruit in. • This was followed closely by 10.66% in

COMPARISON TO PREVIOUS YEARS In the 2010-2011 report 13.35% of the total respondents indicated that Transport and Logistics was the most difficult area to recruit in. In the 2008 results 13.92% of the total respondents indicated that it was in the area of Logistics. In four years very little has changed in the areas that suffer with a skills shortage; in fact the results point to a worsening.

To what extent is the skills shortage affecting your business growth? Significant critical impact 5.17% To a high degree 15.30%

• 73.55% of businesses are affected by the on-going skills shortage to some

degree or greater. • 5.17% of businesses claim that the skills shortage is having a significant critical impact on their business.

COMPARISON TO PREVIOUS YEARS • The 2011-2012 survey shows an increase

in businesses affected by the skills shortage. The 2010-2011 result showed that just 69% of businesses were affected.

It is becoming HARDER to source/hire quality staff to meet the business demands 62.48%

It is becoming EASIER to source/ hire quality staff to meet the business demands 13.76%

OVERALL FINDINGS • 62.48% of the total respondents are finding it harder to source and hire quality staff to meet business demand.

What change in your company’s activities or growth this financial year did you see compared to last year? Remained the same 17.91% Overall findings • 66.90% of the total respondents indicated that they believe that their company’s growth increased in the last financial year.

Business activities & company growth What are your expectations of your company’s activities or growth next financial year compared to this year?

Remained the same 16.50% Overall findings • 75.49% of the total respondents indicated

that they believe that their company’s

activities or growth will increase in the

next financial year. • This shows a dramatic decrease in expectation of growth from this year’s survey vs. the 2010-2011 results.

In the next financial year what do you forecast that the staff levels of your company will be?

OVERALL FINDINGS • 57.76% of the total respondents forecast that their staff levels will increase in the next financial year.

Business activities & company growth What do you understand to be your company’s staff turnover by percentage?

that staff turnover is as much as 10%.

that staff turnover is less than 5%.

In the current financial year did the staff levels of your company increase, decrease or remain the same?

OVERALL FINDINGS • 53.82% of the total companies indicated that their staff levels increased in the current financial year.

As an employer, what are the major factors contributing to people leaving your organisation? More money

Challenges for the next year As a CEO/Director, what are the challenges facing your business in the next year? Overall findings • Chief Executive Officers/Directors were asked to identify the key issues and areas that would challenge their business in the next twelve months. • 90.88% of the total respondents indicated that profitability was the main challenge. • This was followed closely by 86.76% believing that customer satisfaction would be a challenge and 83.65% highlighted productivity. Also rating highly was retaining talent at 69.41% and leadership management at 76.76%.

Leadership development Most important focus in the next 12 months? Overall findings • Respondents were asked to identify the most important areas that the organisation needs to focus on in the next twelve months. • 81.22% of the total respondents indicated Staff Retention is the main area to focus on. This is equalled by Leadership Development. • This was followed closely by 81.06% focussing on Talent Attraction and 79.90% identifying Training. • Both Talent Attraction and Training are significantly up on past results.

Do you believe your organisation should have a CSR program/focus?

believing that their organisation should have

a CSR program each year since this survey

OVERALL FINDINGS • 60.16% of the total respondents believe that their organisation should have a CSR program.

Influence of Corporate Social Responsibility Do you measure a Return On Investment (ROI) on CSR program(s)?

Overall findings • 32.17% of the total respondents indicated that they do not measure a Return on Investment (ROI) on their CSR program.

COMPARISON TO PREVIOUS RESULTS In 2009 only 30.03% of the total respondents believed that cost was the main obstacle, with 30.48% believing that it was lack of support from senior management. The 2010-2011 results are consistent with the 20112012 results.