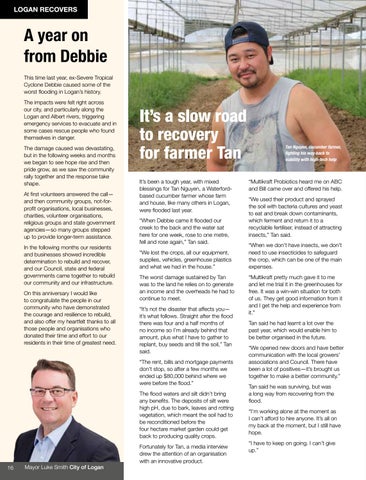 A year on from Debbie This time last year, ex-Severe Tropical Cyclone Debbie caused some of the worst flooding in Logan’s history. The impacts were felt right across our city, and particularly along the Logan and Albert rivers, triggering emergency services to evacuate and in some cases rescue people who found themselves in danger. The damage caused was devastating, but in the following weeks and months we began to see hope rise and then pride grow, as we saw the community rally together and the response take shape. At first volunteers answered the call— and then community groups, not-forprofit organisations, local businesses, charities, volunteer organisations, religious groups and state government agencies—so many groups stepped up to provide longer-term assistance. In the following months our residents and businesses showed incredible determination to rebuild and recover, and our Council, state and federal governments came together to rebuild our community and our infrastructure. On this anniversary I would like to congratulate the people in our community who have demonstrated the courage and resilience to rebuild, and also offer my heartfelt thanks to all those people and organisations who donated their time and effort to our residents in their time of greatest need.

It’s a slow road to recovery for farmer Tan It’s been a tough year, with mixed blessings for Tan Nguyen, a Waterfordbased cucumber farmer whose farm and house, like many others in Logan, were flooded last year. “When Debbie came it flooded our creek to the back and the water sat here for one week, rose to one metre, fell and rose again,” Tan said. “We lost the crops, all our equipment, supplies, vehicles, greenhouse plastics and what we had in the house.” The worst damage sustained by Tan was to the land he relies on to generate an income and the overheads he had to continue to meet. “It’s not the disaster that affects you— it’s what follows. Straight after the flood there was four and a half months of no income so I’m already behind that amount, plus what I have to gather to replant, buy seeds and till the soil,” Tan said. “The rent, bills and mortgage payments don’t stop, so after a few months we ended up $80,000 behind where we were before the flood.” The flood waters and silt didn’t bring any benefits. The deposits of silt were high pH, due to bark, leaves and rotting vegetation, which meant the soil had to be reconditioned before the four hectare market garden could get back to producing quality crops.

Fortunately for Tan, a media interview drew the attention of an organisation with an innovative product.

Tan Nguyen, cucumber farmer, fighting his way back to viability with high-tech help

“Multikraft Probiotics heard me on ABC and Bill came over and offered his help. “We used their product and sprayed the soil with bacteria cultures and yeast to eat and break down contaminants, which ferment and return it to a recyclable fertiliser, instead of attracting insects,” Tan said. “When we don’t have insects, we don’t need to use insecticides to safeguard the crop, which can be one of the main expenses. “Multikraft pretty much gave it to me and let me trial it in the greenhouses for free. It was a win-win situation for both of us. They get good information from it and I get the help and experience from it.” Tan said he had learnt a lot over the past year, which would enable him to be better organised in the future. “We opened new doors and have better communication with the local growers’ associations and Council. There have been a lot of positives—it’s brought us together to make a better community.” Tan said he was surviving, but was a long way from recovering from the flood. “I’m working alone at the moment as I can’t afford to hire anyone. It’s all on my back at the moment, but I still have hope. “I have to keep on going. I can’t give up.” 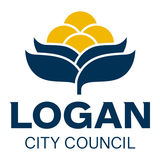