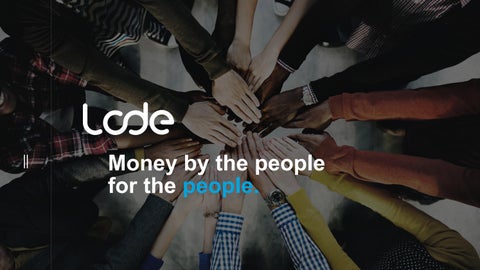 LODE is an ambitious project conceived by sound money advocates who started operations at the beginning of 2017. The goal was to build a digital monetary system using investment grade silver and gold to restore real value to money. “Money by the people for the people.”

The LODE “bullion engine” functions as the de facto “central bank” for the LODE Project. Members deposit physical silver and gold, and/or at via our bullion dealers. Then the deposited silver and gold is minted on to the blockchain for the members via the LODE-chain (powered by Hyperledger), Distributed Ledger Technology (DLT).

HOW LODE IS STRUCTURED.

LODE (Switzerland) AG is the capital management entity for the LODE Project and it oversees the regulatory and compliance requirements for both Europe and United States. It is the 100% owner of LODE Global, LODE GmbH and LODE Payments International LLC.

LODE (Switzerland) AG is jurisdictionally compliant for accredited investors in Europe which extends to 27 EU countries, Switzerland, Norway and Iceland. It has led a European wide passportable prospectus with the FMA in Liechtenstein for the sale of the LODE Token which is the project’s security token.

LODE is jurisdictionally compliant for accredited investors in Europe, which extends to 27 EU countries, Switzerland, Norway and Iceland.

LODE1 Anstalt issues no tokens. It functions as the LODE Association Community Foundation. It is a holding company based in Liechtenstein.

Based in Cayman Islands, LODE Global is the vaulting operations that issues AGX/ AUX Coins to distributors.

LODE (Switzerland) AG issues LODE Tokens and any future securities products. It is the capital management company that sells LODE to CM-Equity for sale within EU/EEA.

LODE GmbH has partnered with CM-Equity, a licensed German Financial Institute and Merchant Bank to comply with KYC/AML regulations where LODE Token are sold within the EU/EEA through an EU regulator approved prospectus.

LODE GmbH is the Tied Agent of CM-Equity and brokers the sale of LODE Token to B2B and B2C investors.

Based in Delaware, LODE Payments International is the payment and merchant services rails for businesses and individuals.

THE LODE ECO-SYSTEM. LODE mints each AGX Coin and AUX Coin from the vaulted silver and gold, and sells them into the global marketplace for sending, spending and storing value.

Quali ed LODE Token holders receive micro-payouts every 52 days from the sale of the AGX and AUX Coins, and from the transactional fees earned from their global usage. Holders also bene t from the increase in the LODE Token price due to the traditional metrics of scarcity and a maximum supply of only 77 million LODE Tokens.

BENEFIT: • THE REWARDS POOL IS 10% OF THE PREMIUM ON ANY AGX COIN AND AUX COIN SOLD DURING EACH 52 DAY CYCLE.

• PREMIUMS RANGE FROM 10% TO 18% DEPENDING ON THE VOLUME OF A BUYER’S PURCHASE.

• THE LODE PROJECT WILL BECOME MORE PROFITABLE AS MORE REVENUE STREAMS ARE ADDED IN THE FUTURE, THUS EXPANDING THE REWARDS POOL.

• ALL MICRO-PAYOUTS (REWARDS) WILL BE PAID IN AGX COINS.

LODE TOKEN BENEFITS. The LODE Token is the virtual digital equity token that represents the entire global LODE Project. Through an EU-regulator approved prospectus o ering, the LODE Token will be able to be marketed and sold as security token through LODE GmbH, Germany. Hereby, LODE GmbH acts as Tied Agent to CM-Equity AG, a fully regulated German Financial Institute and Merchant Bank. The total number of LODE Tokens represent 100% of the ownership of the entire LODE Project globally.

AGX COIN BENEFITS. The AGX Coin is a digital-silver stable asset designed for commerce and backed by physically vaulted silver. Designed to be an easy part of everyday commerce, each AGX Coin is backed by one gram of independently vaulted, audited, and insured 99.99% investmentgrade silver.

AUX COIN BENEFITS. The AUX Coin is a digital-gold stable asset designed for commerce and backed by physically vaulted gold. Also designed to be an easy part of everyday commerce. Each AUX Coin is backed by a one milligram of independently vaulted, audited, and insured 99.99% pure gold.

AGX and AUX Coins are legally designated as Utility Coins and act as pick-up slips for vaulted silver and gold. OUR DIGITAL ASSETS RUN AT THE SPEED OF BUSINESS ON THE LIGHTNING FAST SYSCOIN BLOCKCHAIN.

LEARN MORE ABOUT THE SYSCOIN PLATFORM

ONE OPTION FOR LODE INVESTMENT. LODE Payments International LLC (“LPI”) acts as the payment and merchant services rails for the LODE Project. LPI uses the LODEpay Wallet, which is available worldwide via app stores. In the United States, LPI has engaged Entoro Securities LLC as its Broker Dealer to conduct the Reg D capital raise of $11M (4M Shares at $2.75USD with a 12-month forced conversion of 2 shares for 1 LODE Token (2:1)).

Pro ts from the entire LODE Project, including LPI, ow back to the LODE Token holders as micro-payouts (Rewards) every 52 days. Holders further bene t as the “book” value of the LODE Token increases through the traditional metrics of scarcity as the available supply of LODE Tokens diminishes.

LEGAL LODE is jurisdictionally legal in both Europe and the USA through our partnerships.

GLOBAL AGX and AUX Coins are ready for global distribution.

THE FUTURE IS BRIGHT. GLOBAL REACH

LODE is not just designed for the 900M people in North America and Europe. It also is developed for the emerging economies in South America, Africa, the Indian Subcontinent and Southeast Asia. Using partnerships, it’s target is 3.8B users in the emerging payments space using the LODEpay multi asset mobile wallet available at Apple App Store and Google Play Store.

We are currently in negotiation with several large entities in developing economies with user-bases in the hundreds of millions.

Take the LODEpay System for a test drive, download the Wallet App, today!

LODE is an ambitious project conceived by big thinkers who started operations at the beginning of 2017. The goal was to build a digital money system using precious metals and restore value to money. “Money by the people for the people.”