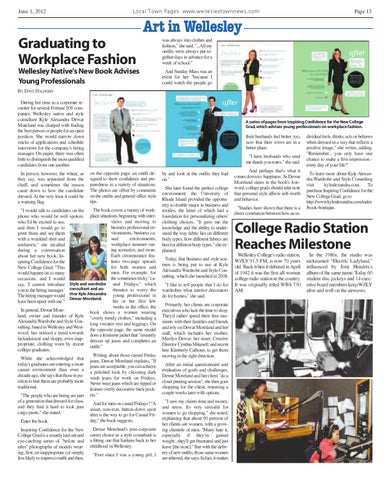 was always into clothes and fashion," she said. "...All my outfits were always put together days in advance for a week of school."

BY DAVE HALPERIN During her time as a corporate recruiter for several Fortune 500 companies, Wellesley native and style consultant Kyle Alexandra Dewar Moreland was charged with finding the best person or people for an open position. She would narrow down stacks of applications and schedule interviews for the company's hiring manager. On paper, there was often little to distinguish the most qualified candidates from one another. In person, however, the wheat, as they say, was separated from the chaff, and sometimes the reason came down to how the candidate dressed. At the very least it could be a warning flag.

A series of pages from Inspiring Confidence for the New College Grad, which advises young professionals on workplace fashion.

their husbands feel better, too, now that their wives are in a better place. "I have husbands who send me thank-you notes," she said. on the opposite page, an outfit designed to show confidence and preparedness in a variety of situations. The photos are offset by comments on the outfits and general office style tips.

The book covers a variety of work"I would talk to candidates on the phone who would be well spoken, place situations, beginning with interviews and moving to who I'd be excited to see, business professional enand then I would go to vironments, business cagreet them and see them sual environments, with a wrinkled shirt and workplace summer outunshaven," she recalled ing scenarios, and more. during a conversation Each circumstance feaabout her new book, Intures two-page spreads spiring Confidence for the for both women and New College Grad. "This men. For example, for would happen on so many the sometimes tricky "caoccasions, and I would say, 'I cannot introduce Style and wardrobe sual Fridays," which threaten to worry the you to the hiring manager.' consultant and auThe hiring manager would thor Kyle Alexandra young professional in Dewar Moreland. his or her first few have been upset with me." weeks in the office, the In general, Dewar Morebook shows a woman wearing land, owner and founder of Kyle "overly trendy clothes," including a Alexandra Wardrobe and Style Con- long sweater vest and leggings. On sulting, based in Wellesley and West- the opposite page, the same model wood, has noticed a trend towards dons a feminine jacket that "instantly lackadaisical and sloppy, even inap- dresses up jeans and completes an propriate, clothing worn by recent outfit." college graduates. Writing about those casual Friday While she acknowledged that jeans, Dewar Moreland explains, "If today's graduates are entering a more jeans are acceptable, you can achieve casual environment than even a a polished look by choosing dark decade ago, she says that those in po- wash jeans for work on Fridays. sition to hire them are probably more Never wear jeans which are ripped or traditional. feature overly decorative back pock"The people who are hiring are part ets." of a generation that dressed for class, And for men on casual Fridays? "A and they find it hard to look past smart, non-iron, button-down sport cargo pants," she stated. shirt is the way to go for Casual FriEnter the book. Inspiring Confidence for the New College Grad is a smartly laid out and eye-catching series of "before and after" photographs of models wearing, first, an inappropriate (or simply less likely to impress) outfit and then,

day," the book suggests. Dewar Moreland's post-corporate career choice as a style consultant is a fitting one that harkens back to her childhood in Wellesley. "Ever since I was a young girl, I

by and look at the outfits they had on." She later found the perfect college environment: the University of Rhode Island provided the opportunity to double major in business and textiles, the latter of which laid a foundation for personalizing others' clothing choices. "It gave me the knowledge and the ability to understand the way fabric lies on different body types, how different fabrics are best for different body types," she explained. Today, that business and style acumen is being put to use at Kyle Alexandra Wardrobe and Style Consulting, which she launched in 2008. "I like to tell people that I do for wardrobes what interior decorators do for homes," she said. Primarily, her clients are corporate executives who lack the time to shop. They'd rather spend their free moments with their families and friends and rely on Dewar Moreland and her staff, which includes her mother, Marilyn Dewar; her sister, Creative Director Cynthia Mikesell; and recent hire Kimberly Calhoun, to get them moving in the right direction. After an initial questionnaire and evaluation of goals and challenges, Dewar Moreland and her client "do a closet pruning session"; she then goes shopping for the client, returning a couple weeks later with options. "I save my clients time and money, and stress. It's very stressful for women to go shopping," she noted, explaining that about 90 percent of her clients are women, with a growing clientele of men. "Many hate it, especially if they've gained weight...they'll get frustrated and just leave [the store]." But with the delivery of new outfits, those same women are relieved, she says. In fact, it makes

And perhaps that's what it comes down to: happiness. As Dewar Moreland states in the book's foreword, college grads should take note that personal style affects self-worth and behavior. "Studies have shown that there is a direct correlation between how an in-

dividual feels, thinks, acts or behaves when dressed in a way that reflects a positive image," she writes, adding, "Remember... you only have one chance to make a first impression every day of your life!" To learn more about Kyle Alexandra Wardrobe and Style Consulting visit kylealexandra.com. To purchase Inspiring Confidence for the New College Grad, go to http://www.kylealexandra.com/index /book-boutique.

College Radio Station Reaches Milestone Wellesley College's radio station, WZLY 91.5 FM, is now 70 years old. Back when it debuted in April of 1942 it was the first all-women college radio station in the country. It was originally titled WBS 730 AM.

In the 1980s, the studio was nicknamed "Electric Ladyland," influenced by Jimi Hendrix's album of the same name. Today 60 student disc jockeys and 14 executive board members keep WZLY alive and well on the airwaves.