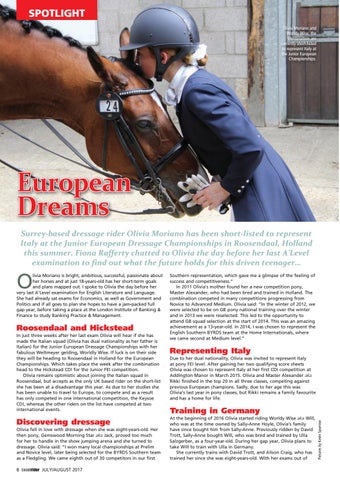 SPOTLIGHT Olivia Moriano and Worldy Wise, the combination are currently short-listed to represent Italy at the Junior European Championships.

European Dreams Surrey-based dressage rider Olivia Moriano has been short-listed to represent Italy at the Junior European Dressage Championships in Roosendaal, Holland this summer. Fiona Rafferty chatted to Olivia the day before her last A’Level examination to find out what the future holds for this driven teenager…

Roosendaal and Hickstead In just three weeks after her last exam Olivia will hear if she has made the Italian squad (Olivia has dual nationality as her father is Italian) for the Junior European Dressage Championships with her fabulous Weltmeyer gelding, Worldly Wise. If luck is on their side they will be heading to Roosendaal in Holland for the European Championships. Which takes place the week after the combination head to the Hickstead CDI for the Junior FEI competition. Olivia remains optimistic about joining the Italian squad in Roosendaal, but accepts as the only UK based rider on the short-list she has been at a disadvantage this year. As due to her studies she has been unable to travel to Europe, to compete and as a result has only competed in one international competition, the Keysoe CDI, whereas the other riders on the list have competed at two international events.

Discovering dressage Olivia fell in love with dressage when she was eight-years-old. Her then pony, Gemswood Morning Star aka Jack, proved too much for her to handle in the show jumping arena and she turned to dressage. Olivia said: “I won many local championships at Prelim and Novice level, later being selected for the BYRDS Southern team as a Fledgling. We came eighth out of 30 competitors in our first

Southern representation, which gave me a glimpse of the feeling of success and competitiveness.” In 2011 Olivia’s mother found her a new competition pony, Master Alexander, who had been bred and trained in Holland. The combination competed in many competitions progressing from Novice to Advanced Medium. Olivia said: “In the winter of 2012, we were selected to be on GB pony national training over the winter and in 2013 we were reselected. This led to the opportunity to attend GB squad selection at the start of 2014. This was an amazing achievement as a 13-year-old. In 2014, I was chosen to represent the English Southern BYRDS team at the Home Internationals, where we came second at Medium level.”

Representing Italy Due to her dual nationality, Olivia was invited to represent Italy at pony FEI level. After gaining her two qualifying score sheets Olivia was chosen to represent Italy at her first CDI competition at Addington Manor in March 2015. Olivia and Master Alexander aka Rikki finished in the top 20 in all three classes, competing against previous European champions. Sadly, due to her age this was Olivia’s last year in pony classes, but Rikki remains a family favourite and has a home for life.

Training in Germany At the beginning of 2016 Olivia started riding Worldy Wise aka Will, who was at the time owned by Sally-Anne Hoyle, Olivia’s family have since bought him from Sally-Anne. Previously ridden by David Trott, Sally-Anne bought Will, who was bred and trained by Ulla Salzgerber, as a four-year-old. During her gap year, Olivia plans to take Will to train with Ulla in Germany. She currently trains with David Trott, and Alison Craig, who has trained her since she was eight-years-old. With her exams out of

livia Moriano is bright, ambitious, successful, passionate about her horses and at just 18-years-old has her short-term goals and plans mapped out. I spoke to Olivia the day before her very last A’Level examination for English Literature and Language. She had already sat exams for Economics, as well as Government and Politics and if all goes to plan she hopes to have a jam-packed full gap year, before taking a place at the London Institute of Banking & Finance to study Banking Practice & Management. 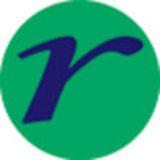 In the Localrider Magazine July August 2017 issue we talk local rider Olivia Moriano about her ambition to represent Italy at the Junior Eur...

In the Localrider Magazine July August 2017 issue we talk local rider Olivia Moriano about her ambition to represent Italy at the Junior Eur...