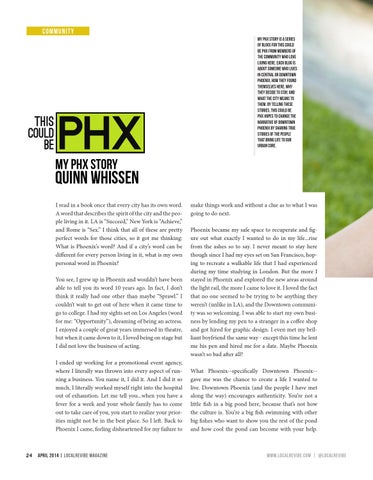 co mm u n i ty My PHX Story is a series of blogs for This Could Be PHX from members of the community who love living here. Each blog is about someone who lives in Central or Downtown Phoenix, how they found themselves here, why they decide to stay, and what the city means to them. By telling these stories, This Could Be PHX hopes to change the narrative of Downtown Phoenix by sharing true stories of the people that bring life to our urban core.

quinn whissen I read in a book once that every city has its own word. A word that describes the spirit of the city and the people living in it. LA is “Succeed,” New York is “Achieve,” and Rome is “Sex.” I think that all of these are pretty perfect words for those cities, so it got me thinking: What is Phoenix’s word? And if a city’s word can be different for every person living in it, what is my own personal word in Phoenix? You see, I grew up in Phoenix and wouldn’t have been able to tell you its word 10 years ago. In fact, I don’t think it really had one other than maybe “Sprawl.” I couldn’t wait to get out of here when it came time to go to college. I had my sights set on Los Angeles (word for me: “Opportunity”), dreaming of being an actress. I enjoyed a couple of great years immersed in theatre, but when it came down to it, I loved being on stage but I did not love the business of acting. I ended up working for a promotional event agency, where I literally was thrown into every aspect of running a business. You name it, I did it. And I did it so much, I literally worked myself right into the hospital out of exhaustion. Let me tell you...when you have a fever for a week and your whole family has to come out to take care of you, you start to realize your priorities might not be in the best place. So I left. Back to Phoenix I came, feeling disheartened for my failure to

make things work and without a clue as to what I was going to do next. Phoenix became my safe space to recuperate and figure out what exactly I wanted to do in my life...rise from the ashes so to say. I never meant to stay here though since I had my eyes set on San Francisco, hoping to recreate a walkable life that I had experienced during my time studying in London. But the more I stayed in Phoenix and explored the new areas around the light rail, the more I came to love it. I loved the fact that no one seemed to be trying to be anything they weren’t (unlike in LA), and the Downtown community was so welcoming. I was able to start my own business by lending my pen to a stranger in a coffee shop and got hired for graphic design. I even met my brilliant boyfriend the same way - except this time he lent me his pen and hired me for a date. Maybe Phoenix wasn’t so bad after all? What Phoenix--specifically Downtown Phoenix-gave me was the chance to create a life I wanted to live. Downtown Phoenix (and the people I have met along the way) encourages authenticity. You’re not a little fish in a big pond here, because that’s not how the culture is. You’re a big fish swimming with other big fishes who want to show you the rest of the pond and how cool the pond can become with your help. 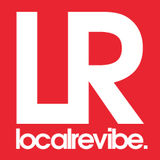