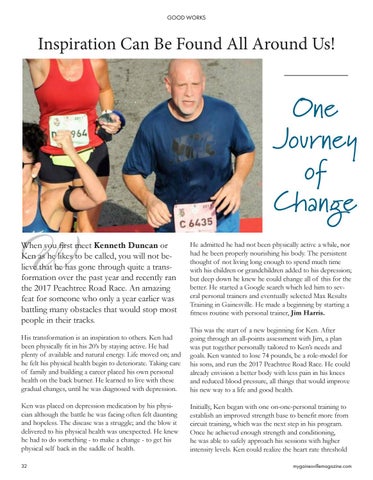 Inspiration Can Be Found All Around Us!

One Journey of Change

When you first meet Kenneth Duncan or Ken as he likes to be called, you will not believe that he has gone through quite a transformation over the past year and recently ran the 2017 Peachtree Road Race. An amazing feat for someone who only a year earlier was battling many obstacles that would stop most people in their tracks.

He admitted he had not been physically active a while, nor had he been properly nourishing his body. The persistent thought of not living long enough to spend much time with his children or grandchildren added to his depression; but deep down he knew he could change all of this for the better. He started a Google search which led him to several personal trainers and eventually selected Max Results Training in Gainesville. He made a beginning by starting a fitness routine with personal trainer, Jim Harris.

His transformation is an inspiration to others. Ken had been physically fit in his 20â&#x20AC;&#x2122;s by staying active. He had plenty of available and natural energy. Life moved on; and he felt his physical health begin to deteriorate. Taking care of family and building a career placed his own personal health on the back burner. He learned to live with these gradual changes, until he was diagnosed with depression.

This was the start of a new beginning for Ken. After going through an all-points assessment with Jim, a plan was put together personally tailored to Kenâ&#x20AC;&#x2122;s needs and goals. Ken wanted to lose 74 pounds, be a role-model for his sons, and run the 2017 Peachtree Road Race. He could already envision a better body with less pain in his knees and reduced blood pressure, all things that would improve his new way to a life and good health.

Ken was placed on depression medication by his physician although the battle he was facing often felt daunting and hopeless. The disease was a struggle; and the blow it delivered to his physical health was unexpected. He knew he had to do something - to make a change - to get his physical self back in the saddle of health.

Initially, Ken began with one on-one-personal training to establish an improved strength base to benefit more from circuit training, which was the next step in his program. Once he achieved enough strength and conditioning, he was able to safely approach his sessions with higher intensity levels. Ken could realize the heart rate threshold 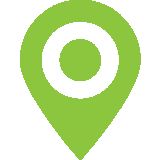 Gainesville Magazine is a full-size, glossy, local, lifestyle publication covering the good people, places and things to do in Gainesville,...

Gainesville Magazine is a full-size, glossy, local, lifestyle publication covering the good people, places and things to do in Gainesville,...