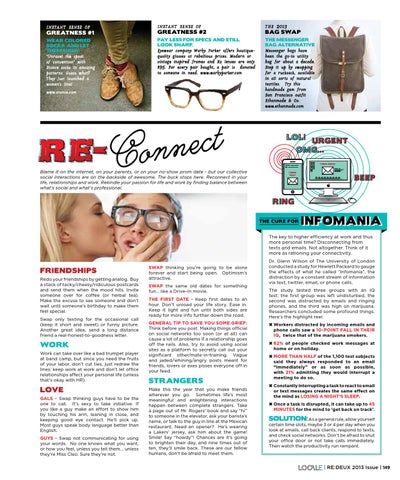 “Unravel the spool of convention” with Stance socks in amazing patterns. Guess what? They just launched a women’s line! www.stance.com

Eyewear company Warby Parker offers boutiquequality glasses at rebellious prices. Modern or vintage inspired frames and Rx lenses are only $95. For every pair bought, a pair is donated to someone in need. www.warbyparker.com

Messenger bags have been the go-to utility bag for about a decade. Step it up by swapping for a rucksack, available in all sorts of natural textiles. Try this handmade gem from San Francisco outfit Ethanmade &amp; Co. www.ethanmade.com

Blame it on the internet, on your parents, or on your no-show prom date - but our collective social interactions are on the backside of awesome. The buck stops here. Reconnect in your life, relationships and work. Rekindle your passion for life and work by finding balance between what’s social and what’s professional.

RING THE CURE FOR

The key to higher efficiency at work and thus more personal time? Disconnecting from texts and emails. Not altogether. Think of it more as rationing your connectivity.

FRIENDSHIPS Redo your friendships by getting analog. Buy a stack of tacky/cheesy/ridiculous postcards and send them when the mood hits. Invite someone over for coffee (or herbal tea). Make the excuse to see someone and don’t wait until someone’s birthday to make them feel special. Swap only texting for the occasional call (keep it short and sweet) or funny picture. Another great idea, send a long distance friend a real-honest-to-goodness letter.

WORK Work can take over like a bad trumpet player at band camp, but since you need the fruits of your labor, don’t cut ties, just redraw the lines: keep work at work and don’t let office relationships affect your personal life (unless that’s okay with HR).

LOVE GALS – Swap thinking guys have to be the one to call. It’s sexy to take initiative. If you like a guy make an effort to show him by touching his arm, leaning in close, and keeping good eye contact. He’ll pick up. Most guys speak body language better than English. GUYS – Swap not communicating for using your words. No one knows what you want, or how you feel, unless you tell them... unless they’re Miss Cleo. Sure they’re not.

SWAP thinking you’re going to be alone forever and start being open. Optimism’s attractive. SWAP the same old dates for something fun… like a Drive-In movie. THE FIRST DATE - Keep first dates to an hour. Don’t unload your life story. Ease in. Keep it light and fun until both sides are ready for more info further down the road. GENERAL TIP TO SAVE YOU SOME GRIEF: Think before you post. Making things official on social networks too soon (or at all) can cause a lot of problems if a relationship goes off the rails. Also, try to avoid using social sites as a platform to secretly call out your significant other/mate-in-training. Vague and jaded/whining/angry posts meant for friends, lovers or exes pisses everyone off in your feed.

STRANGERS Make this the year that you make friends wherever you go. Sometimes life’s most meaningful and enlightening interactions happen between complete strangers. Take a page out of Mr. Rogers’ book and say “hi” to someone in the elevator, ask your barista’s name, or talk to the guy in line at the Mexican restaurant. Need an opener? He’s wearing a Lakers’ jersey, ask him about the game! Smile! Say “howdy”! Chances are it’s going to brighten their day, and nine times out of ten, they’ll smile back. These are our fellow humans, don’t be afraid to meet them.

Dr. Glenn Wilson of The University of London conducted a study for Hewlett Packard to gauge the effects of what he called “Infomania”, the distraction by a constant stream of information via text, twitter, email, or phone calls. The study tested three groups with an IQ test: the first group was left undisturbed, the second was distracted by emails and ringing phones, and the third was high on marijuana. Researchers concluded some profound things. Here’s the highlight reel: ✖ Workers distracted by incoming emails and phone calls saw a 10-POINT FALL IN THEIR IQ, twice that of the marijuana smokers. ✖ 62% of people checked work messages at home or on holiday. ✖ MORE THAN HALF of the 1,100 test subjects said they always responded to an email “immediately” or as soon as possible, with 21% admitting they would interrupt a meeting to do so. ✖ Constantly interrupting a task to react to email or text messages creates the same effect on the mind as LOSING A NIGHT’S SLEEP. ✖ Once a task is disrupted, it can take up to 45 MINUTES for the mind to ‘get back on track’.

SOLUTION: As a general rule, allow yourself

certain time slots, maybe 3 or 4 per day when you look at emails, call back clients, respond to texts, and check social networks. Don’t be afraid to shut your office door or not take calls immediately. Then watch the productivity run rampant. 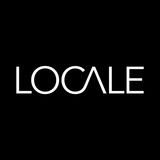