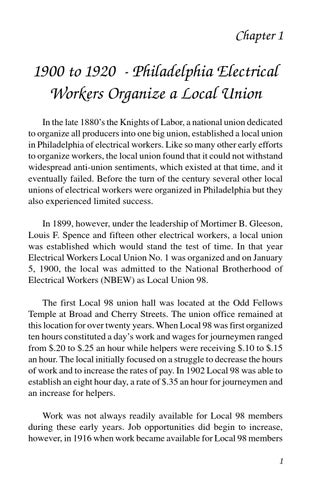 1900 to 1920 - Philadelphia Electrical Workers Organize a Local Union In the late 1880â&amp;#x20AC;&amp;#x2122;s the Knights of Labor, a national union dedicated to organize all producers into one big union, established a local union in Philadelphia of electrical workers. Like so many other early efforts to organize workers, the local union found that it could not withstand widespread anti-union sentiments, which existed at that time, and it eventually failed. Before the turn of the century several other local unions of electrical workers were organized in Philadelphia but they also experienced limited success. In 1899, however, under the leadership of Mortimer B. Gleeson, Louis F. Spence and fifteen other electrical workers, a local union was established which would stand the test of time. In that year Electrical Workers Local Union No. 1 was organized and on January 5, 1900, the local was admitted to the National Brotherhood of Electrical Workers (NBEW) as Local Union 98. The first Local 98 union hall was located at the Odd Fellows Temple at Broad and Cherry Streets. The union office remained at this location for over twenty years. When Local 98 was first organized ten hours constituted a dayâ&amp;#x20AC;&amp;#x2122;s work and wages for journeymen ranged from $.20 to $.25 an hour while helpers were receiving $.10 to $.15 an hour. The local initially focused on a struggle to decrease the hours of work and to increase the rates of pay. In 1902 Local 98 was able to establish an eight hour day, a rate of $.35 an hour for journeymen and an increase for helpers. Work was not always readily available for Local 98 members during these early years. Job opportunities did begin to increase, however, in 1916 when work became available for Local 98 members

Here you can learn more about our 100 year-plus history, our mission, our leadership, the unmatched training we provide our members, our signature projects, and our commitment to the people of the City of Philadelphia. 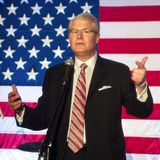