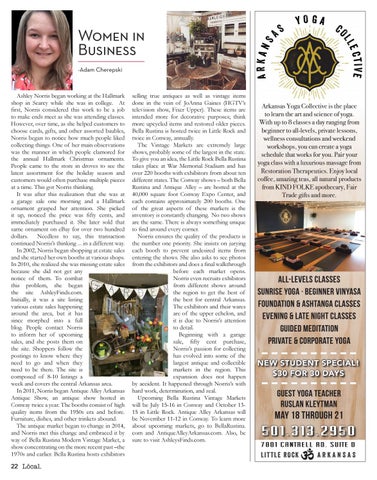 Ashley Norris began working at the Hallmark shop in Searcy while she was in college. At first, Norris considered this work to be a job to make ends meet as she was attending classes. However, over time, as she helped customers to choose cards, gifts, and other assorted baubles, Norris began to notice how much people liked collecting things. One of her main observations was the manner in which people clamored for the annual Hallmark Christmas ornaments. People came to the store in droves to see the latest assortment for the holiday season and customers would often purchase multiple pieces at a time. This got Norris thinking. It was after this realization that she was at a garage sale one morning and a Hallmark ornament grasped her attention. She picked it up, noticed the price was fifty cents, and immediately purchased it. She later sold that same ornament on eBay for over two hundred dollars. Needless to say, this transaction continued Norris’s thinking ... in a different way. In 2002, Norris began shopping at estate sales and she started her own booths at various shops. In 2010, she realized she was missing estate sales because she did not get any notice of them. To combat this problem, she began the site AshleyFinds.com. Initially, it was a site listing various estate sales happening around the area, but it has since morphed into a full blog. People contact Norris to inform her of upcoming sales, and she posts them on the site. Shoppers follow the postings to know where they need to go and when they need to be there. The site is composed of 8-10 listings a week and covers the central Arkansas area. In 2011, Norris began Antique Alley Arkansas Antique Show, an antique show hosted in Conway twice a year. The booths consist of high quality items from the 1950s era and before. Furniture, dishes, and other trinkets abound. The antique market began to change in 2014, and Norris met this change and embraced it by way of Bella Rustina Modern Vintage Market, a show concentrating on the more recent past –the 1970s and earlier. Bella Rustina hosts exhibitors 22

selling true antiques as well as vintage items done in the vein of JoAnna Gaines (HGTV’s television show, Fixer Upper). These items are intended more for decorative purposes; think more upcycled items and restored older pieces. Bella Rustina is hosted twice in Little Rock and twice in Conway, annually. The Vintage Markets are extremely large shows, probably some of the largest in the state. To give you an idea, the Little Rock Bella Rustina takes place at War Memorial Stadium and has over 220 booths with exhibitors from about ten different states. The Conway shows – both Bella Rustina and Antique Alley – are hosted at the 40,000 square foot Conway Expo Center, and each contains approximately 200 booths. One of the great aspects of these markets is the inventory is constantly changing. No two shows are the same. There is always something unique to find around every corner. Norris ensures the quality of the products is the number one priority. She insists on jurying each booth to prevent undesired items from entering the shows. She also asks to see photos from the exhibitors and does a final walkthrough before each market opens. Norris even recruits exhibitors from different shows around the region to get the best of the best for central Arkansas. The exhibitors and their wares are of the upper echelon, and it is due to Norris’s attention to detail. Beginning with a garage sale, fifty cent purchase, Norris’s passion for collecting has evolved into some of the largest antique and collectible markets in the region. This expansion does not happen by accident. It happened through Norris’s with hard work, determination, and zeal. Upcoming Bella Rustina Vintage Markets will be July 15-16 in Conway and October 1315 in Little Rock. Antique Alley Arkansas will be November 11-12 in Conway. To learn more about upcoming markets, go to BellaRustina. com and AntiqueAlleyArkansas.com. Also, be sure to visit AshleysFinds.com.

Arkansas Yoga Collective is the place to learn the art and science of yoga. With up to 8 classes a day ranging from beginner to all-levels, private lessons, wellness consultations and weekend workshops, you can create a yoga schedule that works for you. Pair your yoga class with a luxurious massage from Restoration Therapeutics. Enjoy local coffee, amazing teas, all natural products from KIND FOLKE apothecary, Fair Trade gifts and more. 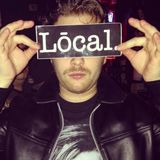