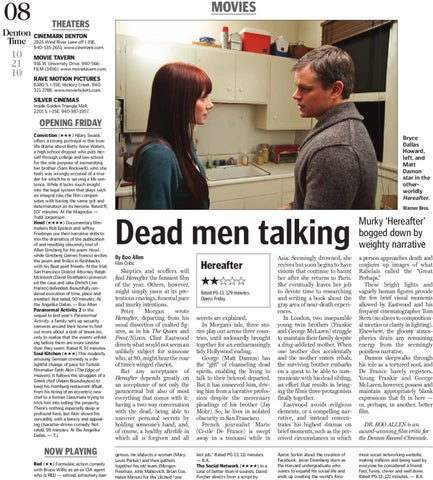 OPENING FRIDAY Conviction (###) Hilary Swank offers a strong portrayal in this truelife drama about Betty Anne Waters, a high school dropout who puts herself through college and law school for the sole purpose of exonerating her brother (Sam Rockwell), who she feels was wrongly accused of a murder for which he is serving a life sentence. While it lacks much insight into the legal system that plays such an integral role, the film compensates with having the same grit and determination as its heroine. Rated R, 107 minutes. At the Magnolia. — Todd Jorgenson Howl (####) Documentary filmmakers Rob Epstein and Jeffrey Friedman use their narrative skills to mix the dramatics of the publication of and resulting obscenity trial of Allen Ginsberg for his poem Howl, while Ginsberg (James Franco) recites the poem and frolics in flashbacks with his Beat poet friends. At the trial, San Francisco District Attorney Ralph McIntosh (David Strathairn) prosecuted the case and Jake Ehrlich (Jon Hamm) defended. Beautifully rendered evocation of time, place and mindset. Not rated, 90 minutes. At the Angelika Dallas. — Boo Allen Paranormal Activity 2 In the sequel to last year’s Paranormal Activity, a family sets up security cameras around their home to find out more about a rash of break-ins, only to realize that the events unfolding before them are more sinister than they seem. Rated R, 91 minutes. Soul Kitchen (###) This modestly amusing German comedy is a delightful change of pace for Turkish filmmaker Fatih Akin (The Edge of Heaven). It follows the struggles of a Greek chef (Adam Bousdoukos) to keep his Hamburg restaurant afloat, from his hiring of an eccentric new chef to a former classmate trying to trick him into selling the property. There’s nothing especially deep or profound here, but Akin shows his versatility with a breezy and appealing character-driven comedy. Not rated, 99 minutes. At the Angelika Dallas. — T.J.

a person approaches death and conjures up images of what Rabelais called the “Great Perhaps.” These bright lights and vaguely human figures provide the few brief visual moments allowed by Eastwood and his frequent cinematographer Tom Stern (no slaves to compositional niceties or clarity in lighting). Elsewhere, the gloomy atmospherics drain any remaining energy from the seemingly pointless narrative. Damon sleepwalks through his role as a tortured soul, and De France barely registers. Young Frankie and George McLaren, however, possess and maintain appropriately blank expressions that fit in here — or, perhaps, in another, better film.

most social networking website, making millions and being sued by everyone he considered a friend. Fast, funny, clever and well done. Rated PG-13, 121 minutes. — B.A.

Skeptics and scoffers will find Hereafter the funniest film of the year. Others, however, might simply yawn at its pretentious cravings, funereal pace and murky intentions. Peter Morgan wrote Hereafter, departing from his usual dissection of exalted figures, as in his The Queen and Frost/Nixon. Clint Eastwood directs what would not seem an unlikely subject for someone who, at 80, might hear the roar of time’s winged chariot. But any acceptance of Hereafter depends greatly on an acceptance of not only the paranormal but also of most everything that comes with it: having a two-way conversation with the dead, being able to uncover personal secrets by holding someone’s hand, and, of course, a healthy afterlife in which all is forgiven and all

secrets are explained. In Morgan’s tale, three stories play out across three countries, until awkwardly brought together for an embarrassingly tidy Hollywood ending. George (Matt Damon) has the “gift” of channeling dead spirits, enabling the living to talk to their beloved departed. But it has unnerved him, driving him from a lucrative profession despite the mercenary pleadings of his brother (Jay Mohr). So, he lives in isolated obscurity in San Francisco. French journalist Marie (Cecile De France) is swept away in a tsunami while in

Asia. Seemingly drowned, she revives but soon begins to have visions that continue to haunt her after she returns to Paris. She eventually leaves her job to devote time to researching and writing a book about the gray area of near-death experiences. In London, two inseparable young twin brothers (Frankie and George McLaren) struggle to maintain their family despite a drug-addicted mother. When one brother dies accidentally and the mother enters rehab, the surviving brother embarks on a quest to be able to communicate with his dead sibling, an effort that results in bringing the film’s three protagonists finally together. Eastwood avoids religious elements, or a compelling narrative, and instead concentrates his highest dramas on brief moments, such as the perceived circumstances in which

gerous. He abducts a woman (MaryLouis Parker) and then gathers together his old team (Morgan Freeman, John Malkovich, Brian Cox, Helen Mirren) for the cliched “one

Aaron Sorkin about the creation of Facebook. Jesse Eisenberg stars as the Harvard undergraduate who wants to expand his social life and ends up creating the world’s fore-

DR. BOO ALLEN is an award-winning film critic for the Denton Record-Chronicle.