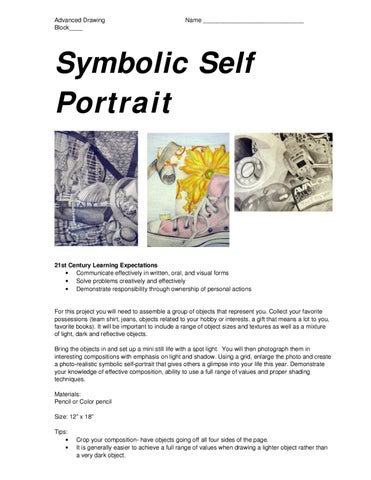 21st Century Learning Expectations • Communicate effectively in written, oral, and visual forms • Solve problems creatively and effectively • Demonstrate responsibility through ownership of personal actions For this project you will need to assemble a group of objects that represent you. Collect your favorite possessions (team shirt, jeans, objects related to your hobby or interests, a gift that means a lot to you, favorite books). It will be important to include a range of object sizes and textures as well as a mixture of light, dark and reflective objects. Bring the objects in and set up a mini still life with a spot light. You will then photograph them in interesting compositions with emphasis on light and shadow. Using a grid, enlarge the photo and create a photo­realistic symbolic self­portrait that gives others a glimpse into your life this year. Demonstrate your knowledge of effective composition, ability to use a full range of values and proper shading techniques. Materials: Pencil or Color pencil Size: 12” x 18” Tips: • •

Crop your composition­ have objects going off all four sides of the page. It is generally easier to achieve a full range of values when drawing a lighter object rather than a very dark object.

Do not out line the objects (this will make them appear flat instead of three­dimensional).

Shade each object according to the direction of the form (i.e. follow the curves of a round object)

Block___ This is your chance to reflect upon your process and finished product. In each of the categories, circle one box that you feel most accurately matches the amount of work you did for this project. Category

Student made an effective design. Showed an awareness of filling the space adequately.

Did the assignment adequately, yet it shows lack of planning.

Made decisions after referring to one source; solved the problem in a logical way.

Tried one idea, and carried it out adequately, but it lacked originality.

The project was continued until it was as complete as the student could make it; took pride in going well beyond the requirement. The artwork was beautifully and patiently done; it was good as hard work could make it. Followed through on commitments, was sensitive to the feelings of others, willingly participated in necessary work. ALWAYS respectful. Exemplary Outstanding

Worked hard and completed the project, but with a little more effort it might have been outstanding.

Use of Sybolism Interestring cropped composition Quality of shading (follows the form of the objects, no outlines etc)

Assignment was completed and turned in, but showed little evidence of design or planning. Fulfilled the assignment, but gave no evidence of trying anything unusual.

Did the minimum or the artwork was never completed.

Project was finished, but it could have been improved with more effort; chose an easy project and did it indifferently.

The project was completed with minimum effort.

Did not finish the work adequately. The student did not put in enough effort.

With a little more effort, the work could have been outstanding; lacks the finishing touches.

Average craftsmanship; adequate, but not as good as it could have been; a bit careless.

Poor craftsmanship; evidence of laziness or total lack of understanding.

Did his or her share of work adequately, assisted in preparation and cleanup when asked. Not always on task.

Allowed others to do most of the work, did participate minimally, did the minimum amount. Was spoken to by the teacher.

Poor attitude. Was spoken to multiple times by the teacher or written up. Often disrespectful.

Explain the symbolism of each of your objects.

How well do you feel the finished piece represents your life today?

What is the most successful part of your project?

If you had to do this project again, what would you do differently next time?

Showed no evidence of original thought.

Symbolic Self Portrait Handout and Rubric

Symbolic Self Portrait Handout and Rubric