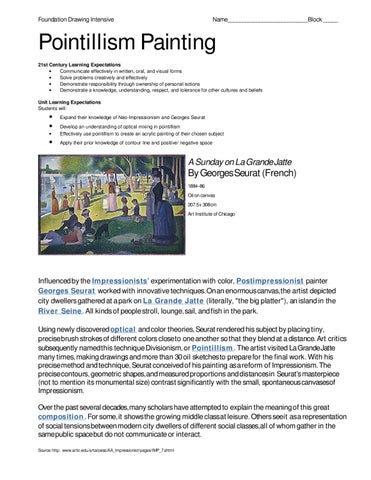 Expand their knowledge of Neo­Impressionism and Georges Seurat

Apply their prior knowledge of contour line and positive/ negative space

A Sunday on La Grande Jatte

Influenced by the Impressionists’ experimentation with color, Postimpressionist painter Georges Seurat worked with innovative techniques. On an enormous canvas, the artist depicted city dwellers gathered at a park on La Grande Jatte (literally, "the big platter"), an island in the River Seine . All kinds of people stroll, lounge, sail, and fish in the park. Using newly discovered optical and color theories, Seurat rendered his subject by placing tiny, precise brush strokes of different colors close to one another so that they blend at a distance. Art critics subsequently named this technique Divisionism, or Pointillism . The artist visited La Grande Jatte many times, making drawings and more than 30 oil sketches to prepare for the final work. With his precise method and technique, Seurat conceived of his painting as a reform of Impressionism. The precise contours, geometric shapes, and measured proportions and distancesin Seurat’s masterpiece (not to mention its monumental size) contrast significantly with the small, spontaneous canvasesof Impressionism. Over the past several decades,many scholars have attempted to explain the meaning of this great composition . For some, it shows the growing middle class at leisure. Others see it as a representation of social tensions between modern city dwellers of different social classes,all of whom gather in the same public spacebut do not communicate or interact. Source: http: www.artic.edu/artaccess/AA_Impressionist/pages/IMP_7.shtml

In the 8” square below, make a contour line drawing of your subject. Be sure to zoom in on your  subject. Also consider putting the subject off center (doing this helps to break up the negative space into  interesting and varied shapes).

Optical color mixing is created through our perception of color. When one looks at two small amounts of different  colors laid down side by side the two appear to create a different color. This color is usually something similar to the  result when the two are mixed in pigment. The only difference is that when two colors are mixed in pigment, they  lose some of their intensity. When two colors mix optically, they retain their intensity and they sometimes appear  brighter. This type of color mixing was practiced by the Impressionists and Post­Impressionists. The best example is work by  the Pointillists (Georges Seurat being the most recognizable) who laid down small dots of different colors and  allowed the viewer to optically mix them. A similar example of this process occurs in color newspaper photos. If you look at a color newspaper photograph  using a magnifying glass, you will see not a solid color, but small dots which, when optically mixed, create other  colors. Although this process is subtractive and the Impressionists worked additively, the visual effect is largely the  same. (Source: http://studiochalkboard.evansville.edu/c­optics.html)

Practice painting in the pointillist style before starting your final painting on canvas.  Remember to try out optical mixing: