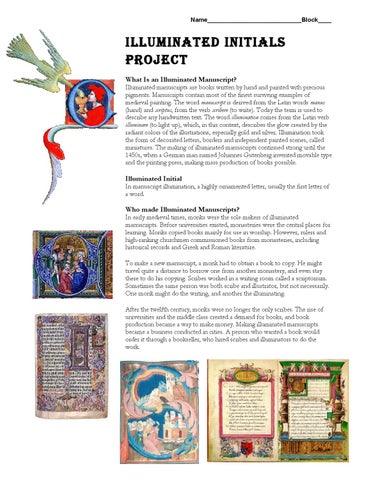 IllumInated InItIals PROJeCt What Is an Illuminated Manuscript?

Illuminated manuscripts are books written by hand and painted with precious pigments. Manuscripts contain most of the finest surviving examples of medieval painting. The word manuscript is derived from the Latin words manus (hand) and scriptus, from the verb scribere (to write). Today the term is used to describe any handwritten text. The word illumination comes from the Latin verb illuminare (to light up), which, in this context, describes the glow created by the radiant colors of the illustrations, especially gold and silver. Illumination took the form of decorated letters, borders and independent painted scenes, called miniatures. The making of illuminated manuscripts continued strong until the 1450s, when a German man named Johannes Gutenberg invented movable type and the printing press, making mass production of books possible.

In manuscript illumination, a highly ornamented letter, usually the first letter of a word.

Who made Illuminated Manuscripts?

In early medieval times, monks were the sole makers of illuminated manuscripts. Before universities existed, monasteries were the central places for learning. Monks copied books mainly for use in worship. However, rulers and high-ranking churchmen commissioned books from monasteries, including historical records and Greek and Roman literature. To make a new manuscript, a monk had to obtain a book to copy. He might travel quite a distance to borrow one from another monastery, and even stay there to do his copying. Scribes worked in a writing room called a scriptorium. Sometimes the same person was both scribe and illustrator, but not necessarily. One monk might do the writing, and another the illuminating. After the twelfth century, monks were no longer the only scribes. The rise of universities and the middle class created a demand for books, and book production became a way to make money. Making illuminated manuscripts became a business conducted in cities. A person who wanted a book would order it through a bookseller, who hired scribes and illuminators to do the work.

Your assignment: Invent a creative illumination of your own initials (one or both). You will need to do a minimum of four thumbnail sketches that try out different ideas and a 9” x 12” enlargement of your best design before starting your final. Your final illumination will be on 9” x12” paper and should include:

1. Your Name Initial - Initials were enlarged decorated letters that were often found at the beginning of a section of text to introduce it. Think of an unusual way to depict your initials.

3 Symbols - Miniatures were stand-alone illustrations that were not part of a scheme or initial. These should symbolize things about you. You will need a minimum of three symbols. Avoid doing the obvious. Think of creative ways to draw your symbols that no one else in the class will have.

3. Border - a group of images and illustrations that decorated the edges of a page. Historically hey were often filled with plants, animals, etc…Your border should relate to the rest of your illumination. It can be a traditional border or untraditional.

4. A Color Harmony- Your design will be outlined in thin black marker and filled with color. Choose one of the following color harmonies for your painting: •

Analagous- Any four colors that are directly next to each other on the color wheel (ex: red-orange, orange, yellow-orange, yellow)

This is your chance to reflect upon your process and finished product. In each of the categories, circle one box that you feel most accurately matches the amount of work you did for this project. Category

Student made an effective design. Showed an awareness of filling the space adequately.

Did the assignment adequately, yet it shows lack of planning.

Made decisions after referring to one source; solved the problem in a logical way.

Tried one idea, and carried it out adequately, but it lacked originality.

The project was continued until it was as complete as the student could make it; took pride in going well beyond the requirement. The artwork was beautifully and patiently done; it was good as hard work could make it.

Worked hard and completed the project, but with a little more effort it might have been outstanding.

Project was finished, but it could have been improved with more effort; chose an easy project and did it indifferently.

With a little more effort, the work could have been outstanding; lacks the finishing touches.

Average craftsmanship; adequate, but not as good as it could have been; a bit careless.

Followed through on commitments, was sensitive to the feelings of others, willingly participated in necessary work. ALWAYS respectful.

Did his or her share of work adequately, assisted in preparation and cleanup when asked. Not always on task.

Assignment was completed and turned in, but showed little evidence of design or planning.

Did the minimum or the artwork was never completed.

Fulfilled the assignment, but gave no evidence of trying anything unusual.

Showed no evidence of original thought.

The project was completed with minimum effort.

Did not finish the work adequately. The student did not put in enough effort.

Poor craftsmanship; evidence of laziness or total lack of understanding. Poor attitude. Was spoken to multiple times by the teacher or written up. Often disrespectful. Unsatisfactory /Poor

Correct use of Color Harmony

Allowed others to do most of the work, did participate minimally, did the minimum amount. Was spoken to by the teacher. Beginning Below Average

Quality of pencil shading/ smoothness Use of unusual/ creative personal symbols â&#x20AC;&#x201C; Use of creative border

What grade you would give yourself for this project?___________ What are the reasons for that grade?