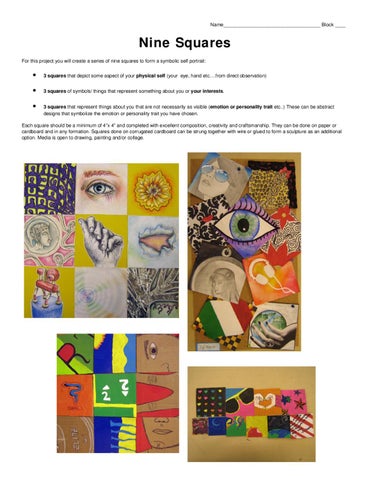 Nine Squares For this project you will create a series of nine squares to form a symbolic self portrait:

3 squares that depict some aspect of your physical self (your  eye, hand etc….from direct observation)

3 squares of symbols/ things that represent something about you or your interests.

Each square should be a minimum of 4”x 4” and completed with excellent composition, creativity and craftsmanship. They can be done on paper or  cardboard and in any formation. Squares done on corrugated cardboard can be strung together with wire or glued to form a sculpture as an additional  option. Media is open to drawing, painting and/or collage.

Sketch some ideas using a viewfinder for interesting and unusual views, angles and zooms. How can you make your  squares visually interesting and different than anyone else’s in the class?

This is your chance to reflect upon your process and finished product. In each of the five rows, please circle one  box that you feel most accurately matches the amount of work you did for this project.

B Very Good Above Average Student made an  effective design.  Showed an awareness  of filling the space  adequately. The student made  decisions after referring  to one source; solved  the problem in a logical  way.

The assignment was  completed and turned  in, but showed little  evidence of design or  planning. The student fulfilled  the assignment, but  gave no evidence of  trying anything  unusual.

F Unsatisfactory /Poor The student did the  minimum or the  artwork was never  completed.

The project was continued  until it was as complete as  the student could make it;  gave effort far beyond that  required; took pride in  going well beyond the  requirement. The artwork was beautifully  and patiently done; it was  good as hard work could  make it.

The student worked  hard and completed the  project, but with a little  more effort it might have  been outstanding.

Project was finished,  but it could have been  improved with more  effort; chose an easy  project and did it  indifferently.

The project was  completed with  minimum effort.

With a little more effort,  the work could have  been outstanding; lacks  the finishing touches.

The student showed  average  craftsmanship;  adequate, but not as  good as it could have  been; a bit careless.

The student followed  through on commitments,  was sensitive to the  feelings and knowledge  level of others, willingly  participated in necessary  work.

The student participated  enthusiastically, followed  through on  commitments,  performed more than  adequately, assisted in  prep and cleanup.

The student did his or  her share of work  adequately, assisted  in preparation and  cleanup when asked.

The student allowed  others to do most of  the work, did  participate minimally,  did the minimum  amount.

The student  showed poor  craftsmanship;  evidence of  laziness or total  lack of  understanding. The student did a  minimal amount of  preparation and  cleanup. The  student had a poor  attitude.

How well do you feel you drew the three squares that were self portraits from observation?

What is the symbolism of the 3 objects that you chose to represent you?

How well do you feel you did the 3 abstract squares? What is their symbolism?

How did you choose to connect the 9 squares for display? Do you feel you presented your project in an interesting/ creative way? What do you think the most successful part of your work is? If you were to do this project again, what would you do differently next time? What letter grade do you feel you have earned for this project?  _____ Explain why you chose that grade:

The student  showed no  evidence of original  thought.