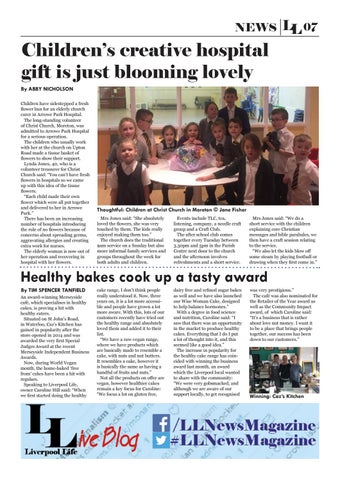 By ABBY NICHOLSON Children have sidestepped a fresh flower ban for an elderly church carer in Arrowe Park Hospital. The long-standing volunteer of Christ Church, Moreton, was admitted to Arrowe Park Hospital for a serious operation. The children who usually work with her at the church on Upton Road made a tissue basket of flowers to show their support. Lynda Jones, 40, who is a volunteer treasurer for Christ Church said: “You can’t have fresh flowers in hospitals so we came up with this idea of the tissue flowers. “Each child made their own flower which were all put together and delivered to her in Arrowe Park.” There has been an increasing number of hospitals introducing the rule of no flowers because of concerns about spreading germs, aggravating allergies and creating extra work for nurses. The elderly woman is now out of her operation and recovering in hospital with her flowers.

Thoughtful: Children at Christ Church in Moreton © Jane Fisher Mrs Jones said: “She absolutely loved the flowers, she was very touched by them. The kids really enjoyed making them too.” The church does the traditional 9am service on a Sunday but also more informal family services and groups throughout the week for both adults and children.

Events include TLC, tea, listening, company, a needle craft group and a Craft Club. The after school club comes together every Tuesday between 3.30pm and 5pm in the Parish Centre next door to the church and the afternoon involves refreshments and a short service.

Mrs Jones said: “We do a short service with the children explaining core Christian messages and bible parabales, we then have a craft session relating to the service. “We also let the kids blow off some steam by playing football or drawing when they first come in.”

Healthy bakes cook up a tasty award By TIM SPENCER TANFIELD An award-winning Merseyside café, which specialises in healthy cakes, is proving a hit with healthy eaters. Situated on St John’s Road, in Waterloo, Caz’s Kitchen has gained in popularity after the store opened in 2014 and was awarded the very first Special Judges Award at the recent Merseyside Independent Business Awards. Now, during World Vegan month, the home-baked ‘free from’ cakes have been a hit with regulars. Speaking to Liverpool Life, owner Caroline Hill said: “When we first started doing the healthy

cake range, I don’t think people really understood it. Now, three years on, it is a lot more accessible and people have grown a lot more aware. With this, lots of our customers recently have tried out the healthy range and absolutely loved them and added it to their list. “We have a raw-vegan range, where we have products which are basically made to resemble a cake, with nuts and nut butters. It resembles a cake, however it is basically the same as having a handful of fruits and nuts.” Not all the products on offer are vegan, however healthier cakes remain a key focus for Caroline: “We focus a lot on gluten free,

dairy free and refined sugar bakes as well and we have also launched our Wise Woman Cake, designed to help balance hormones.” With a degree in food science and nutrition, Caroline said: “I saw that there was an opportunity in the market to produce healthy cakes. Everything that I do I put a lot of thought into it, and this seemed like a good idea.” The increase in popularity for the healthy cake range has coincided with winning the business award last month, an award which the Liverpool local wanted to share with the community: “We were very gobsmacked, and although we are aware of our support locally, to get recognised

was very prestigious.” The café was also nominated for the Retailer of the Year award as well as the Community Impact award, of which Caroline said: “It’s a business that is rather about love not money. I want it to be a place that brings people together, our success has been down to our customers.” 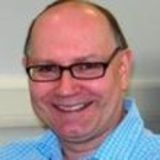 Liverpool Life is a fortnightly news magazine produced by final year undergraduate students on the Journalism and International Journalism p...

Liverpool Life is a fortnightly news magazine produced by final year undergraduate students on the Journalism and International Journalism p...