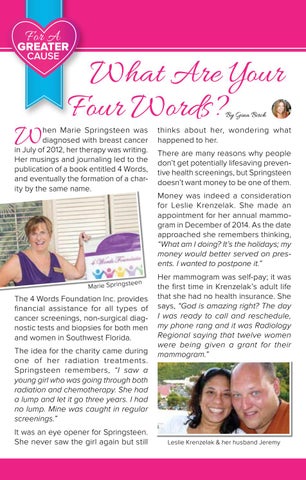 What Are Your Four Words ? By Gina Birch

hen Marie Springsteen was diagnosed with breast cancer in July of 2012, her therapy was writing. Her musings and journaling led to the publication of a book entitled 4 Words, and eventually the formation of a charity by the same name.

The 4 Words Foundation Inc. provides financial assistance for all types of cancer screenings, non-surgical diagnostic tests and biopsies for both men and women in Southwest Florida. The idea for the charity came during one of her radiation treatments. Springsteen remembers, “I saw a young girl who was going through both radiation and chemotherapy. She had a lump and let it go three years. I had no lump. Mine was caught in regular screenings.” It was an eye opener for Springsteen. She never saw the girl again but still livinglocalfl.com | NOVEMBER 2017

thinks about her, wondering what happened to her. There are many reasons why people don’t get potentially lifesaving preventive health screenings, but Springsteen doesn’t want money to be one of them. Money was indeed a consideration for Leslie Krenzelak. She made an appointment for her annual mammogram in December of 2014. As the date approached she remembers thinking, “What am I doing? It’s the holidays; my money would better served on presents. I wanted to postpone it.” Her mammogram was self-pay; it was the first time in Krenzelak’s adult life that she had no health insurance. She says, “God is amazing right? The day I was ready to call and reschedule, my phone rang and it was Radiology Regional saying that twelve women were being given a grant for their mammogram.” 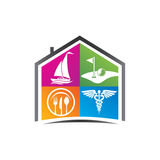