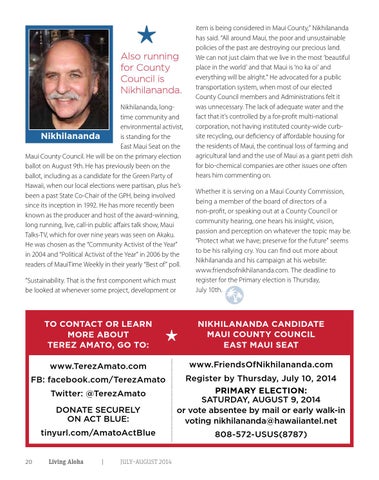 Also running for County Council is Nikhilananda. Nikhilananda, longtime community and environmental activist, Nikhilananda is standing for the East Maui Seat on the Maui County Council. He will be on the primary election ballot on August 9th. He has previously been on the ballot, including as a candidate for the Green Party of Hawaii, when our local elections were partisan, plus he’s been a past State Co-Chair of the GPH, being involved since its inception in 1992. He has more recently been known as the producer and host of the award-winning, long running, live, call-in public affairs talk show, Maui Talks-TV, which for over nine years was seen on Akaku. He was chosen as the “Community Activist of the Year” in 2004 and “Political Activist of the Year” in 2006 by the readers of MauiTime Weekly in their yearly “Best of” poll. “Sustainability. That is the first component which must be looked at whenever some project, development or

item is being considered in Maui County,” Nikhilananda has said. “All around Maui, the poor and unsustainable policies of the past are destroying our precious land. We can not just claim that we live in the most ‘beautiful place in the world’ and that Maui is ‘no ka oi’ and everything will be alright.” He advocated for a public transportation system, when most of our elected County Council members and Administrations felt it was unnecessary. The lack of adequate water and the fact that it’s controlled by a for-profit multi-national corporation, not having instituted county-wide curbsite recycling, our deficiency of affordable housing for the residents of Maui, the continual loss of farming and agricultural land and the use of Maui as a giant petri dish for bio-chemical companies are other issues one often hears him commenting on. Whether it is serving on a Maui County Commission, being a member of the board of directors of a non-profit, or speaking out at a County Council or community hearing, one hears his insight, vision, passion and perception on whatever the topic may be. “Protect what we have; preserve for the future” seems to be his rallying cry. You can find out more about Nikhilananda and his campaign at his website: www.friendsofnikhilananda.com. The deadline to register for the Primary election is Thursday, July 10th.

To Contact or Learn more about Terez Amato, go to:

Hawaii's Magazine for a Health Conscious Community and Planet