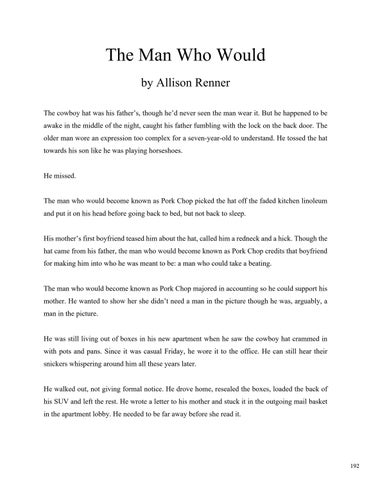 The Man Who Would by Allison Renner The cowboy hat was his father’s, though he’d never seen the man wear it. But he happened to be awake in the middle of the night, caught his father fumbling with the lock on the back door. The older man wore an expression too complex for a seven-year-old to understand. He tossed the hat towards his son like he was playing horseshoes. He missed. The man who would become known as Pork Chop picked the hat off the faded kitchen linoleum and put it on his head before going back to bed, but not back to sleep. His mother’s first boyfriend teased him about the hat, called him a redneck and a hick. Though the hat came from his father, the man who would become known as Pork Chop credits that boyfriend for making him into who he was meant to be: a man who could take a beating. The man who would become known as Pork Chop majored in accounting so he could support his mother. He wanted to show her she didn’t need a man in the picture though he was, arguably, a man in the picture. He was still living out of boxes in his new apartment when he saw the cowboy hat crammed in with pots and pans. Since it was casual Friday, he wore it to the office. He can still hear their snickers whispering around him all these years later. He walked out, not giving formal notice. He drove home, resealed the boxes, loaded the back of his SUV and left the rest. He wrote a letter to his mother and stuck it in the outgoing mail basket in the apartment lobby. He needed to be far away before she read it. 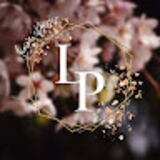