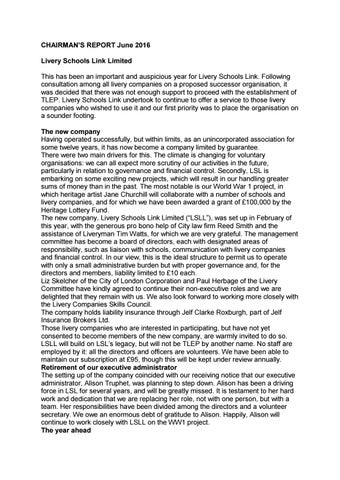 CHAIRMAN’S REPORT June 2016 Livery Schools Link Limited This has been an important and auspicious year for Livery Schools Link. Following consultation among all livery companies on a proposed successor organisation, it was decided that there was not enough support to proceed with the establishment of TLEP. Livery Schools Link undertook to continue to offer a service to those livery companies who wished to use it and our first priority was to place the organisation on a sounder footing. The new company Having operated successfully, but within limits, as an unincorporated association for some twelve years, it has now become a company limited by guarantee. There were two main drivers for this. The climate is changing for voluntary organisations: we can all expect more scrutiny of our activities in the future, particularly in relation to governance and financial control. Secondly, LSL is embarking on some exciting new projects, which will result in our handling greater sums of money than in the past. The most notable is our World War 1 project, in which heritage artist Jane Churchill will collaborate with a number of schools and livery companies, and for which we have been awarded a grant of £100,000 by the Heritage Lottery Fund. The new company, Livery Schools Link Limited (“LSLL”), was set up in February of this year, with the generous pro bono help of City law firm Reed Smith and the assistance of Liveryman Tim Watts, for which we are very grateful. The management committee has become a board of directors, each with designated areas of responsibility, such as liaison with schools, communication with livery companies and financial control. In our view, this is the ideal structure to permit us to operate with only a small administrative burden but with proper governance and, for the directors and members, liability limited to £10 each. Liz Skelcher of the City of London Corporation and Paul Herbage of the Livery Committee have kindly agreed to continue their non-executive roles and we are delighted that they remain with us. We also look forward to working more closely with the Livery Companies Skills Council. The company holds liability insurance through Jelf Clarke Roxburgh, part of Jelf Insurance Brokers Ltd. Those livery companies who are interested in participating, but have not yet consented to become members of the new company, are warmly invited to do so. LSLL will build on LSL’s legacy, but will not be TLEP by another name. No staff are employed by it: all the directors and officers are volunteers. We have been able to maintain our subscription at £95, though this will be kept under review annually. Retirement of our executive administrator The setting up of the company coincided with our receiving notice that our executive administrator, Alison Truphet, was planning to step down. Alison has been a driving force in LSL for several years, and will be greatly missed. It is testament to her hard work and dedication that we are replacing her role, not with one person, but with a team. Her responsibilities have been divided among the directors and a volunteer secretary. We owe an enormous debt of gratitude to Alison. Happily, Alison will continue to work closely with LSLL on the WW1 project. The year ahead

In addition to the WW1 project, the next year will see not only the return of our two major annual events, but also a project to extend our reach and efficiency. The Showcase Careers Fair has grown year by year and now attracts a huge amount of interest from both schools and livery companies. In 2016, for the first time, it took place in the Guildhall, thanks to the support of (among others) the City of London Corporation and Sherriff Andrew Parmley. By the time of our AGM, our third Education Conference for head teachers and livery companies will have taken place on the same day. This is an opportunity to air important issues of policy and principle, and to review progress by reference to last year’s action list. The Livery Academy Awards were inaugurated in 2013 by the Worshipful Company of Grocers and are run by Wendy Turner. We are delighted that Wendy will now be liaising with LSLL on this. With the help of the Worshipful Company of Information Technologists and in particular one of our directors, David Barker, we have now completed the initial development of our new website and online volunteering platform. There will now be a trial, with a view to finalising the platform and offering it more widely later in the year. Retirements At this year’s AGM, John Towell and Rick Thomas of the Honourable Company of Air Pilots will be retiring from LSLL. John and Rick have been enthusiastic members of the committee of LSL and latterly the board of LSLL, and they have given generously of their time and experience. On behalf of LSLL and in my personal capacity, I would like to thank them very much. At the AGM in June, I will reach the end of my two-year term as Chairman. Because of work commitments, I have reluctantly decided also to retire as a director of LSLL, but I will be delighted to continue to help out if I can, on an informal basis. It has been a pleasure and privilege to collaborate with the board, with Alison, and with all those in livery companies, in COLC and in education, who have shown such commitment to the welfare and future of young people. I am delighted that Lis Goodwin has been nominated to take over the chair. Lis’s experience, good judgment and organisational skills will help LSLL to go from strength to strength. David Steward, June 2016