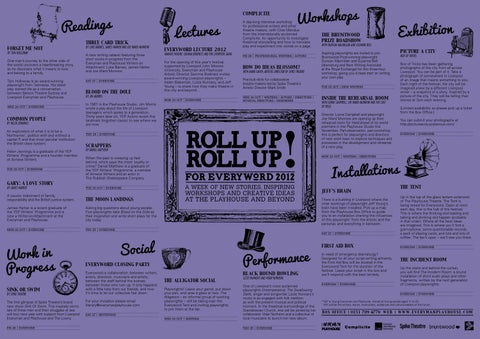 Readings FORGET ME NOT By Tom Holloway

One man’s journey to the other side of the world uncovers a heartbreaking story, as he discovers what it means to love and belong to a family. Tom Holloway is an award-winning playwright from Tasmania. His latest play started life as a conversation between Belvoir Theatre Sydney and Liverpool Everyman and Playhouse. WED 24 OCT | EVERYONE

An exploration of what it is to be a ‘Northerner’, politics with and without a capital P, and that most peculiar institution: the British class system. Helen Jennings is a graduate of the YEP Writers’ Programme and a founder member of Annexe Writers. TUE 23 OCT | EVERYONE

Blood on the Dole by Jim Morris

When the past is creeping up fast behind, which pays the most: loyalty or crime? Daniel Matthew is a graduate of the YEP Writers’ Programme, a member of Annexe Writers and an actor in The Rubbish Shakespeare Company.

A caustic indictment of family, responsibility and the British justice system.

James Harker is a recent graduate of the YEP Writers’ Programme and is now a Writer-on-Attachment at the Everyman and Playhouse.

Asking big questions about young people. Five playwrights take Blood on the Dole as their inspiration and write short plays for the city today.

The first glimpse of Spike Theatre’s brand new show Sink Or Swim. This insanely comic tale of three men and their struggles at sea will tour next year with support from Liverpool Everyman and Playhouse and The Lowry. FRI 26 | EVERYONE

Making Theatre: Gemma Bodinetz and the Liverpool Gang For the opening of this year’s festival, supported by Liverpool John Moores University, Everyman and Playhouse Artistic Director Gemma Bodinetz invites award-winning Liverpool playwrights – Helen Blakeman, Lizzie Nunnery, and Jeff Young – to share how they make theatre in this city and beyond…

In 1981 in the Playhouse Studio, Jim Morris wrote a play about the life of Liverpool teenagers which spoke to a generation. Thirty years later on, YEP Actors revisit this landmark forgotten classic to see where we are now.

A day-long intensive workshop for professional writers and other theatre makers, with Clive Mendus from the internationally acclaimed Complicite. An opportunity to investigate theatrical storytelling and how to translate play and experiment into words on a page. FRI 26 | PROFESSIONAL WRITERS / ACTORS

How do Ideas Blossom?

ROLL UP ROLL UP FOR EVERYWORD 2012 A WEEK OF NEW STORIES, INSPIRING WORKSHOPS AND CREATIVE IDEAS

AT THE PLAYHOUSE AND BEYOND

Inside the Rehearsal Room With Lorne Campbell, Joe Ward Munrow and the cast of Held

Director Lorne Campbell and playwright Joe Ward Munrow are opening up their rehearsal room for Held ahead of its world premiere in the Playhouse Studio this November. Part-observation, part-workshop, this is perfect for playwrights and directors of new work keen to explore techniques and processes in the development and rehearsal of a new play.

Everyword Closing Party Everyword is collaboration: between writers, actors, directors, musicians and artists; between the staff behind the scenes; between those who turn up. It only happens with a little help from our friends, and now it’s time to let our collective hair down. For your invitation please email literary@everymanplayhouse.com

Black Hound Howling The Alligator Social Playwrights! Leave your garret, put down your pen, and raise a glass or two. The Alligators – an informal group of working playwrights – will be taking over the Everyword Tent and inviting playwrights to join them at the bar.

One of Liverpool’s most acclaimed playwrights (Intemperance, The Swallowing Dark), singer and songwriter Lizzie Nunnery’s music is as engaged with folk tradition as with the present musical and political moment. In the theatrical surroundings of the Scandinavian Church, she will be joined by her collaborator Vidar Norheim and a collective of local musicians to launch her new album. THU 25 | EVERYONE

Picture A City BOX OF TRICKS

Box of Tricks has been gathering photographs of the city from all across Liverpool. You can be part of it. Take a photograph of somewhere in Liverpool of an image that means something to you. Each night of the festival, the city will be imagined anew by a different Liverpool writer – a snapshot of a story, inspired by a picture of the city. They will be telling their stories at 7pm each evening. (Limited availability so please pick up a ticket from the Box Office.) You can submit your photographs at http://pictureacity.posterous.com/ EVERYDAY | EVERYONE

Jeff’s Brain There is a building in Liverpool where the inner workings of playwright Jeff Young’s brain have been installed. Pick up a map from the Playhouse Box Office to guide you to an installation charting the influences of this playwright: from the artistic and the personal, and everything in between. SAT 27 | EVERYONE

FIRST AID BOX In need of emergency dramaturgy? Designed for all your script-writing ailments, the First Aid Box will be located in the Everyword Tent for the duration of the festival. Leave your script in the box and we’ll respond with the best remedy. EVERYDAY | EVERYONE

The Tent Up in the top of the glass lantern extension of The Playhouse Theatre, The Tent is being raised for Everyword. Open at noon each day, this is the hub of the festival. This is where the thinking and reading and talking and drinking will happen (probably in that order). Where all the best ideas are imagined. This is where you’ll find a gramophone, some questionable records, a pack of playing cards, and lots and lots of coffee. The bar’s open – we’ll see you there. EVERYDAY | EVERYONE

THE INCIDENT ROOM Up the stairs and behind the curtain, you will find The Incident Room: a sound installation of short audio plays and other fragments, written by the next generation of Liverpool playwrights. EVERYDAY | EVERYONE

* YEP is Young Everyman and Playhouse. Aimed at Young people aged 11 to 25. YEP will be the writers, actors, technicians, audiences and cultural leaders of the future.

A week of new stories, inspiring workshops and creative ideas at the Playhouse and beyond. 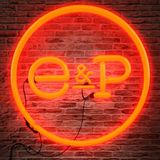