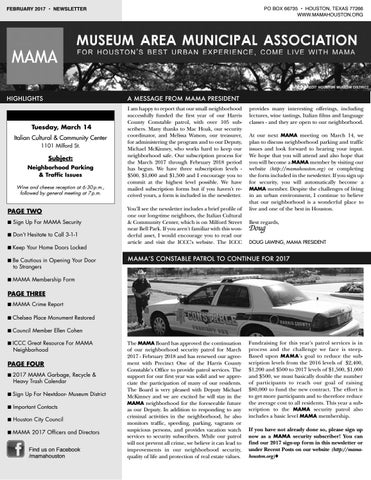 A MESSAGE FROM MAMA PRESIDENT

I am happy to report that our small neighborhood successfully funded the first year of our Harris County Constable patrol, with over 105 subscribers. Many thanks to Mac Hoak, our security coordinator, and Melissa Watson, our treasurer, for administering the program and to our Deputy, Michael McKinney, who works hard to keep our neighborhood safe. Our subscription process for the March 2017 through February 2018 period has begun. We have three subscription levels $500, $1,000 and $1,500 and I encourage you to commit at the highest level possible. We have mailed subscription forms but if you haven&#39;t received yours, a form is included in the newsletter. You&#39;ll see the newsletter includes a brief profile of one our long-time neighbors, the Italian Cultural &amp; Community Center, which is on Milford Street near Bell Park. If you aren&#39;t familiar with this wonderful asset, I would encourage you to read our article and visit the ICCC&#39;s website. The ICCC

provides many interesting offerings, including lectures, wine tastings, Italian films and language classes - and they are open to our neighborhood. At our next MAMA meeting on March 14, we plan to discuss neighborhood parking and traffic issues and look forward to hearing your input. We hope that you will attend and also hope that you will become a MAMA member by visiting our website (http://mamahouston.org) or completing the form included in the newsletter. If you sign up for security, you will automatically become a MAMA member. Despite the challenges of living in an urban environment, I continue to believe that our neighborhood is a wonderful place to live and one of the best in Houston. Best regards,

MAMA’S CONSTABLE PATROL TO CONTINUE FOR 2017

The MAMA Board has approved the continuation of our neighborhood security patrol for March 2017 - February 2018 and has renewed our agreement with Precinct One of the Harris County Constable&#39;s Office to provide patrol services. The support for our first year was solid and we appreciate the participation of many of our residents. The Board is very pleased with Deputy Michael McKinney and we are excited he will stay in the MAMA neighborhood for the foreseeable future as our Deputy. In addition to responding to any criminal activities in the neighborhood, he also monitors traffic, speeding, parking, vagrants or suspicious persons, and provides vacation watch services to security subscribers. While our patrol will not prevent all crime, we believe it can lead to improvements in our neighborhood security, quality of life and protection of real estate values.

Fundraising for this year&#39;s patrol services is in process and the challenge we face is steep. Based upon MAMA &#39;s goal to reduce the subscription levels from the 2016 levels of $2,400, $1,200 and $500 to 2017 levels of $1,500, $1,000 and $500, we must basically double the number of participants to reach our goal of raising $80,000 to fund the new contract. The effort is to get more participants and to therefore reduce the average cost to all residents. This year a subscription to the MAMA security patrol also includes a basic level MAMA membership. If you have not already done so, please sign up now as a MAMA security subscriber! You can find our 2017 sign-up form in this newsletter or under Recent Posts on our website (http://mamahouston.org)♦

BE CAUTIOUS IN OPENING YOUR DOOR TO STRANGERS Although many solicitors are legitimate, some are merely casing your house for a possible burglary attempt.

YOUR LINK TO CITY SERVICES If you need a connection to almost anything the City of Houston does – well, your solution may be as close as dialing 3-1-1. It’s fast. It’s easy. And most often your call gets quick results. It’s not unusual to see the 3-1-1 troubleshooting truck on the job the day after you call. Sometimes, the job may be bigger and it may take longer, but don’t wait for someone else on your block to call. It doesn’t hurt to have multiple calls on the same issue. We are all busy, but being on the watch in the neighborhood helps everyone. It’s a quick way to participate.

Many thanks go to StreetLights Residential, the developer of The Carter on Chelsea, who graciously restored one of the Chelsea Place monuments. Two years ago, a New Years Eve driver hit and badly damaged the monument. The two monuments have been here since the late 1920s when the neighborhood was developed and were restored in the late 1990s by Randy Holste, who developed the townhomes on the corner of Chelsea and Louisiana. If you haven&#39;t noticed the monuments, go take a look at these unique and historical features of our neighborhood.♦

Seven bridges over Highway 59 near the Montrose area and Museum District are finally lit and in case you haven&#39;t noticed, you are in for a treat. New LED lights outline the arches of the bridges while gradually changing color and illuminating the street. Several of the bridges were illuminated when rebuilt over U.S. 59 as p a rt of a freeway widening project completed in 2001. Though popular with drivers and residents in the area, the lights quickly burned out. The new lighting system was paid for by the Montrose Management District, Texas Department of Transportation and Houston-Galveston Area Council. The bridges will be lit every night from now on. The Montrose Management District also has recently installed new signage and median designs so that you can tell you are in the Montrose boundaries. Designed to reflect the &quot;unique dynamic character that is Montrose,&quot; the team behind the changes hopes these new markers will ultimately help the area remain marketable and economically competitive.

ICCC GREAT RESOURCE FOR MAMA NEIGHBORHOOD The Italian Cultural &amp; Community Center, at 1101 Milford Street, is one of MAMA&#39;s hidden treasures. Founded in 1976, the ICCC moved to Milford in 1988 and works to advance, celebrate and preserve Italian culture and heritage. But the Center is not just for Italians, it serves all Italophiles with a rich selection of programs including regular screenings of Italian films, wine tastings, (focusing on the wine and food of specific regions of Italy), chef dinners, cooking classes (including classes for kids) and lectures. And the ICCC also offers Italian language lessons for all levels and the house can be rented for special events. Not to be forgotten - the ICCC also organizes the popular Houston Italian Festival every October at the University of St. Thomas. The ICCC&#39;s programing is open to all, with members receiving a 10% discount on any program fees. Membership starts at $50 and more information about becoming a member and the ICCC&#39;s programming can be found on the ICCC&#39;s website (www.iccchouston.com). The ICCC has lots going on this spring, including: • a screening on February 15 of Maraviglioso Boccaccio (Wondrous Boccaccio) as part of the ICCC&#39;s Contemporary Italian Film Series

District C Councilwoman, Ellen Cohen In January 2017, Ellen Cohen began her third term as District C&#39;s representative on Houston City Council and her role as the city&#39;s Mayor ProTem. District C is home to over 215,000 people, including MAMA residents, and over 70 active civic clubs. During her first two terms, her office closed 12,000 constituent cases, helping to address neighborhood issues from water main leaks to potholes to missed trash pick-up. Additionally, Ellen has championed the Houston Equal Rights Ordinance, the elimination of the sexual assault kit backlog, the creation of a Parking Benefit District for the Washington Corridor, and many other initiatives to improve the quality of life of her constituents. She also serves as Chair of the City&#39;s Quality of Life Committee. This leadership role allows Ellen to bring before Council for consideration new solutions on a wide variety of issues such as equality, public health, animal policy, trees, parks, and libraries.

• a lecture on Italian shoes on February 28.

Ellen Cohen has lived and worked in the city of Houston for the past 39 years. She served for 10 years as the Executive Director of the American Jewish Committee, and for 18 years as the CEO of the Houston Area Women’s Center, working with survivors of sexual and domestic violence. In 2006, she was elected as the Texas State Representative for District 134 in Houston. After serving two terms in the Texas State Legislature, Ellen decided to continue her public service career at home. She ran for Houston City Council, and was sworn into office in January 2012. Ellen’s career choices are a reflection of her deep commitment to public service. She is dedicated to continually advocating for her community and giving back to the City of Houston.

The ICCC staff welcomes its MAMA neighbors to join them for these as well as other programming so please check out the ICCC&#39;s website and join in the fun that&#39;s right down the street from you!♦

Ellen&#39;s office stands ready to help with issues relating to our MAMA neighborhood. To contact her office, call 832.393.3004 or email at districtc@houstontx.gov.♦

Nextdoor Museum District is a social network for our neighborhood and provides you with a means to communicate with your neighbors in real time about security concerns and incidents. Sign up now by going to https://themuseumdistricttx.nextdoor.com

• City of Houston Help: 311 or www.houston311.org or get the app HOUSTON 311 on your smartphone • Non-Emergency MAMA Security Concerns: security@mamahouston.org

Houston City Council meets every Tuesday at 1:30 p.m. and Wednesday at 9 a.m. in the council chamber at City Hall. Tuesdays are reserved for public comment while Wednesdays are for matters that require council action. All meetings are open to the public. You can also watch current and previous council meetings online at http://houstontx.city.swagit.com/htv1/ PAGE 4 • FEBRUARY 2017