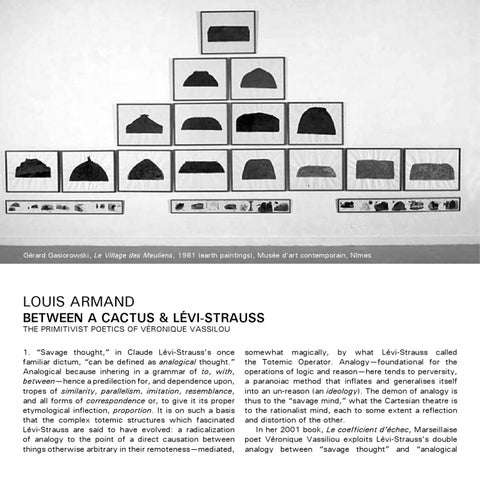 BETWEEN A CACTUS & LÉVI-STRAUSS The Primitivist Poetics of Véronique Vassilou

1. “Savage thought,” in Claude Lévi-Strauss’s once familiar dictum, “can be defined as analogical thought.” Analogical because inhering in a grammar of to, with, between—hence a predilection for, and dependence upon, tropes of similarity, parallelism, imitation, resemblance, and all forms of correspondence or, to give it its proper etymological inflection, proportion. It is on such a basis that the complex totemic structures which fascinated Lévi-Strauss are said to have evolved: a radicalization of analogy to the point of a direct causation between things otherwise arbitrary in their remoteness—mediated,

somewhat magically, by what Lévi-Strauss called the Totemic Operator. Analogy—foundational for the operations of logic and reason—here tends to perversity, a paranoiac method that inflates and generalises itself into an un-reason (an ideology). The demon of analogy is thus to the “savage mind,” what the Cartesian theatre is to the rationalist mind, each to some extent a reflection and distortion of the other. In her 2001 book, Le coefficient d’échec, Marseillaise poet Véronique Vassiliou exploits Lévi-Strauss’s double analogy between “savage thought” and “analogical 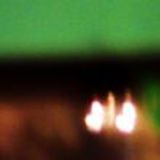