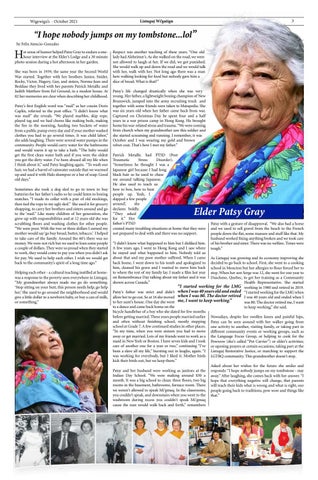 “I hope nobody jumps on my tombstone...lol” by Felix Atencio-Gonzales

er sense of humor helped Patsy Gray to endure a onehour interview at the Elder’s Lodge and a 30 minute photo session during a hot afternoon in her garden. She was born in 1939, the same year the Second World War started. Together with her brothers Junior, Snider, Rocky, Victor, Hagery, Guy, and sisters, Norma-Jean and Beddase they lived with her parents Patrick Metallic and Judith Matthew from Eel Ground, in a modest house. At 82 her memories are clear when describing her childhood. Patsy’s first English word was “mail” as her cousin Doris Caplin, referred to the post office. “I didn’t know what was mail” she reveals. “We played marbles, skip rope, played tag and we had chores like making beds, making the fire in the morning, hauling two buckets of water from a public pump every day and if your mother washed clothes you had to go several times. It was child labor,” she adds laughing. There were several water pumps in the community. People would carry water for the bathrooms and would warm it up to take a bath. “The baby would get the first clean water bath and if you were the oldest you got the dirty water. I’ve been abused all my life when I think about it,” said Patsy laughing again. “To wash our hair, we had a barrel of rainwater outside that we warmed up and used it with Halo shampoo or a bar of soap. Good old days.” Sometimes she took a dog sled to go to town to buy batteries for her father’s radio so he could listen to boxing matches. “I made its collar with a pair of old stockings, then tied the rope to my ugly sled.” She used it for grocery shopping, to carry her brothers and sisters around and go to the ‘mail.” Like many children of her generation, she grew-up with responsibilities and at 12 years old she was scrubbing floors and washing clothes for other people. “We were poor. With the two or three dollars I earned my mother would say ‘go buy bread, butter, tobacco.’ I helped to take care of the family. Around the 60’s there was no money. We were not rich but we used to loan some people a couple of dollars. They were so proud when they started to work, they would come to pay you when you didn’t ask for pay. We used to help each other. I wish we would get back to the community’s spirit of a long time ago.” Helping each other - a cultural teaching instilled at homewas a response to the poverty seen everywhere in Listuguj. “My grandmother always made me go do something. ‘Stop sitting on your butt, this person needs help, go help her.’ She used to go around the neighborhood and would give a little dollar to a newborn baby, or buy a can of milk, or something.”

Respect was another teaching of these years. “One old lady had Alzheimer’s. As she walked on the road, we were not allowed to laugh at her. If we did, we got punished. She would walk up and down the road and we would talk with her, walk with her. Not long ago there was a man here walking looking for food but nobody gave him a slice of bread. What is that?” Patsy’s life changed drastically when she was very young. Her father, a lightweight boxing champion of New Brunswick, jumped into the army recruiting truck and together with some friends were taken to Matapedia. She was six years old when her father came back from war. Captured on Christmas Day he spent four and a half years in a war prison camp in Hong Kong. He brought home his war-related stress and trauma. “We were coming from church when my grandmother saw this soldier and she started screaming and running. I remember, it was October and I was wearing my gold and brown velvet coat. That’s how I met my father.” Patrick Metallic had PTSD (Post Traumatic Stress Disorder). “Sometimes he thought I was a Japanese girl because I had long black hair so he used to chase me around talking Japanese. He also used to teach us how to box, how to beat people up. Yeah, I slapped a few people around’, she declares boldly. “They asked for it.” Her father’s PTSD created many troubling situations at home that they were not prepared to deal with and there was no support.

“I didn’t know what happened to him but I disliked him. A few years ago, I went to Hong Kong and I saw where he stayed and what happened to him. Nobody told us about that and my poor mother suffered. When I came back home, I went down to his tomb and apologized to him, cleaned his grave and I wanted to move him back to where the rest of my family lay. I made a film last year on Remembrance Day talking about my father and it was shown across Canada.”

Patsy with a gesture of disapproval. “We also had a horse and we used to sell gravel from the beach to the French people down the flat, some manure and stuff like that. My husband worked fixing anything broken and we took care of his brother and sister. There was no welfare. Times were tough.”

As Listuguj was growing and its economy improving she decided to go back to school. First, she went to a cooking school in Moncton but her allergies to flour forced her to stop. When her son Serge was 12, she went for one year to Duschene, Quebec, to get her training as a Community Health Representative. She started “I started working for the LMG working in 1980 and retired in 2019. Patsy’s father was strict and didn’t when I was 40 years old and ended “I started working for the LMG when allow her to go out. So at 16 she moved when I was 80. The doctor retired I was 40 years old and ended when I to her aunt’s house. One day she went me, I want to keep working.” was 80. The doctor retired me, I want to a dance and came back home on the to keep working,” she said. bicycle handlebar of a boy who she dated for few months before getting married. These years people married earlier Nowadays, despite her swollen knees and painful hips, and often without finishing school, mostly stopping Patsy can be seen around with her walker going from school at Grade 7. A few continued studies in other places. one activity to another, visiting family, or taking part in “In my time, when you were sixteen you had to move different community events or working groups, such as away or get married. Lots of my friends went to work as a the Language Focus Group, or helping to cook for the maid in New York or Boston. I have seven kids and I took Powwow (she’s called “Pot Carrier”) or elder’s activities; care of another one for a year or two,” continuing “I’ve or opening prayers at certain occasions, taking part at the been a slave all my life,” bursting out in laughs, again. “I Listuguj Restorative Justice, or marching to support the was working for everybody, but I liked it. Mother birds LGTBQ community. This grandmother doesn’t stop. kick their birds out, but we keep them.” Asked about her wishes for the future she smiles and Patsy and her husband were working as janitors at the responds: “I hope nobody jumps on my tombstone - stay Indian Day School. “We were making around $30 a away.” After laughing, she comes back with her answer. “I month. It was a big school to clean: three floors, two big hope that everything negative will change, that parents rooms in the basement, bathrooms, furnace room. There will teach their kids what is wrong and what is right, our we weren’t allowed to speak Mi’gmaq. In the classrooms, people going back to traditions, pow wow and things like you couldn’t speak, and downstairs when you went to the that.” washroom during recess you couldn’t speak Mi’gmaq cause the nun would walk back and forth,” remembers