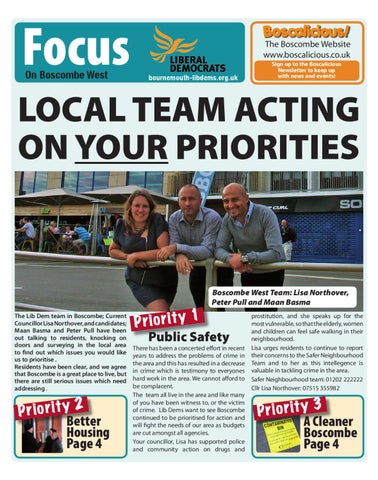 Sign up to the Boscalicious Newsletter to keep up with news and events!

LOCAL TEAM ACTING ON YOUR PRIORITIES

The Lib Dem team in Boscombe; Current Councillor Lisa Northover, and candidates; Maan Basma and Peter Pull have been Â talking to residents, knocking on out doors and surveying in the local area to find out which issues you would like us to prioritise . Residents have been clear, and we agree that Boscombe is a great place to live, but there are still serious issues which need addressing .

There has been a concerted effort in recent years to address the problems of crime in the area and this has resulted in a decrease in crime which is testimony to everyones hard work in the area. We cannot afford to be complacent. The team all live in the area and like many of you have been witness to, or the victim of crime. Lib Dems want to see Boscombe continued to be prioritised for action and will fight the needs of our area as budgets are cut amongst all agencies. Your councillor, Lisa has supported police and community action on drugs and

prostitution, and she speaks up for the most vulnerable, so that the elderly, women and children can feel safe walking in their neighbourhood. Lisa urges residents to continue to report their concerns to the Safer Neighbourhood Team and to her as this intellegence is valuable in tackling crime in the area. Safer Neighbourhood team: 01202 222222 Cllr Lisa Northover: 07515 355982

Liberal Democrats making a difference in Government, since May… Schools: Protecting school spending and starting the Pupil Premium to raise standards among disadvantaged children, worth over £7bn.

Fair votes? Say Yes! Are you fed up with being let down by politics and politicians? Former Lib Dem leader, Paddy Ashdown says “Too many MPs act as if they have a job for life - protected by a cosy voting system that makes it harder for

Pensioners: A “triple lock” to boost pensions every year. From April pension rises will be linked to earnings, prices or 2.5% growth, whichever is highest.

voters to vote them out. All that can change on 5th May 2011 in the Fairer Votes Referendum.”

A new Green Deal: includes 3.5 million extra homes insulated and new action on reducing emissions by 80% by 2050. Liberty: Ending of detention for child asylum seekers, immediate scrapping of ID cards and Liberal Democrat review of counter terrorism measures. Crime: Cutting re-offending through smarter prison sentences which include more investment in rehabilitation. Economy £1bn: Regional Growth Fund to help parts of the UK most at risk. Bank levy: to raise £2.5bn and reign in irresponsible bankers. Student fees: poorest 30% pay less, fees capped, earnings have to be higher (over £21K) before any re-payments. Also part time students get a better deal. Fees would have been higher under a Conservative-only Government. However many Lib Dem MPs will still oppose this deal and will campaign for better.

A Yes vote will mean you can rank your candidates in the order you want them. It’s as simple as 1, 2, 3... The winner will have to get at least HALF the votes, so only those with popular support will get elected. “No MP will be

Signing the petition to make our vote count in Bournemouth

Coalition takes difficult decisions on the Economy The Liberal Democrats in Government have taken urgent action to stop the country going bankrupt. Lib Dem Leader & Deputy PM, Nick Clegg explained, “Labour’s debt will last for a generation. They left us with no option but to cut spending. Make no

mistake - these are Labour’s cuts.”

The Lib Dems in Government are working hard to make sure the cuts are as fair as possible. The Lib Dems are also cutting red tape, and working to still progress the many issues

able to take local people for granted anymore.” If you want to support the “Yes” campaign then please get in touch. Sign up to the campaign online at www. libdems.org.uk/fairervotes or return the slip on the back

Factfile Labour’s legacy: £120m of interest payments, every day! •When in Government for every £4 spent, £1 was borrowed. •All summed up by the Labour minister’s note to the new Government “I’m afraid there is no money left.”

General Election campaign promise kept: cutting tax for the lowest earners: 880,000 taken out of paying any income tax from 2011.

Alasdair Murray and Lisa Northover, Lib Dem candidates thank the thousands who voted for them at the general election, as part of the extra one million who voted Liberal Democrat in May.

•Councillors’ allowances, up a shocking 35% since the Conservatives took power. Over £200,000 a year extra, most going on higher paid jobs the Conservative councillors have given themselves. •Local Conservatives didn’t want you to know how they vote on key decisions, so you can’t hold them to account. Only after a 3 year Lib Dem campaign have they relented, and allowed recorded votes - but not for all meetings. •Scandals have dogged the local Conservatives. At one stage their leader and deputy were both being investigated, and others suspended or apologising for their behaviour. •Staff not listened to – scrapping the staff consultation panel, so there is no formal link between the staff who know what’s going on, and the elected councillors.

Did you know? Town Planning …The Tories promised to stop over development, but many Conservative councillors are posed by the Lib Closure of Op De s and others, property developers or Townsend School butmno w (within 3 consultants, and some have been years of that criticised by independent decision) an extra £6 .5m illion is needed for Planning Inspectors for further classes in othe r schools, due to a lack of classroom spac over development! es. A generation of children will face crow ded schools and temporary accommod Casino…for or against? ation. ...thanks to the local Tories' decision . It depends on who, and when you ask the local Tories about this issue. £45,000 Palm Trees Having campaigned to stop car parks for Landsdowne:. being sold off, the local Tories are Have the local Tories got their priorities right? now... selling off car parks! Conservatives fought an election saying that they wanted a vision for the town (without saying what their vision was). Now they’ve used £1.7 million of Council Taxpayers Tories increase high earner money for the “Town Centre Master salaries for council jobs 120 Vision” ... but no new buildings or jobs 118 staff now paid over £50,000, more have come from that spending. How than double the 90 amount of just 4 much will their vision for the rest of years ago, when the Town cost us? the Lib Dems last high paid

council jobs in 2010 under local Tories

A fresh start for Bournemouth After four years of disappointment the residents of Bournemouth will be given the chance in May 2011 to choose their new local councillors. Will it be four more years of the same? Or is there a real choice?

If you’d like to help make a difference locally please get in touch, via our website or use the slip over the page.

The Liberal Democrat candidates are far more representative of Bournemouth, in gender, age, ethnicity and outlook than other parties. We also represent a fresh start, with many new to party politics, but with plenty of experience of getting things done. The local Lib Dems have a record of running the town efficiently in the past. Boosting recycling, cutting crime and protecting frontline services all happened under the Lib Dems. We are also passionate about putting cultural services back in the town, cutting councillor expenses and ensuring basic services, (not grand Town centre visions), are there for all residents.

Lisa Northover Lisa lives in Boscombe and has been a local councillor since 2007. With real passion for the local community Lisa has been involved in lots of projects and changes in the Boscombe area. Maan Basma Maan lives in Boscombe. He has been a dental technician for 20 years and recently qualified as a teacher. Maan also teaches adults with learning difficulties and mental health issues on a voluntary basis in Walpole Rd Boscombe. Peter Pull Peter lives in Boscombe where three generations of his family have grown up, he has worked for 24 years for the Roman Group stationers and printers that are based near Boscombe. Peter is interested in many sports and encouraging local business to grow.

Housing is the issue which underpins most of the problems in Boscombe. Poor planning over many years has led to a dominance of single person units and bedsits. The Lib Dems in Boscombe are making representations to make sure that planners understand the impact of allowing one type of housing to dominate, and plan for a more mixed community in the future.

Poorly managed housing is blighting our area. We want to hear from you if your housing is substandard. Your examples can give us the evidence we need to show that change needs to happen. If your house is classed as a “House in Multiple occupancy” your landlord may require a licence and have extra responsibilities to keep your home in a safe condition. See our guide to find out more a

The Liberal Democrat team, are campaigning for better disposal of large items and better arrangements for bins.

You may be living in an HMO if you live in a house or flat that is occupied by more than one household. This could include: Bedsits, houses and flatshares, with separate tenancy agreements, hostels and B&B’s that are not just for holidays. It is not always easy to work out whether you live in an HMO or not. If unsure, contact us.

HMO landlord responsibilities • fire safety alarms in place • property not to be overcrowded • adequate cooking and washing facilities • communal areas and shared facilities are clean and in good repair • enough rubbish bins. HMO’s need to be registered with the council if at least three storeys high and containing five or more people. The council will consider if the property is large enough for the occupants and well managed. A landlord can be prosecuted if their HMO falls within this definition but is not registered with the council.

• Register and keep up to date with news • Ask us any questions, or share your views • Help get the team elected

Help us win We have some of the highest charges in the country to get rid of large items, and with few people having cars in the area people cannot get to the tip. Lisa has been pushing for cheaper ways to dispose of large items.

Charges to take away large items are £38. Other parts of the country charge £10 or less

Do I live in a “House in Multiple occupancy” ?

house. Storage is difficult and unsightly and contaminated bins are not collected. We don’t think this is good enough. The Lib Dems are taking action on this. We want to see less bins with bigger capacity, and shared bins in the area’s where this is a problem, making the streets look less cluttered and cleaner.

Putting up a poster at election time Delivering leaflets near where I live Donate - make it a fair fight: Doing clerical work Attending social or fundraising event Getting involved in local campaigns 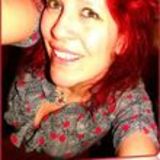