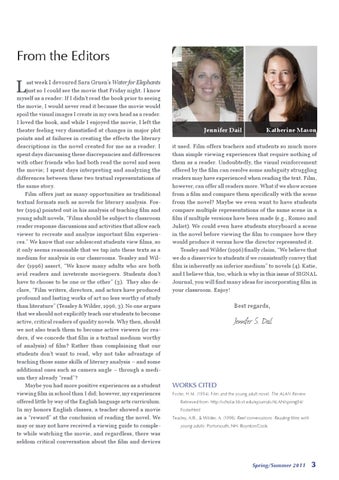 ast week I devoured Sara Gruen’s Water for Elephants just so I could see the movie that Friday night. I know myself as a reader: If I didn’t read the book prior to seeing the movie, I would never read it because the movie would spoil the visual images I create in my own head as a reader. I loved the book, and while I enjoyed the movie, I left the theater feeling very dissatisfied at changes in major plot points and at failures in creating the effects the literary descriptions in the novel created for me as a reader. I spent days discussing these discrepancies and differences with other friends who had both read the novel and seen the movie; I spent days interpreting and analyzing the differences between these two textual representations of the same story. Film offers just as many opportunities as traditional textual formats such as novels for literary analysis. Foster (1994) pointed out in his analysis of teaching film and young adult novels, “Films should be subject to classroom reader response discussions and activities that allow each viewer to recreate and analyze important film experiences.” We know that our adolescent students view films, so it only seems reasonable that we tap into these texts as a medium for analysis in our classrooms. Teasley and Wilder (1996) assert, “We know many adults who are both avid readers and inveterate moviegoers. Students don’t have to choose to be one or the other” (3). They also declare, “Film writers, directors, and actors have produced profound and lasting works of art no less worthy of study than literature” (Teasley &amp; Wilder, 1996, 3). No one argues that we should not explicitly teach our students to become active, critical readers of quality novels. Why then, should we not also teach them to become active viewers (or readers, if we concede that film is a textual medium worthy of analysis) of film? Rather than complaining that our students don’t want to read, why not take advantage of teaching those same skills of literary analysis – and some additional ones such as camera angle – through a medium they already “read”? Maybe you had more positive experiences as a student viewing film in school than I did; however, my experiences offered little by way of the English language arts curriculum. In my honors English classes, a teacher showed a movie as a “reward” at the conclusion of reading the novel. We may or may not have received a viewing guide to complete while watching the movie, and regardless, there was seldom critical conversation about the film and devices

it used. Film offers teachers and students so much more than simple viewing experiences that require nothing of them as a reader. Undoubtedly, the visual reinforcement offered by the film can resolve some ambiguity struggling readers may have experienced when reading the text. Film, however, can offer all readers more. What if we show scenes from a film and compare them specifically with the scene from the novel? Maybe we even want to have students compare multiple representations of the same scene in a film if multiple versions have been made (e.g., Romeo and Juliet). We could even have students storyboard a scene in the novel before viewing the film to compare how they would produce it versus how the director represented it. Teasley and Wilder (1996) finally claim, “We believe that we do a disservice to students if we consistently convey that film is inherently an inferior medium” to novels (4). Katie, and I believe this, too, which is why in this issue of SIGNAL Journal, you will find many ideas for incorporating film in your classroom. Enjoy!

mag for ya educators 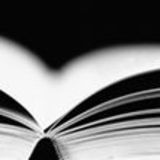