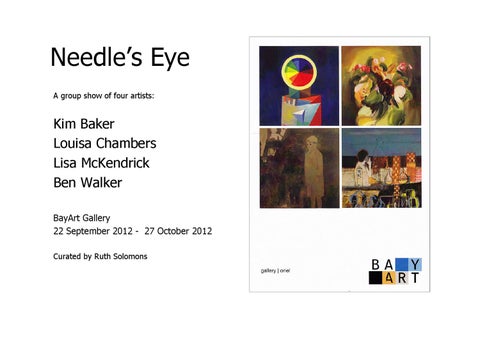 About the Artists Kim Baker - a former student from Cardiff Art Foundation - has recently won a commission to complete 8 paintings for the Four Seasons Hotel in St Petersburg, Russia. Kim has widely exhibited, including group and solo exhibitions and art fairs in London, New York, Newcastle and France and in 2009 she completed a residency at the Signy Olaf Willums Art Foundation in France. Her work has also been featured in Art Monthly, Time Out and S Magazine. Kim distils a subject matter of classical and romantic connotations through her sensory interpretation of colour and lyrical form. Her paintings expand this beyond an initial formal approach to gestural expressive brushwork, into an intense grappled world of floral painterly complexity. Louisa Chambers award winner from Bow Arts Open, Bermondsey Project Space 2012, and 2011 Core Arts Prize, Core Gallery, is currently Artist-in-Residence at Repton School, Derby. Since graduating from the RCA in 2007, Louisa has shown her work extensively. Louisa Chambers&#39; paintings seem to present an alternative universe where authoritarian structures of technology/science fiction are hijacked by absurd anthropomorphic embellishment. Painter and musician Lisa McKendrick studied painting at Unitec Institute of Technology, Auckland. She is currently an artist in residence with Bow Arts Trust, London. Her work was recently selected for Bow Arts Open Show 2012 and BAT pack III 2012. She was also selected for Jerwood Contemporary Painters 2007. Lisa fills her paintings with quixotic imagery which willfully resist the laws of physics and elude a readable narrative. Ben Walker first prize winner of the Jack Goldhill Painting Prize 2012 and featured artist in National Eisteddfod of Wales 2012 has a live/work residency at Balfren Tower E14. Ben narrows his source material into an emotional response conveyed through painterly expression. His instinct is to erase all but the most profound and essential details. Ruth Solomons combines her practice as a curator, arts reviewer and painter. Recent exhibitions in 2012 include &#39;BEEP Wales&#39; Volcano Theatre, Swansea and &#39;Games People Play&#39; Nolias Gallery, London SE1 Press and articles http://www.scoop.it/t/needle-s-eye Artists websites: www.lisamckendrick.co.uk www.benwalkerart.co.uk www.kimbaker.co.uk www.louisachambers.com Curator: www.ruthsolomons.com

Press Release: The four artists presented here are all working with ideas of impossibility. Symbology, gesture, emotion and playfulness push each of their subject sources through the eye of a needle into works of vast connotation and visual richness.

Kim Baker&#39;s starting premise is that the magical beauty of an imagined garden is best interpreted instinctually. Organic forms act like a basic primal motive for the very human gestural processes which she employs. The original subject matter undergoes a kind of material and sensual transformation that transcends mere representation. Her approach is one of stopping to smell the roses, through purposeful and considered markmaking intertwined with painterly accident.

Ben Walker&#39;s source material of the Holocaust and Nazism confounds an easy literal understanding due to its historical scale, weight, and overwhelming horror. Ben Walker&#39;s paintings strive to tell a bleak and emotional truth through the sparingly described surfaces of his coarse grained linen canvases. Abused bodies hollowed and shadowed from severe privations, and androgynous children barely discernible amid traces of abandoned landscapes, convey small details of the stark histories implied. It is through what is left out that the true meaning is understood.

Louisa Chambers paints impossible constructions of architectural and scientific authority imbued with dreamlike symbols and organic elements. She takes technology through the looking glass and transforms it into machines of our imagination. Louisa Chambers&#39; paintings seem to offer ways through which to cope with a contemporary sense of conflict between our inner dreamworld and the daily imposition of robotic control on our lives.

Lisa McKendrick&#39;s paintings derive from a personal sense of psyche â&amp;#x20AC;&amp;#x201C; intuitive symbology from an internal world of dreams and influenced by childhood memories of her Mexican heritage. Objects emptied of function crowd her paintings, unanchored against surreal luminous landscapes. Their clashing perspectives present opposing worlds existing at once: reality and illusion, the present and the past, the living and the dead. These four artists present four needles&#39; eyes. Kim Baker distils a subject matter of classical and romantic connotations through her sensory interpretation of colour and lyrical form. Her paintings expand this beyond an initial formal approach to gestural expressive brushwork, into an intense grappled world of floral painterly complexity. Ben Walker similarly narrows his source material into an emotional response conveyed through painterly expression. But contrastingly Ben Walker&#39;s instinct is to erase all but the most profound and essential details. Louisa Chambers&#39; paintings seem to present an alternative universe where authoritarian structures of technology/science fiction are hijacked by absurd anthropomorphic embellishment. Similarly Lisa McKendrick fills her paintings with quixotic imagery which willfully resists the laws of physics and eludes a readable narrative. For both Lisa McKendrick and Louisa Chambers the needle&#39;s eye makes allowable a child-like and intuitive playfulness, opening up a surreal psychological playground in which to set their imaginations free. - Text by Ruth Solomons

Are Louisa Chambers&#39; Paintings Abstract? An essay by Ruth Solomons They don&#39;t look like part of the real world and yet they are of things. But the things she is depicting don&#39;t have real forms – such as could be described by a directional light – and they are not subject to an earthly gravitational force. If you were to divide painting into figurative, surrealist and abstract, then Chambers&#39; paintings would be a venn diagram of all three. The subjects being depicted in themselves have become abstracted before they even caught her eye. They are machines of the imagination – forgotten inventions and subverted visions of a world driven by technology. The transformations these objects and situations undergo in their visual representation in paint, brings the question to mind for me whether Chambers&#39; paintings are abstract, or figurative, or something else altogether? A metallicised headdress on the silhouetted mask figure-robot in Flash-light echoes the regal style of Ancient Egyptian pharoah busts, in this way elevating an absurd subject through notions of dignity. The roving eyes in Watching You, Watching Me embellish claustrophobically multiplying cuboid-towers, adding disconcerting anthropomorphism into the pot too. Through an empathetic response in her painting method, Chambers&#39; objects and figures of curiosity seem to become more real than abstract as a result. My first point of comparison would be Dalí, such as the melting clocks in The Persistence of Memory, and Sleep where a recognisably sleeping face is propped up by sticks, isolating the very essence of that state. Dalí&#39;s painting method is convincing enough to add pathos and credibility to the most absurd combinations of objects. But whereas such Surrealist paintings owed a lot stylistically to a long history of charismatic masterly painting leading back to the Renaissance period, Chambers borrows from a mode of painting more synonymous with geometric abstraction, using a fantastical palette far removed from everyday real-life materials. She employs repetitive and echoing shapes rather than light and shade. Geometric forms such as tubes, polygons, cones and cylinders dominate, a particularly good example being her Rhombus and Rectangular painting. So next I would be inclined to raise a case for describing Chambers&#39; work in abstract terms.

Philip Taaffe, The ornament strikes back

In common with Bridget Riley, Beatriz Milhazes and Jasper Johns – there is a pattern in mind to these paintings. Part of the enjoyment in making them must be the colour relationships generated – the nuances developed through sensitive application of every painted facet. For although the surfaces of Chambers&#39; paintings are by and large composed of enclosed blocked-in areas, each apparently flat area has variation within it – whether visible through brushwork, shading, the heaviness of the paint, or underpainting revealing itself beneath. For me this places her work in the same part of the venn diagram as Jasper Johns with his encaustic-applied segments of the Flag and Target paintings, and as Beatriz Milhazes with her obsessive method of transferring solidified paint from plastic sheets onto the painting surface, despite the small imperfections which inevitably result. In Beams, Chambers has painted a disseminated lighthouse itself disintegrating into floating triangles of light, overlaid and piled up - ambiguous in their solidity. The colourplay around an idea of emanating light references a sort of geometric abstraction, although not in a self-conscious way, such as is evident in Philip Taaffe or Peter Halley&#39;s “neo-geo” paintings, whose surfaces concertedly recall that aesthetic pioneered by 1960s Colour-field and Op paintings. In the surrealism part of the venn diagram Chambers may have motives in common with Dalí, Magritte and Georges Malkine, in the descriptive sorts of images which result, imbued with pathos and absurdity. But overwhelmingly the tradition of figurative art is present, from the beginning, in her loyalty to the subject matter. Her depictions of objects from history, albeit a less well-known history drawn from obscure science and forgotten inventions, puts her firmly in the same category as Pieter Bruegel the Elder&#39;s Tower of Babel paintings and hypervigilant compositions by Carlo Crivelli particularly The Annunciation, with Saint Emidius, an unrivalled feat of one-point perspective on permanent display at the National Gallery.

Chambers&#39; approach to painting is not absurd for absurdity&#39;s sake, nor colour-driven as uncompromisingly as high geometric abstraction, nor as earnest and slavishly representational as traditional figuration. The subjects, methods and resolving of her paintings all carry through a very idiosyncratic vision; hard to define, but easy to intuit once presented with them in the flesh, dodging between easy categorisations through their playful search for a truth beneath the obvious surfaces of things. So, in conclusion, you couldn&#39;t box Chambers&#39; paintings into a definition of being abstract, but interpretation of her work would, in my opinion, benefit from a lexicon which included discussion of her abstraction of the subject matter, and the abstract painterly concerns within her method which fall outside the realm of straight figurative description. In addition to the transformations her subject sources undergo through her style of representation, it is rewarding to also pay attention to Chambers&#39; sensitive application of paint, the colour relationships developed across the surfaces, and the dissemination of forms into simpler repetitive shapes â&amp;#x20AC;&amp;#x201C; all considerations which are more commonly discussed in relation to abstract painting. Edited version appeared in Garageland Issue 13 Paint launched 17/02/12 published by Transition Gallery 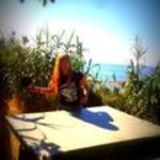