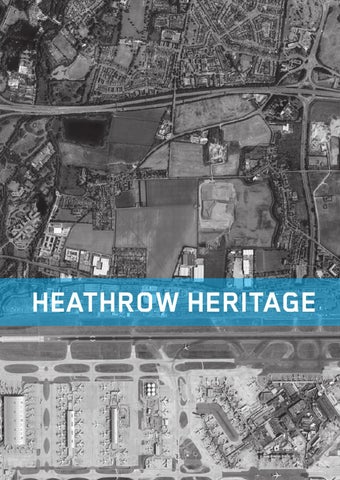 With Thanks to Grow Heathrow (especially Ralph), Deacon Robert, Douglas Rust, Philip Sherwood, Alf Pereira Heathrow Heritage is made in collaboration with squatting activists at Grow Heathrow using history as a focus to bring stranded passengers and local villagers together.

A-1 RAJ THE HOMELESS â&amp;#x20AC;&amp;#x153;The unofficial authorised resident of T5â&amp;#x20AC;?. Different staff gave me descriptions of him and when I met Raj, he denied living at the airport. We had conversations surrounding how to approach homeless people at the airport, based on his experience. He gifted me a life advice.

A-2 LISTED RELATIONSHIP Passengers were so bored of waiting they would follow me from one terminal to another. This passenger spent several hours listing events of her recent breakup and showing me Excel files of her expenditure during the relationship.

First Class staff baffled by the characters I meet

Trolley-pusher explains his work in my sketchbook

Dalek-like corridors between the express train and the terminals

The world is full in the repacking area

A-3 INTERVIEW WITH DEACON The Benedictine Deacon in the airport chapel gave his personal recounts of saddest moments. He told stories of staff’s confessions and provided an extraordinary perspective on the positive effects airport disasters had on local life. He said, “we live within inches of death”, possibly referring to his home in the endangered village. Through the support of the Deacon, the chapel has sanctioned our promotion of the tour for stranded passengers. The tour for the stranded passengers starts from the chapel, which is situation between Terminals 1,2 &amp; 3 and is next to the central bus stop.

Village of Harmondsworth from the church tower

B-1 RICHARD COX GRAVE The inventor of the Cox apple is buried in the 12th Century village Church. Before Heathrow was an airport, the hamlets were filled with orchards and had the richest soil in England, producing top agriculture for the rest of the country. An activist and the church warden took my on my first tour.

B-2 OLDEST BARN The warden lead us up the Norman staircase to the church tower to see the Medieval barn. Rumoured to be the oldest and largest barn in England, The “Timber Cathedral” is a source of pride amongst the villagers of Harmondsworth but was bought by a private owner for £1.

B-3 ACTIVISTS WORKSHOPS Aside from protesting against BAA the owners of Heathrow Airport, Grow Heathrow squatted over a mistreated land to revert illegal dumping grounds into village markets. They provide bicycle repair workshops and gardening services for the villagers as well as daybreaks in their adventurous utility structures.

B-4 EXPERIMENTAL EXPERTISE A young mechanic who had worked for the theme park made his raised home in the squat site. It had its own air ventilation, ‘fridge’ and oven made from a mixture of mud and horse manure. A gardener for Kew Gardens also helps with the site’s vegetable planting.

B-5 ACTIVIST TOUR GUIDE Ralph showed me around Grow Heathrow when I first visited the site. His approachable style and openness made his perfect as the tour guide for Heathrow Heritage. In our training sessions he revealed that his mother, who he didnâ&amp;#x20AC;&amp;#x2122;t speak to, was the tour guide for Colchester Castle. We sent him for tour-guiding lessons from his mother.

B-6 FRIENDS IN THE GRAVE One of the local villagers came along a practice tour and showed us a friend he had always talked about. It turned out that the friend was buried in the grave, along with Alfâ&amp;#x20AC;&amp;#x2122;s grandmother, sick baby daughter and many other fellow villagers.

B-7 AIRPLOT Green Peace protested against the Third Runway by buying an acre of land and selling it to 100,000 people around the world, including Liberal Democrats leader Nick Clegg, for ÂŁ2 each. It is now used as an allotment for local and protesters.

B-8 MEETINGS WITH ACTIVISTS One of the main challenges of proposing the idea of a tour to the activists was gaining their trust and proving that I was not a policewoman. We agreed on dedicating a core team of 3 to the project. This discussion made me determined that no activists would have to appear within any airports. As a result, the passengers for the tour would be use the free airport bus to cross the 3minute tunnel between the airport and the villages.

B-9 DRUNK TOUR GUIDE One of the activists was drunk on the day we tested out the tour and would fall over wherever we stopped to take photographs. He has slight aspergers symdrome and gifted me a mint plant.

B-10 CENSUS OF A BANK ROBBER One of the activists did 10 years in prison for bank robbery. He laments the guilt he felt after apologising to his friendâ&amp;#x20AC;&amp;#x2122;s friend, who worked in a bank he had robbed years ago and was terrified after being held at gunpoint by him for being on the phone.

C-1 HISTORIAN DOUGLAS RUST Radio 4 historian and “the official Heathrow Historian” was born and brought up in the villages. He tells tales of historical gossip, such as how Dickens got the name Scrooge in the village, walking to his mistress and stubbled across a herder who was ‘scrooging’ his sheep. Rust kindly showed exclusive maps at his house and made an appearance in the tour.

C-2 HISTORIAN PHILIP SHERWOOD Book writer and local celebrity Philip Sherwood gave advice for the tour. Philip is strongly against the airport expansion, especially because his home would be in danger. I invited activist tour guide Ralph to the interview to give him more confidence about the local history as well as showing him trust.

C-3 THE INITIAL ORDINANCE SURVEY General Roy first started his ordinance survey in these villages. There is still a cannon marking the same location.

C-4 STAR OF DAVID AIRPORT The original Heathrow airport was used for military purposes, where waiting rooms were tents. When it became commercialised the terminals disrupted the Star of David runway, causing the need for constant expansions. General Roy started his ordinance survey in the villages. There is still a cannon marking the same location.

QUOTES FROM STRANDED PASSENGERS “This has made value of my waiting time.” “It’s so surreal, this village is doomed!” “I have children, what is it like to bring up a family here?” -

The airport bought the common lands from the village council through under-handed means to build their head-office but have provided a tranquil landscape from a dishevelled site. Harmondsworth Moor became the largest public park to be made in the century. The combination is an artificial tranquillity set against the background traffic of planes, trains and motorways to supply the airport. The villagers are torn between enjoying the aesthetics and the ethics of the controversial ownership.