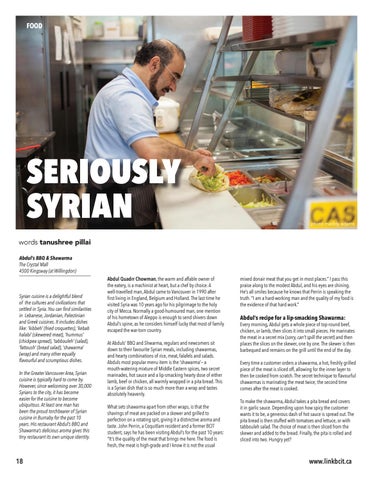 Syrian cuisine is a delightful blend of the cultures and civilizations that settled in Syria. You can find similarities in Lebanese, Jordanian, Palestinian and Greek cuisines. It includes dishes like: ‘kibbeh’ (fried croquettes), ‘kebab halabi’ (skewered meat), ‘hummus’ (chickpea spread), ‘tabbouleh’ (salad), ‘fattoush’ (bread salad), ‘shawarma’ (wrap) and many other equally flavourful and scrumptious dishes. In the Greater Vancouver Area, Syrian cuisine is typically hard to come by. However, since welcoming over 30,000 Syrians to the city, it has become easier for the cuisine to become ubiquitous. At least one man has been the proud torchbearer of Syrian cuisine in Burnaby for the past 10 years. His restaurant Abdul’s BBQ and Shawarma’s delicious aroma gives this tiny restaurant its own unique identity.

Abdul Quadrr Chowman, the warm and affable owner of the eatery, is a machinist at heart, but a chef by choice. A well-travelled man, Abdul came to Vancouver in 1990 after first living in England, Belgium and Holland. The last time he visited Syria was 10 years ago for his pilgrimage to the holy city of Mecca. Normally a good-humoured man, one mention of his hometown of Aleppo is enough to send shivers down Abdul’s spine, as he considers himself lucky that most of family escaped the war-torn country. At Abduls’ BBQ and Shwarma, regulars and newcomers sit down to their favourite Syrian meals, including shawarmas, and hearty combinations of rice, meat, falafels and salads. Abduls most popular menu item is the ‘shawarma’— a mouth-watering mixture of Middle Eastern spices, two secret marinades, hot sauce and a lip-smacking hearty dose of either lamb, beef or chicken, all warmly wrapped in a pita bread. This is a Syrian dish that is so much more than a wrap and tastes absolutely heavenly. What sets shawarma apart from other wraps, is that the shavings of meat are packed on a skewer and grilled to perfection on a rotating spit, giving it a distinctive aroma and taste. John Perrin, a Coquitlam resident and a former BCIT student, says he has been visiting Abdul’s for the past 10 years: “It’s the quality of the meat that brings me here. The food is fresh, the meat is high-grade and I know it is not the usual

mixed donair meat that you get in most places.” I pass this praise along to the modest Abdul, and his eyes are shining. He’s all smiles because he knows that Perrin is speaking the truth. “I am a hard-working man and the quality of my food is the evidence of that hard work.”

Abdul’s recipe for a lip-smacking Shawarma:

Every morning, Abdul gets a whole piece of top-round beef, chicken, or lamb, then slices it into small pieces. He marinates the meat in a secret mix (sorry, can’t spill the secret) and then places the slices on the skewer, one by one. The skewer is then barbequed and remains on the grill until the end of the day. Every time a customer orders a shawarma, a hot, freshly grilled piece of the meat is sliced off, allowing for the inner layer to then be cooked from scratch. The secret technique to flavourful shawarmas is marinating the meat twice; the second time comes after the meat is cooked. To make the shawarma, Abdul takes a pita bread and covers it in garlic sauce. Depending upon how spicy the customer wants it to be, a generous dash of hot sauce is spread out. The pita bread is then stuffed with tomatoes and lettuce, or with tabbouleh salad. The choice of meat is then sliced from the skewer and added to the bread. Finally, the pita is rolled and sliced into two. Hungry yet?