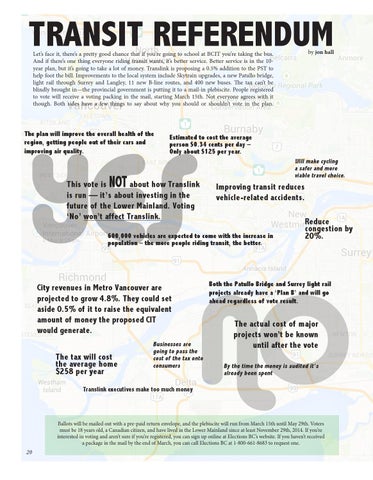 Let’s face it, there’s a pretty good chance that if you’re going to school at BCIT you’re taking the bus. And if there’s one thing everyone riding transit wants, it’s better service. Better service is in the 10year plan, but it’s going to take a lot of money. Translink is proposing a 0.5% addition to the PST to help foot the bill. Improvements to the local system include Skytrain upgrades, a new Patullo bridge, light rail through Surrey and Langley, 11 new B-line routes, and 400 new buses. The tax can’t be blindly brought in—the provincial government is putting it to a mail-in plebiscite. People registered to vote will receive a voting packing in the mail, starting March 15th. Not everyone agrees with it though. Both sides have a few things to say about why you should or shouldn’t vote in the plan.

The plan will improve the overall health of the region, getting people out of their cars and improving air quality.

This vote is about how Translink is run — it’s about investing in the future of the Lower Mainland. Voting ‘No’ won’t affect Translink.

Will make cycling a safer and more viable travel choice.

600,000 vehicles are expected to come with the increase in population – the more people riding transit, the better.

City revenues in Metro Vancouver are projected to grow 4.8%. They could set aside 0.5% of it to raise the equivalent amount of money the proposed CIT would generate. The tax will cost the average home $258 per year

Translink executives make too much money

Both the Patullo Bridge and Surrey light rail projects already have a ‘Plan B’ and will go ahead regardless of vote result.

Ballots will be mailed out with a pre-paid return envelope, and the plebiscite will run from March 15th until May 29th. Voters must be 18 years old, a Canadian citizen, and have lived in the Lower Mainland since at least November 29th, 2014. If you’re interested in voting and aren’t sure if you’re registered, you can sign up online at Elections BC’s website. If you haven’t received a package in the mail by the end of March, you can call Elections BC at 1-800-661-8683 to request one.