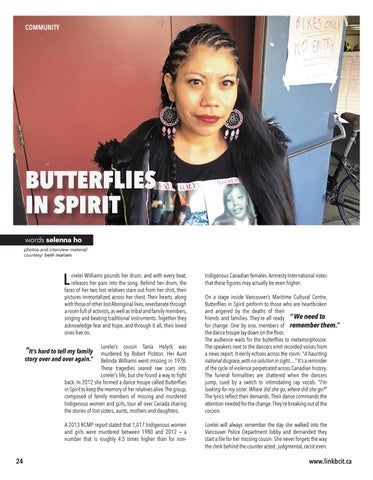 orelei Williams pounds her drum, and with every beat, releases her pain into the song. Behind her drum, the faces of her two lost relatives stare out from her shirt, their pictures immortalized across her chest. Their hearts, along with those of other lost Aboriginal lives, reverberate through a room full of activists, as well as tribal and family members, singing and beating traditional instruments. Together they acknowledge fear and hope, and through it all, their loved ones live on.

Lorelei’s cousin Tania Holyck was murdered by Robert Pickton. Her Aunt story over and over again.” Belinda Williams went missing in 1978. These tragedies seared raw scars into Lorelei’s life, but she found a way to fight back. In 2012 she formed a dance troupe called Butterflies in Spirit to keep the memory of her relatives alive. The group, composed of family members of missing and murdered Indigenous women and girls, tour all over Canada sharing the stories of lost sisters, aunts, mothers and daughters.

“It’s hard to tell my family

Indigenous Canadian females. Amnesty International notes that these figures may actually be even higher. On a stage inside Vancouver’s Maritime Cultural Centre, Butterflies in Spirit perform to those who are heartbroken and angered by the deaths of their friends and families. They’re all ready “ We need to for change. One by one, members of remember them.” the dance troupe lay down on the floor. The audience waits for the butterflies to metamorphosize. The speakers next to the dancers emit recorded voices from a news report. It eerily echoes across the room: “A haunting national disgrace, with no solution in sight…” It’s a reminder of the cycle of violence perpetrated across Canadian history. The funeral formalities are shattered when the dancers jump, cued by a switch to intimidating rap vocals. “I’m looking for my sister. Where did she go, where did she go?” The lyrics reflect their demands. Their dance commands the attention needed for the change. They’re breaking out of the cocoon. Lorelei will always remember the day she walked into the Vancouver Police Department lobby and demanded they start a file for her missing cousin. She never forgets the way the clerk behind the counter acted; judgmental, racist even.