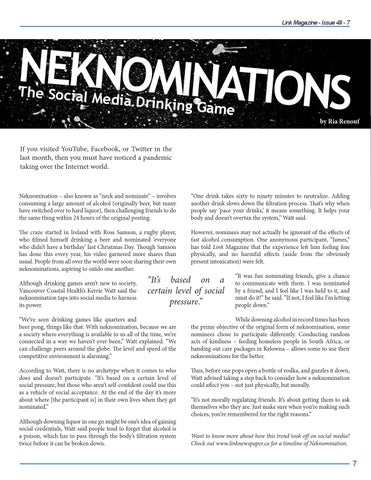 Neknomination – also known as “neck and nominate” – involves consuming a large amount of alcohol (originally beer, but many have switched over to hard liquor), then challenging friends to do the same thing within 24 hours of the original posting.

“One drink takes sixty to ninety minutes to neutralize. Adding another drink slows down the filtration process. That’s why when people say ‘pace your drinks,’ it means something. It helps your body and doesn’t overtax the system,” Watt said.

The craze started in Ireland with Ross Samson, a rugby player, who filmed himself drinking a beer and nominated ‘everyone who didn’t have a birthday’ last Christmas Day. Though Samson has done this every year, his video garnered more shares than usual. People from all over the world were soon sharing their own neknominations, aspiring to outdo one another.

However, nominees may not actually be ignorant of the effects of fast alcohol consumption. One anonymous participant, “James,” has told Link Magazine that the experience left him feeling fine physically, and no harmful effects (aside from the obviously present intoxication) were felt.

“It’s based on a certain level of social pressure.”

“It was fun nominating friends, give a chance to communicate with them. I was nominated by a friend, and I feel like I was held to it, and must do it!” he said. “If not, I feel like I’m letting people down.”

“We’ve seen drinking games like quarters and beer pong, things like that. With neknomination, because we are a society where everything is available to us all of the time, we’re connected in a way we haven’t ever been,” Watt explained. “We can challenge peers around the globe. The level and speed of the competitive environment is alarming.”

While downing alcohol in record times has been the prime objective of the original form of neknomination, some nominees chose to participate differently. Conducting random acts of kindness – feeding homeless people in South Africa, or handing out care packages in Kelowna – allows some to use their neknominations for the better.

According to Watt, there is no archetype when it comes to who does and doesn’t participate. “It’s based on a certain level of social pressure, but those who aren’t self-confident could use this as a vehicle of social acceptance. At the end of the day it’s more about where [the participant is] in their own lives when they get nominated.”

Thus, before one pops open a bottle of vodka, and guzzles it down, Watt advised taking a step back to consider how a neknomination could affect you – not just physically, but morally.

Although downing liquor in one go might be one’s idea of gaining social credentials, Watt said people tend to forget that alcohol is a poison, which has to pass through the body’s filtration system twice before it can be broken down.

“It’s not morally regulating friends. It’s about getting them to ask themselves who they are. Just make sure when you’re making such choices, you’re remembered for the right reasons.” Want to know more about how this trend took off on social media? Check out www.linknewspaper.ca for a timeline of Neknomination.