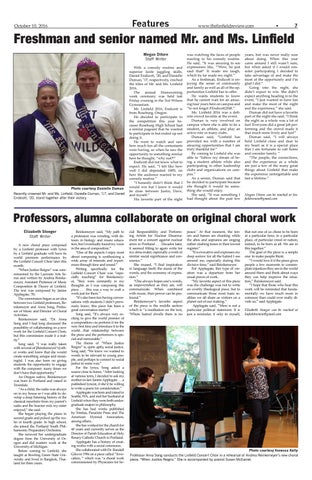 With a comedy routine and superior knife juggling skills, Daniel Endicott, ‘20, and Danielle Duman, ’17, respectively, cinched the titles of Mr. and Ms. Linfield 2016. The annual Homecoming week ceremony was held last Friday evening in the Ted Wilson Gymnasium. Mr. Linfield 2016, Endicott is from Roseburg, Oregon. He decided to participate in the competition this year because Roseburg High School had a similar pageant that he wanted to participate in but ended up not doing it. He went to watch and saw how much fun all the contestants were having, so when he saw the opportunity to something similar here he thought, “why not?!” Endicott did not know what to expect. He said, “I felt like how well I did depended 100% on how the audience reacted to my comedy routine.” “I honestly didn’t think that I would win but I knew it would be close between Justin, Dave, and myself.” His favorite part of the night

was watching the faces of people reacting to his comedy routine. He said, “It was amazing to see expressions like, “‘Wow, he just said that!’ It made me laugh, which by far made my night.” As a freshman, Endicott is enjoying the sense of community and family as well as all of the opportunities Linfield has to offer. He wants students to know that he cannot wait for an amazing four years here on campus and “to not forget #Endicott2048.” Ms. Linfield 2016 was a definite crowd favorite at the event. Duman is very involved on campus where she is able to be a student, an athlete, and play an active role in many clubs. Duman said, “Linfield has provided me with a number of amazing opportunities that I am truly thankful for.” By coming to Linfield she was able to “follow my dream of being a student athlete while also participating in other leadership clubs and organizations on campus.” As a senior, Duman said that he decided to participate because she thought it would be something she would enjoy. She said, “It was something I had thought about the past few

years, but was never really sure about doing. When this year came around I still wasn’t sure, but when asked if I would consider participating I decided to take advantage of and make the most of the opportunity and I’m glad I did.” Going into the night, she didn’t expect to win. She didn’t expect anything heading in to the event, “I just wanted to have fun and make the most of the night and the experience,” she said. Duman did not have a favorite part of the night she said, “I think the night as a whole was a lot of fun! Everyone did a great job performing and the crowd made it that much more lively and fun!” Duman said, “I will always hold Linfield close and dear to my heart as it is a special place that I am fortunate to call home and consider family. “ “The people, the connections, and the experience as a whole are just a few of the many great things about Linfield that make the experience unforgettable and last a lifetime.”

Megan Ditore can be reached at linfieldreview@gmail.com

Professors, alumna collaborate on original choral work Elizabeth Stoeger Staff Writer A new choral piece composed by a Linfield professor with lyrics by a Linfield graduate will have its world premiere performance by the Linfield Concert Choir later this month. “When Justice Reigns” was commissioned by the Lacroute Arts Series and written by Andrea Reinkemeyer, Assistant Professor of Music Composition & Theory at Linfield. The text was composed by Janine Applegate, ‘70. The commission began as an idea between two Linfield professors, Reinkemeyer and Anna Song, Professor of Music and Director of Choral Activities. Reinkemeyer said, “Dr. Anna Song and I had long discussed the possibility of collaborating on a new work for the Linfield Concert Choir, but this commission made it a reality.” Song said, “I was really taken with several of [Reinkemeyer’s] other works and knew that she would create something unique and meaningful. I was also keen on giving students the opportunity to engage with the composer; many times we don’t have that opportunity.” An Oregon native, Reinkemeyer was born in Portland and raised in Troutdale. “As a child, the radio was always on in my house so I was able to develop a deep listening history of the classical repertoire from my parent’s radio and the heavier rock my sister enjoyed,” she said. She began playing the piano in second grade and picked up the violin in fourth grade. In high school, she joined the Portland Youth Philharmonic Preparatory Orchestra. She recieved her undergraduate degree from the University of Oregon and did masters work at the University of Michigan. Before coming to Linfield, she taught at Bowling Green State University and lived in Bangkok, Thailand for three years.

Reinkemeyer said, “My path to a profession was winding, with detours in biology and music education, but I eventually found my voice in the area of composition.” “One of the aspects I enjoy most about composing is synthesizing a wide array of interests and experiences through time and sound.” Writing specifically for the Linfield Concert Choir was “especially touching” for Reinkemeyer, “they were constantly in my thoughts as I was composing this piece . . . this was a way to craft a work just for them.” “It’s also been fun having conversations with students I didn’t previously know; this piece has been a great conversation starter.” Song said, “It’s always very exciting to give the world premier of a composition—to perform it for the very first time and introduce it to the world…that relationship between the piece and the performers is special and memorable.” The theme of “When Justice Reigns” is, quite aptly, social justice. Song said, “We knew we wanted to words to be relevant to young people, and perhaps to connect to social justice in some way.” For the lyrics, Song asked a source close to home, “After looking at various texts, I decided to ask my mother-in-law Janine Applegate . . . a published lyricist, if she’d be willing to write a poem for consideration.” Applegate was born and raised in Seattle, WA, and met her husband at Linfield when they were both undergraduate majors in philosophy. She has had works published by Trinitas, Paraclete Press and The American Hymnal Association, among others. She has worked for the church for 40 years and currently serves as the Director of Parish Education at Holy Rosary Catholic Church in Portland. Applegate has a history of creating works with a social conscience. She collaborated with Dr. Randall Giles in 1984 on a piece called “Invocation, ” which was “a choral work commissioned by Physicians for So-

cial Responsibility and Performing Artists for Nuclear Disarmament for a concert against nuclear arms in Portland . . . Decades later, it seemed fitting to again write for my alma mater, especially a work of similar social significance and conscience.” She mused, “I find inspiration in language itself; the music of the words, and the economy of expression.” “One always hopes one’s words, as impoverished as they are, will communicate. When combined with music, their power can be profound.” Reinkemeyer’s favorite aspect of the piece is the middle section which is “a meditation on the text, ‘Where hatred dwells there is no

peace.’ At that moment, the tenors and basses are chanting while the altos and sopranos are singing rather clashing tones in their lowest register.” “It is evocative and expresses my deep sorrow for all the hatred I see around me, especially during this divisive time,” said Reinkemeyer. For Applegate, this type of creation was a departure from her usual pieces of work. “My favorite aspect of this piece was the challenge was not to write an overtly theological piece, but to communicate those most basic realities we all share as visitors on a planet not of our making.” Applegate said, “Mine is not a particular political statement. It is just a reminder, if only to myself,

that not one of us chose to be born at a particular time, in a particular place, of particular creed or nation; indeed, to be born at all. We are in this together.” The goal of the piece is a simple one: to make people think. “I would love it if the piece gives people a few moments to contemplate injustices they see in the world around them and think about ways they can help improve the situation,” Reinkemeyer said. “I hope that those who hear this work will be reminded that fundamentally we have much more in common than could ever really divide us,” said Applegate. Elizabeth Stoeger can be reached at linfieldreview@gmail.com