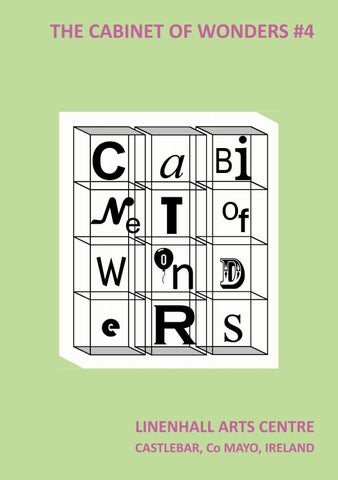 THE CABINET OF WONDERS #4

PREFACE Cabinets of Curiosities, also known as Kunstkabinette or Wunderkammern, were collections of unusual objects which offered insights into the rich and often curious diversity of the natural world and beyond, spanning everything from antiquities and religious relics to natural ‘freaks’, medical curiosities and other uncategorisable items. Inspired by the empirical approach of Classical thinkers such as Aristotle and Pliny the Elder, Cabinets of Curiosities found their beginnings in the time of the Renaissance. Initially seen as both edifying and as markers of status for their collector-curators, they offered a cocktail of learning and entertainment. The Cabinets remained a mostly exclusive preserve of the rich and influential, until in the 19th century the likes of showman PT Barnum’s American Museum introduced a more public and often sensationalist sensibility. While the fashion for Cabinets of Curiosities no longer holds popular currency (with a few notable exceptions), they paved the way for the more formal and rigorous museum model that we are familiar with today. Taking its inspiration from the Cabinet of Curiosities, The Cabinet of Wonders presents a series of objects mined from the creative imagination of a selection of contemporary visual artists. Inspired by the eclectic approach of the original collector-curators, it presents a range of works that will hopefully intrigue and engage the passing viewer.

CURATOR’S NOTE This catalogue documents the fourth incarnation of The Cabinet of Wonders. As previously, it is the result of an open call-out to artists, and acknowledges the subjective eclecticism excercised by collectors as early practitioners of curatorial practice. The artists: Cecilia Bullo entwines pain and pleasure in cutlery that evokes the psychological conflicting processes associated with eating disorders; Lorcan Cassidy submits fictitious archaeological artefacts of Sonnunrec, a god of death, pestilence and famine; Jenny Fox transforms a humble and undesirable everyday object into an arresting visual curiosity full of pithy verbal associations; Pauline Garavan presents a metaphorical meditation on the ubiquitous nature of grass as a covering of the earth; Maree Hensey explores memory, loss, the unknown, subliminal and haunting relics of our past and present lives; Julianne Knowles captures the essence of two mirrored houses, “memories collected, subjective and sincere”; Morwenna Lake offers an enigmatic and uncomfortable object allegedly procured by her Great-grandfather, Aloysius Whipple; Fiona Maye proffers a set of potion bottles made by the late ‘Queen of Connemara’ Bina McLoughlin which may just have inspired the work of renowned artist Christo... Sandra McCall explores the often subtle dialogue between natural and man-made objects; Áine O’Hara evokes the physical and psychological space of her grandmother’s former living room; Caroline Walshe presents a visual sonic score of sound poetry used in performance by sonic flâneur the Dowager Marchylove... With thanks as ever to the Linenhall Arts Centre for facilitating this project, and to all the artists who submitted proposals. Ian Wieczorek

Cecilia Bullo Holy Anorexia (cutlery, thorns) This work investigates the penitential ritualistic practices by ascetic medieval saints, relating it to modern manifestation of fasting such as anorexia nervosa. The thorn-covered cutlery was used by the artist as eating tools during a performance. Pain and pleasure were entwined in the same action, attempting to evoke similar psychological conflicting processes often experienced by people suffering from eating disorders.

As an artist my work revolves around creating alternate realities and then fabricating objects or artefacts from these fictitious worlds. Another focus of my art practice is on modes of display, especially in terms of the museum context. The phenomenon of the Wunderkammer has also been a direct influence - what drew me to these Cabinets of Curiosities was the sense of wonder and awe they inspired, despite their contents not always being entirely genuine. The artefacts presented here were created from a narrative that subverts the idea of a Celtic god - Cernunnos - into his opposite. Since Cernunnos was a god of life and prosperity, with a human face and antlers, I fashioned Sonnunrec, a god of death, pestilence and famine, who has a stag skull for a head. The artefacts present proposed remnants of this cruel deity and those who worshipped him.

(burst plastic ball, rose thorns, gilding) I am exploring the use of humble and undesirable everyday items, taking them from their environment and transforming them into a visual statement - changing them from items seen as irksome and metamorphosing and combining them into a curiosity. The heart of this piece is playing with opposing apothegms (pithy expressions), e.g. ‘thorny issue’ - a situation that needs to be handled delicately not to cause upset and ‘burst your bubble’ - shattering illusions or causing upset. The function of rose thorns is the protection of a plant whose blossom is highly regarded for its beauty. For me, they have a harsh yet practical beauty. I have gilded them to play with another adage - ‘gilding the lily’, meaning to unnecessarily adorn something already beautiful. The supporting structure, a burst plastic ball, has been cut and bent to create a pleasing ‘rose bowl’ shape (a gardening term used when pruning roses).

(grasspaper, dried grass, thread, wood) The Coat is part of a body of work I created on the theme of grass. Part of this work entailed planting grass in a Perspex display box and photographing it daily for 219 days. When the grass grew long I cut it and made paper from the cuttings. The Coat was made using this paper. As an image, the coat emerged in response to considering how grass covers much of the Earthâ&#x20AC;&#x2122;s surface like a garment.

(museum glass containers, ash, suspended metal) Introspective explores memory, loss, the unknown, subliminal and haunting relics of our past and present lives. Ritual, repetitive action, alchemy and substrate are integral components in my practice. I use materials that are rich in associations and investigate ways to transform them, often projecting new identities and layers of meaning onto the work in doing so. Making the work involves burning, cutting, shredding of previous works, of books, photographs, and letters. My work is curatorial in that it assembles, preserves and documents. There is a sense of finality in the doing, the burning, cutting and shredding. I am interested in the transformation. Like traces or remnants, the work points forwards and backwards at the same time. For the viewer I have no overarching authorial narrative and I do not want to provide resolutions but simply offer the viewer a complex palimpsest of ideas.

(cotton-printed photographs, stitching, ink) I got to live in twin houses. First it was no.22. I rented there with an ebb and flow of many people for over ten years. Then the family of an elderly neighbour, in the attached house, no.21, a man named George who I visited and whose stories I knew well, asked me to move in and housesit while he went into a nursing home. Over the wall I went. I moved into the mirror-space, a time capsule from the 1950s (an immense cabinet, in its way). It would be three more years before I left that road for good. Over the time, I captured these two spaces, used for two very different forms of family, biological and rental, in photography. I printed the images onto cotton, and rubber stamped them with the stories of the spaces, the names of the tenants. The strips of image were stitched into faithful-ish floor plans that can bend and fold. They are memories collected, subjective and sincere. The ideas of house and home resonate for all ages. Stiff architectural drawings can dehumanise spaces. Likewise the format of vitrines can disrupt the intimacy of objects. These sculptural books I hope will elicit in viewers thoughts of subjectivity and their own intimate rooms.

Morwenna Lake Unholy Crown (birch bark, cotton thread, oak galls, pins, cotton canvas) This object was procured by my Great-grandfather, Aloysius Whipple, during his gap year in the Alaskan wilderness. He kept this one from the many he collected that year and it has passed down through my family to me. It is he who gave it the name, Unholy Crown, because it resembled a hat, but the rows of sharp pins would make it unwearable. Later research revealed it to be a ceremonial fertility fetish, probably belonging to a now extinct tribe whose identity and language are lost in the mists of time. Some scholars attribute it to the Tiktaks of North East Alaska, others to the Pako Maks of the North West, but no definitive identification has been proved. Its intriguing because it does not seem to have an obvious purpose. Is it a functional object or simply symbolic? Was it actually used for ceremonies? It is an enigma that remains unclaimable and unknowable.

Bina McLoughlin dazzled a small region of Ireland for 70 years as the ‘Queen of Connemara’ until her death in 2001. Bina was part shepherdess, storyteller, ballad singer, actress, local celebrity, animal lover, political aficionado and – some say – even a witch. She was as loved as she was feared. In her Leenane cottage, Co Galway, she concocted potions and cures which she stored in bottles she wrapped in sack cloth, then lacquered and painted them to keep her magical creations potent and fresh until they were required for her cures or spells. Allegedly, the renowned French artist Christo and his then girlfriend Jeanne-Claude visited her in the 1960s when they were on a cycling holiday in the West of Ireland. It is suggested that the artist made many sketches of the inside of her cottage during the visit. It is now strongly contested that Christo’s famous wrapped artwork sculptures were developed on his return to France after he became obsessed with trying to recreate visually the wrapped bottles he saw in Bina’s house. The bottles displayed here were found in the pantry of Bina’s cottage shortly after her death and have not been tampered with in any way. They will be returned to storage following the exhibition.

(Egg Cases of the Common Whelk shell Baccinum Undatum & found sea rope) Existing in the digital age, in a world of mass production, discarded manmade materials and found natural objects form the foundations of my art practice. Through the questioning and exploration of these materials, a dialogue unfolds between the manmade and the natural, the micro and the macro, the real and the imagined. In a fast paced and fragmented world, the unassertive scale of my work prompts the viewer to move in a little closer, allowing for the subtle connections between the internal and external environments to slowly come into view.

I work with real stories, my own or others, in order to create absurd, isolated characters and worlds. My work often investigates abandoned and disused spaces, and I have spent some time documenting abandoned spaces in Mayo. I am interested in investigating and reframing how rural Ireland is depicted in contemporary art. This piece I am proposing comes from a long series of work called Mary. The series focuses on my grandmother and her mental health in rural Ireland from the 1920s. The work is a model of what her living room looks like now, almost 18 years after her death. This is an accurate depiction of her mental state throughout most of her life. By placing her world behind the cabinet glass, it feels as though we are seeing something we shouldn’t. A private world. The Cabinet of Wonders is an ongoing visual art project at the Linenhall Arts Centre, Castlebar, Co. Mayo. From the time of the Renaissance,...

The Cabinet of Wonders is an ongoing visual art project at the Linenhall Arts Centre, Castlebar, Co. Mayo. From the time of the Renaissance,...