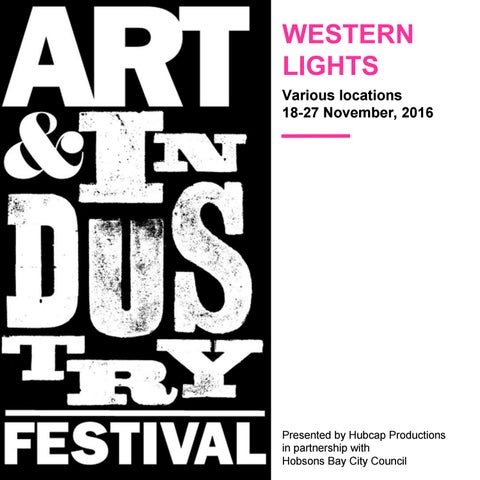 Art & Industry Festival Director Donna Jackson invited one of Australia’s foremost lighting designers, Phil Lethlean, to light some of Hobsons Bay’s most iconic industrial buildings and spaces. The structures included Westgate Bridge, Scienceworks Pumping Station, the Mobil ‘Take Five’ tank in Altona, Modscape in Brooklyn and the public artwork ‘Fire Within’ in Kororoit Creek Road in Laverton. The structures were lit at night from 18-27 November. Festival goers were invited to use cameras, tripods and smartphones to capture these illuminations, upload favourite images to the Art & Industry Facebook page and also enter a competition, with six photographs chosen after the festival to be printed onto postcards to promote the region. Western Lights 2016: Cyclist outside Scienceworks Photos: AKM Imran

The purpose of Western Lights was to dramatically mark the boundaries of Hobson Bay, using conspicuous buildings and well known structures in high traffic places to excite people and draw attention to the fact there was a festival going on. The project also allowed Artistic Director Donna Jackson a chance to collaborate with the lighting designer to play creatively with the shapes and spaces that are so familiar to residents of the western suburbs. Lighting designer and Williamstown resident Phil Lethlean was born in Newport and spent his early years there, returning to the West as an adult to raise his own children, so he has a finely tuned sense of the built environment. Phil and Donna explored Hobsons Bay together to choose appropriately bold sites.

The project was ambitious in scope given the relatively modest budget available, but the businesses involved were excited to be included and it was impossible to drive through Hobsons Bay at night and miss the installations. Hobsons Bay photographers responded enthusiastically to the creative provocation with 15 folios containing 60 entries received.

IMPACT OF THE PROJECT Impact on the artist As a seasoned lighting designer, Phil Lethlean enjoyed his involvement in the Art & Industry festival, relishing the challenges presented by Western Lights. “A lot of people saw the work and I felt very proud to be part of the festival.” Phil was also involved in lighting two other major festival venues, Williamstown Town Hall for Industrial Fashion, and Seaworks for SPARK, both presenting unique difficulties. “I really like the Williamstown Town Hall, Mum and Dad used to go to swing dances there, but it has an awkward white roof, so it’s like painting a canvas that doesn’t have a frame. You can’t contain the light. I ended up using the roof as part of the canvas, lighting it to suggest ‘soot’ for the old Newport Power Station and ‘water’ for the Mother Ship and Tugboat. Seaworks I know quite well but it’s a huge space, I’d love to conquer it one day. I’m only as good as the money I spend and I’d love to put more equipment in there.” Western Lights 2016: Westgate Bridge Photo: Lindy Allen