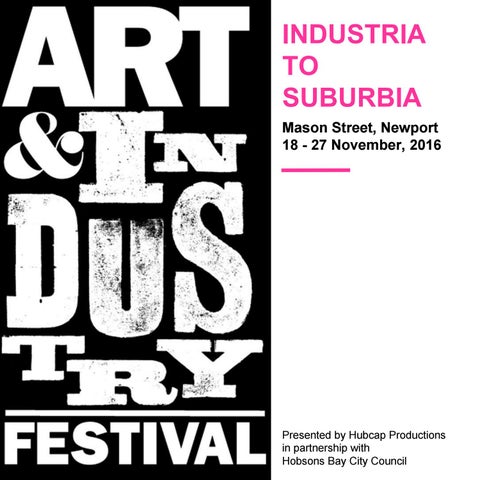 Business owner and sign writer Tony Mead, from the Industrial Art Sign Company, was commissioned by the Art & Industry Festival to use his signwriting skills to create street art in the main shopping area of Mason Street in Newport. After developing the design and preparing the walls for the work, he launched the project on Saturday 19 November with an artistâ&#x20AC;&#x2122;s talk. Festival goers were encouraged to drop in daily and watch the work develop.

Tony Mead is a traditionally-trained sign writer who has worked in the industry for 36 years. He established Industrial Art Sign Co in Spotswood in 1996. The architecture and repurposed industrial equipment in the inner-west has been a constant influence in his work and a key driver for his involvement in this project. His mural references the raw ingredients used by key industries in the area in times gone by including soot from the old Newport coal-fired power station, steam representing the steam works at the old Newport rail yards, salt as an element of boat building in Williamstown and sand, the main ingredient for the now demolished Melbourne Bottle Works in Spotswood. The work aimed to draw attention to the way so many Donna Jacksonâ&#x20AC;&#x2122;s project Dust: Adelaide SA 2013 industries have theatre disappeared along with the buildings from which they operated.

Tony hoped the project would give him a greater sense of connection to the area and also to the traditional skills of his craft which are fast disappearing. He wanted to profile what was once considered the best of trades, because you got to paint outside all day, and one of the hardest to learn. With the digital revolution, there is very limited interest in learning traditional sign writing. It is so much easier to use computers to find a stock photo online, add text and create an instant sign. His process was to use real photographs from each of the four industries depicted and reproduce them in â&#x20AC;&#x2DC;sign styleâ&#x20AC;&#x2122; as opposed to digital photographic reproduction and in this way demonstrate that the more traditional hand-painted craft of sign writing is still relevant and can co-exist with more contemporary means of production. During the festival he worked in the mornings and aimed to complete the mural by the end of the festival, but due to typical Melbourne spring rain, he finished in the following week.

THE IMPACT OF THE PROJECT ON THE ARTIST

Tony enjoyed the fact that passers-by were engaging with the developing work and would stop and talk to him. “People have stopped and talked about their relations who are actually in the pictures. People have been connecting with it really well.” He felt the creative benefits gained by sign writing in front of people were very rewarding. Being out on the street, hearing the noises of heavy industry, freight trains and fire trucks, interspersed with the sounds of children on swings in the nearby park reminded him that residents of the western suburbs are comfortable living amidst this; it’s the soundtrack of the West, you understand it when you work outside. The project positively affirmed specific HBCC objectives of: Community and business engagement Raising the profile of the city’s industrial sector

Tony runs his business as a digital and commercial business but his heart has always been in the artistic side. The project for him gave him a chance to explore what his business might have been in an ideal world, where the creative, hand-done side of industrial art was understood and appreciated. He enjoyed the fact that the project allowed him to promote that vision to people who stopped and talked to him.

Business owner and sign writer Tony Mead, from the Industrial Art Sign Company, was commissioned by the Art & Industry Festival to use his s...

Business owner and sign writer Tony Mead, from the Industrial Art Sign Company, was commissioned by the Art & Industry Festival to use his s...