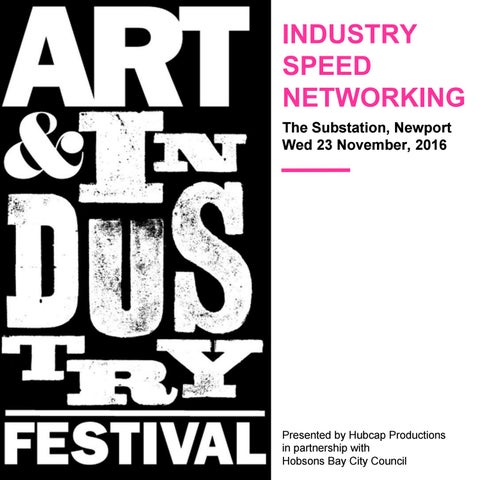 Hobsons Bay City Council partnered with the Victorian Chamber of Commerce and Industry to present a breakfast for local industry leaders and members of the business community to undertake â&#x20AC;&#x2DC;speed networkingâ&#x20AC;&#x2122;. Seated at two long tables in an upstairs gallery space at the Substation on Wednesday 23 November, 70 participants took part in intense one-on-one information sharing with the person seated opposite. Sharing sessions lasted two minutes and each participant was able to speak to at least 15 other people during the event.

Industry Speed Networking aimed to engage with operators from an estimated 6,000 strong business community across the municipality. Hobsons Bayâ&#x20AC;&#x2122;s rich and diverse manufacturing and maritime history has in recent times been enhanced with the influx of new businesses in the fields of construction, transport, logistics as well as smaller operators in professional services such as architecture, design, marketing, digital technology and financial services. Council viewed the event as an opportunity to bring the professional services sector together. While Council has an active business program that provides networking opportunities, this event was catalyst to further the reach of the festival and to foster information exchange within the context of a larger discussion about industry and Hobsons Bayâ&#x20AC;&#x2122;s local economy.

Bill Millard, Manager of Strategic Development at HBCC welcomed guests noting that the inaugural Art & Industry Festival presented an ideal opportunity for local businesses to engage in conversations about the changing face of industry in the West. He hoped the event prompted those present to think about how their business might engage with the festival in its next iteration in 2018. Lama Tiavo, Melanie Parks and Adrian Payne from VECCI facilitated the event. This model of â&#x20AC;&#x2DC;fast-forward event networkingâ&#x20AC;&#x2122; promotes quick and focused conversations as the best way to meet new people and make new connections. With each chat, participants have one minute to tell the other person who they are, what company they are from, why they are here and what they are hoping to gain from attending the event. The person opposite responds, and after two minutes, they both move on to another conversation. The networking itself lasted a total of 40 mins. The event was supported within Council by Janet Dawes and Tennille Bradley-Ow.

Those who had previously attended similar events found the context of the Art & Industry Festival provoked a different conversation about the role and contribution of the arts to business and community life. Attendee responses positively affirmed the following HBCC objectives: Capacity building “Presenting this as part of the Art & Industry Festival, just by its name, has attracted people from other arts-inclined businesses, and I find it really beneficial to catch up with others who have an art bent. It’s been a real delight.” Ailsa Page, AP Marketing Works

“Local events bring new business but also encourage people to think about strategic alliances with other small local businesses, and this is so important.” Amanda Mills, Green Light PR

Community engagement “The whole event was a tremendous experience. People want to meet others and connect and add value to each other. I’ve met so many people and I know this will help me. This is a great community event.” George Lui, Hope Financial Solutions

“I’ve never been to a speed networking before. I met a lot of interesting people. I enjoyed it.” Justin Koch, Justin Computers

“It was my first time at something like this. I’ve enjoyed it. I met a lot of people I could work with in the future and it’s been good to promote my business as well.” Rod Piloas, Beat Factor Music

Raising the profile of the city’s industrial sector

“The conversations today were about economic development in Hobsons Bay, particularly during this de-industrialising time when dormant factories present excellent opportunities for reinvigorating jobs and employment. Having this event as part of the Art & Industry festival is a good idea. There’s a natural fit between art and industry, not just in the traditional sense of making things, but in the sense that culture and arts in general attract people to an area and help grow the economy by contributing to a higher quality of life.” Councillor Jonathon Marsden, Hobsons Bay City Council

â&#x20AC;&#x153;I thought it was really successful. VECCI have a particular model with business networking, based on speed dating, which really works. People were genuinely vibed and excited. It was great to invite business people into a lively and unusual space like the Substation, the brick walls and the unfinished surfaces, and the beautiful aesthetic of the Toyota Altona Photographic Essay exhibition.â&#x20AC;? Janet Dawes, Manager Cultural and Economic Development, Hobsons Bay City Council

Hobsons Bay City Council partnered with the Victorian Chamber of Commerce and Industry to present a breakfast for local industry leaders and...

Hobsons Bay City Council partnered with the Victorian Chamber of Commerce and Industry to present a breakfast for local industry leaders and...